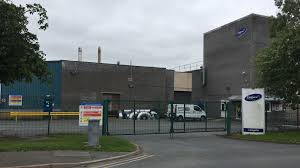 FIVE people have been taken to hospital as a ‘precaution’ following a chemical leak at a poultry factory in Anglesey.

2 Sisters poultry factory in Llangefni, Anglesey alerted emergency services to the leak this morning (Sep 6) at around 9.15am.

Two rapid response vehicles and three ambulances were dispatched along with the fire brigade..

The chemical exposure is being reported as ammonia.

No police presence was sent to the incident, which was being managed by North Wales Fire and Rescue Service.

Those that were infected were taken to hospital as a precautionary measure said a spokesperson for the plant, with the ambulance service confirming that no individuals needed medical attention.

A 2 Sisters spokesperson said: “Colleague safety is our number one priority, the factory was evacuated as per emergency protocols and the fire brigade and ambulance service quickly attended.

“The fire brigade advised when the building was safe to re-enter and they have now left the site.”

Those that were exposed to the leak are being checked at Bangor’s Ysbyty Gwynedd.