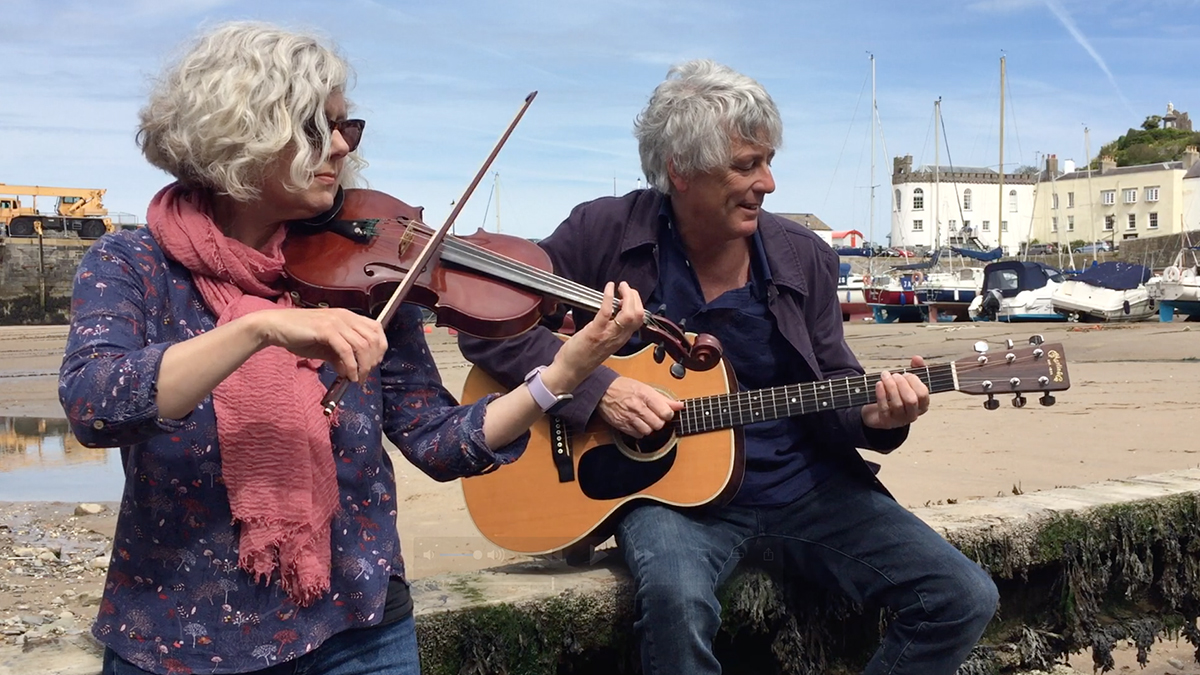 A musician living with Parkinson’s from Tenby, Pembrokeshire, has raised £4,314 with his wife for charity Parkinson’s UK, after posting a new song every day in May.

Duncan (56) and Rebecca Whitehurst (54) who form part of retro folk beat combo ‘The Lucky 12’ took part in the novel fundraiser as a way of thanking the charity who supported and advised Rebecca’s late father, John Williams who had Parkinson’s for 10 years.

Duncan was also diagnosed with Parkinson’s 10 years ago and first started to experience symptoms when he lost a bit of movement in the fingers of his left hand which limited his guitar playing. He kept working until three years ago when the condition made it too difficult to do his job effectively.

At one point, his Parkinson’s had progressed so much that he stopped playing the guitar and singing out of frustration. However, after a few months, he found different ways of playing that he could manage. The more he practised the better he got and eventually, started to write songs again, releasing an album in 2019 with his band ‘The Lucky 12.’

Parkinson’s is the fastest growing neurological condition in the world, and currently there is no cure. It affects around 145,000 people in the UK, including 7,600 in Wales. There are over 40 symptoms, from tremor and pain to anxiety.

Duncan said: “I heard about a speech therapy trial via Parkinson’s UK which my Parkinson’s Nurse managed to get me onto.

“It helped me to improve the clarity of my speaking and had the added bonus of strengthening my singing voice too.

“I still have difficulty doing anything much during unpredictable ‘off periods’ when my Parkinson’s symptoms return, so we have to make the best of those random moments during the day when the medication works.

“We hope we’ve raised awareness of the unpredictable nature of Parkinson’s and how people with Parkinson’s can do amazing things one minute and the next minute – nothing at all!

“Music is what we do, so we came up with ‘A Song a Day’ as a novel fundraiser for Parkinson’s UK. When we started out, we set our fundraising target to £500 – but it has captured the interest of a much bigger audience than we expected! We’re delighted to have raised so much for the charity!”

Parkinson’s UK is the largest charitable funder of Parkinson’s research in Europe, leading the way in driving better care, treatments and quality of life for those with the condition.

Ann Rowe, Head of Regional Fundraising at Parkinson’s UK, said: “We are so grateful to Duncan and Rebecca, for taking on this unique and fun challenge for Parkinson’s UK.

“With more than 40 potential symptoms, Parkinson’s can devastate lives. We’ve made huge breakthroughs in the last 50 years, but there is still no cure and current treatments are not good enough. Fundraisers like them help us to drive forward the groundbreaking research we need to transform the lives of people affected by the condition.”

To continue to sponsor Duncan and Rebecca, visit https://www.justgiving.com/fundraising/asongaday

RNLI on the lookout for new lifesavers across Wales