Home » A tale of two juries 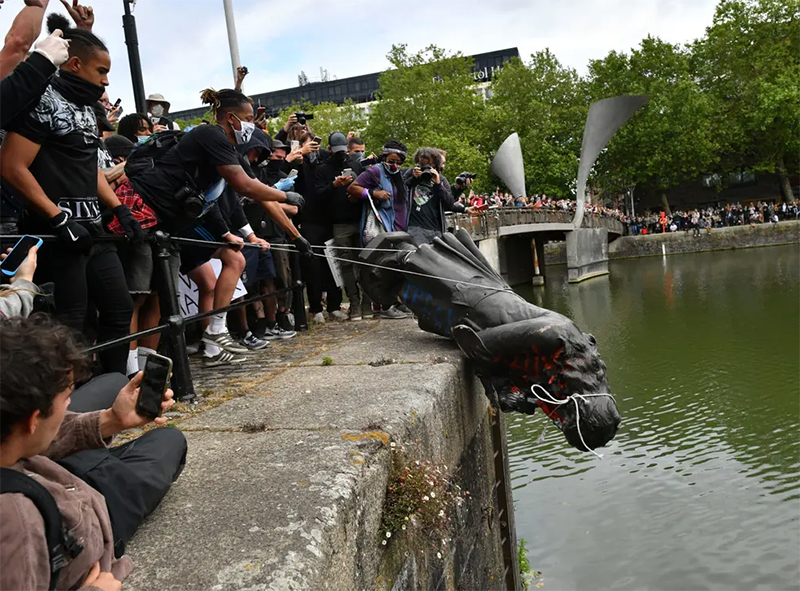 “I swear by Almighty God that I will faithfully try the defendants and give a true verdict according to the evidence.”

Let us hope that Almighty God is preparing a toasty place for the twelve good Bristolians and true who, on Wednesday and in a way difficult to reconcile with their oaths, acquitted the hooligans who pushed a statue of Bristol’s most generous individual benefactor into the city’s docks.

The statue-topplers ran a legally threadbare defence. The statue was itself a ‘hate crime’ against the city. People had been complaining to the Council about it for ages and the Council had done nothing. A historian explained that the institution of slavery –from which the defendants’ home city profited handsomely– is not as well-regarded as was once the case.

Millionaire Bristolian graffiti-dauber Banksy was similarly in favour of the statue coming down. With delightful irony, on the same day the Bristol jury let the Colston mob off, a man in Port Talbot was sentenced to 14 months imprisonment (suspended) for vandalising one of Banksy’s own works as a political protest.

The Colston vandals’ acquittal wasn’t really a legal decision by the jury, but a political one. In Bristol, you can’t hurl a half brick without hitting a Corbyn supporter and it isn’t difficult, picking twelve Bristolian citizens at random off the street, to find you’ve picked twelve raving lefties. It might have been naïve of the prosecution to expect any other result.

In any event, the question is academic because we’re not allowed to inquire about how they reached their decision. In England and Wales, it’s a criminal offence (section 20D of the Juries Act 1974, since you ask) for jurors to reveal any detail of their deliberations, or for anyone to ask them to. There are some exceptions which allow jurors to tell the Court if something seriously dodgy goes on in the jury room, but asking British jurors how they reached their verdict will usually get you locked up.

While we can only speculate at what went on in the jury room at Bristol Crown Court, we know rather more about the deliberations of the federal jury in Manhattan who sent Ghislaine Maxwell thundering down on charges of trafficking minors for sex. This is because one member of that jury –a man calling himself ‘Scotty David’– ran his mouth off to The Independent, boasting that he used his lived experience of sexual abuse as a child to persuade his colleagues that Maxwell molested children.

This disclosure isn’t illegal in the US. America has an uncompromising culture of freedom of speech, and some American jurists believe that transparency in jury deliberations prevents jurors from expressing bias in their verdicts, and gives the public greater confidence in the system.

As with secrecy around jury deliberations, jury selection is done very differently in America. Here, you get what jurors you’re (randomly) given and unless one of them is your ex-wife you have few grounds to object to them sitting in judgement over you.

There, whole trials are won and lost before a word of evidence has been heard, in the Byzantine course of US jury selection procedure. As part of this, Scotty and his fellow jurors completed a lengthy and invasive questionnaire, of which question 48 enquired: ‘Have you or a friend or family member ever been the victim of sexual harassment, sexual abuse, or sexual assault?’

If Scotty answered that question in the affirmative, it’s a bit odd that Maxwell’s lawyers didn’t immediately move to strike him from the jury. The question was followed by: ‘If yes, do you believe that this would affect your ability to serve fairly and impartially as a juror in this case?’

Put on the spot about his answers, Scotty suddenly went all vague. He ‘flew through’ the questionnaire, and didn’t remember being asked the question. If this is true, it’s rotten luck for Ghislaine Maxwell that Scotty wasn’t able to use his own lived experience of false memory syndrome to introduce a bit of balance in his advocacy to the rest of the jury.

American prosecutors absolutely hate it when jurors babble to the press, for reasons the idiot Scotty has demonstrated so well. There is a sporting chance that the case will be declared a mistrial, and Ghislaine Maxwell and her victims –if such they are– will have to go through the whole sordid business again.

It shows why we are right in Britain to trust jurors, and not to ask too many questions about how they do their job. Juries, like monarchy, are something of an historical relic. Like monarchy, the more light you shine on the process, the more anomalies you will discover. But also like monarchy, they work surprisingly well and getting rid of them is a pretty solid indicator that a country is going to the dogs.

However loathsome and despicable the decision to acquit the Bristol rioters, the jury who let them off demonstrated why jury trial is so important. And it isn’t a weakness of the jury system that, in political cases, they can behave politically.

Like the jurors under Cromwell’s dictatorship who ignored robust prosecution evidence to acquit adulterers, or the jurors who in 1985 acquitted Clive Ponting for sharing military secrets with MPs, they were fulfilling a jury’s most important function: ensuring that Parliament, judges and even the law itself never have the last word.