Badger amid the chaos 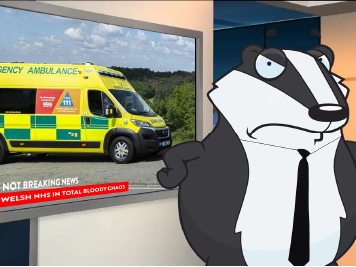 SUPPOSE you listen to the constant barrage of Welsh Conservative briefing about Labour’s chronic and gross mismanagement of the Welsh NHS.

In that case, you might be taken in and believe that in Monmouth, the NHS is a disaster area, and in Ross-on-Wye, it’s all peachy.

That assertion is not only bollocks but also bollocks on stilts with two-ton weights dangling from them.

Last Thursday evening, your furry friend spent an intriguing 45 minutes in the company of an ITV report that nailed a lie the Conservatives want to perpetuate.

To describe the Welsh NHS as dysfunctional is to miss the chance to point out it’s in total bloody chaos after two decades of gross mismanagement by Cardiff Bay.
However, to disingenuously suggest the grass on the other side of the Severn is greener is a lie.

It’s a lie that depends on assertion replacing forensic investigation.
For those of you – and that will be many – who missed the ITV programmer, Badger offers you the lowdown.

The programme demonstrated that the Ambulance Service in England and Accident & Emergency services in England are a shambles.

It’s not enough for Russell George, the Welsh Conservative shadow minister for health, or Conservative leader Andrew RT Davies to say that Labour in Wales has screwed the pooch.
That’s especially when the evidence shows the argument boils down to comparing abysmal and appalling.

The UK public’s view of the NHS (especially Welsh sentiment and sentimentality) means even hinting it isn’t sustainable or affordable is akin to rocking up to a royal funeral and curling one out on top of the coffin.

Resources for health care are finite; all health systems must choose how to allocate funds, no matter how funded.

However, a prolonged funding squeeze combined with rising demand means the NHS must take increasingly difficult decisions at both local and national levels.

The Westminster Government decided to atomise the NHS in England to encourage competition. It’s abjectly failed, and the result has been chaos.

The Welsh Government avoided the extremes of the English approach but embraced the possibilities inherent in atomisation to insulate itself from any accountability for its policy choices.

The complex web of funding formulae and procurement practices means NHS funding – especially in Wales – is less a flowchart of inputs to outputs than a mangrove thicket of duplicated effort and bureaucracy.

That is at one with the Welsh Government’s approach to public service provision.
In Cardiff Bay’s view, there’s not a pound that could be spent on delivery when £3 can be spent forming a working group stacked with the usual suspects before a consultation about setting up a delivery taskforce consisting of apparatchiks and more of the usual suspects, and so on until the end of another Senedd term.

The Welsh Government cowers behind public appreciation and approval of health workers’ efforts and snivels behind the science it selectively believes.

Criticising NHS performance, the Welsh Government claims cynically, is to criticise NHS staff.
It’s a shameless and offensive attempt to deflect criticism of its mismanagement.
Suppose you accept the Welsh Government’s claims. In that case, it is peripheral to the provision of NHS services, little more than a bank. It serves no useful purpose in health service delivery and may as well not exist.

Labour Ministers accept none of the blame when things go wrong – distressingly often – and all of the credit when things – rarely – go right.

It gets away with that stunt by offloading its responsibilities to Health Boards, NHS Trusts, many quangos, joint service boards, and advisory groups – none remotely democratically accountable.

However, delivery of an all-Wales service must account for Wales’s geography and rurality.
What makes sense in Cardiff, Swansea, Newport, Wrexham – and even Llanelli – will not work in Pembrokeshire, Gwynedd, or Ceredigion.

Suppose the Welsh Government is serious in its policy objectives.
In that case, it makes sense to scrap the entire apparatus of boards, trusts, and quangos to deliver a truly National Health Service for Wales through a single body accountable to a single Welsh Minister.

However, Wales is not an urban area like Manchester.

Accordingly, the Welsh Government needs two separate plans: one for South-East and North-East Wales and a separate plan for rural Wales. a
And Ministers – not unelected bodies – must be accountable for their delivery – otherwise, what’s the point of having ministers?

The Welsh Government must realise specific challenges exist in rural areas that don’t exist in the urban areas from which it draws its Senedd members.

One size does not fit all.

Services might be similar, but their delivery is affected by distance and connectivity.
Travelling from Bridgend to University Hospital Cardiff by public transport is one thing; getting from Castlemartin to Carmarthen is quite another.

For the Welsh Government to set a national health and social care policy and then wash its hands of the consequences is abject cowardice.
Yet that’s what it does, over and over again.

The approach, the cosy and corruptible status quo, cannot endure.
Changes must come.

The Welsh Government’s attempts to write itself out of its responsibilities leave it vulnerable to Westminster mission creep.

After all, if a Welsh Government is not responsible and accountable, what democratic purpose does it serve?

Young rugby stars are riding crest of a wave

Badger asks: ‘Whose truth is it anyway?’