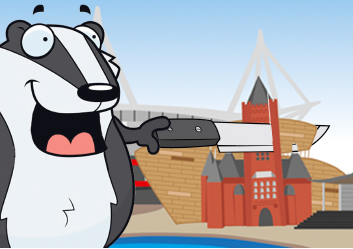 THIS week Badger wants to ask an important question.
What is the purpose of Adam Price?
What is he for?

What useful purpose does he fulfil?
Goodness knows it’s not holding Labour to account for the policies that will destroy rural Wales’s economy.

For a man whose reputation is as a dynamic orator and deep thinker, Adam Price has contrived to make the simple complicated and to hide his outrage at Labour’s failures in Wales.

Since the first Welsh Assembly, Plaid Cymru and Labour have engaged in a series of dances around political power, with the latter always taking the lead and the former left picking up the wreckage.

Before the last Senedd elections, Adam Price was – well – adamant.
Under no circumstances would Plaid prop up or support a Labour government.
Faced with the reality of Plaid’s irrelevance to large parts of the Welsh electorate, Adam Price soon found his principles negotiable and his campaign words hollow.

Adam Price said the week before last May’s election, “I think honesty is important. I think it is important for people to know that we wouldn’t under any circumstances enter into a coalition with the Conservatives.

“But on the Labour side, I think it was important to say we’re not interested in being a junior partner.

“Another five years, more of the same just fills me with despair, to be honest with you.”
There he is, everyone, Adam Price.
Filled with despair.

But wait!
Harken to the voice of the convert.
In March, Adam Price said: “We didn’t win the election. But, as so often in our history, we dusted ourselves down and resolved to win the argument instead.
“We snatched our moral victory from the jaws of defeat.”
At this point, some clarity: Adam Price is filled with despair but has a moral victory.
No.

He failed. He’s not even great at being a great disappointment.
Did you vote for the Cooperation Agreement last May?
Did anyone?

No, it’s a cosy party-political stitch-up funded by the Welsh taxpayer from public money.
Yes, readers, to support the whole shebang, there is a dedicated civil service working with a supposed opposition party to further the Welsh Government’s agenda.
It’s delivered nothing Labour didn’t want to, and Plaid has achieved less than nothing apart from shredding its rural vote.

All the Cooperation Agreement intended to deliver was a stitched-up electoral system that took power away from the electorate and put it in the hands of unelected and unelectable policy wonks and party managers.

You will no longer have a direct say in which person represents you. Party fixers will.
One of the new electoral combinations will cover over one-fifth of Wales’s entire landmass. And you will have no say about the identity of the person that represents you.

It will perpetuate Labour and Plaid’s dance of dismal failure, destroy smaller parties’ voices, and lead to an endless extension of cosy carve-ups and metropolitan stitch-ups on policies affecting rural Wales.

What a triumph of democracy Adam Price will deliver in exchange for the tawdry baubles of marginal influence and political insignificance.

All that big talk of a little country taking an independent place on the global stage.
Badger bets it sounds good when Adam Price talks to himself in the bathroom mirror.
It’s hollow rhetoric when he speaks at the nation.

Labour and Pallid Cymru have created a fiction that because Plaid doesn’t have ministers, the Cooperation Agreement isn’t a coalition.

It’s the usual playing with semantics in which Labour is well-versed:

“Independent” advisory bodies whose members are hand-picked by ministers from their mates in the third sector and academia.
jobs for failed candidates and former Spads.
Inquiry members who never inquire too closely.

And the Cooperation Agreement: a coalition in all but name.
It’s a sham.

Plaid is an organ of the Labour Party in Wales and nothing more.
And as an organ, it’s vestigial and purposeless – like an appendix.
Adam Price’s contribution to Welsh political debate is nugatory for someone who prides himself on his big brain and big thoughts.

Each week, when he can be bothered, he rocks up and asks Mark Drakeford to agree that the Westminster Government is dreadful.

You can count the number of times he raises issues for which the Welsh Government is responsible or criticises the Welsh Government on the fingers of one foot.
It’s a weekly free pass for Mark Drakeford, for a Labour Government with no interest in Plaid’s heartlands, and abuse of First Minister’s Questions.

A strong Presiding Officer would stop the weekly display of pattycake-pattycake.
But Elin Jones appears about as engaged in proceedings as the average inhabitant of Pembrokeshire.

She may as well be playing Candy Crush on her iPad.
The idea of the leader of a supposed opposition party not holding the party in power to account because they entered a Faustian power-sharing deal is not democracy.
It’s the usual backroom cosy stitch-up.

It’s like the new electoral system both Plaid and Labour want to ram through the Senedd. The Committee examining proposals was due to report on May 31.

On May 10, Adam Price and Mark Drakeford pre-empted its report and set out the new electoral system for Wales.

How odd, readers, that the Committee’s report repeated Drakeford and Price’s early announcement.
It was a carve-up.

The Committee was a waste of time and public money.
The members’ input didn’t matter. The civil service time spent on it and calling for evidence was wasted.

Like so much from Cardiff Bay, it was gesture politics.
And when it comes to meaningless gestures, Adam Price leads the way.
Badger knows few of you watch the Senedd, but it’s fair to say that Adam Price’s performance at First Minister’s Questions reveals his purpose.
Mark Drakeford’s backside won’t kiss itself, readers.

Matt Hancock made mugs of us all