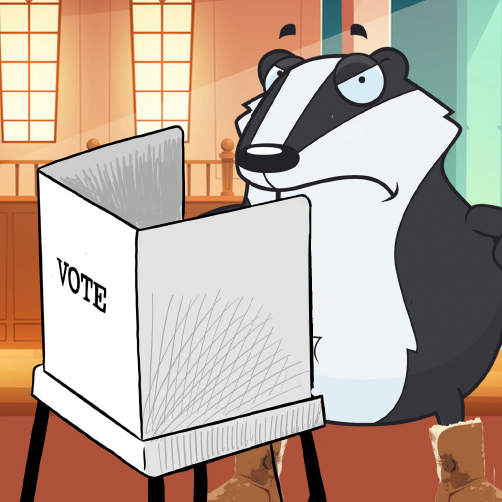 MAY 5 is local government election day across Wales.

Now every armchair critic and keyboard warrior has the chance to find enough people to nominate them, stand as councillors, and put things right.

I hope you’ll forgive Badger for laughing at the prospect that any of the usual Facebook moaners will stand.

Whingers, as Badger suspects those who whine the most know, are not winners.
There’s a type of person who is born to complain and moan.

Many of them live in Fishguard, or, as Badger likes to think of it, Cape Dismal.
A complainant resident in Cape Dismal moans about the lack of a footpath to save them following the pavement to the supermarket; someone does something about it; the complainant complains it’s not done right; it is inconvenient for all manner of hypothetical pedestrians, including one-legged invaders from the Planet Spog.

There’s no satisfying some people: there’s not much reward in trying to sometimes. Too many people are selfish, interested only in their narrow needs and wallets.

Generally speaking, most people who stand for public office do so in the hope of helping their communities. Those elected face the prospect of five years of being whinged at by the uninformed, ill-informed, and misinformed.

Badger has said it before, but for the benefit of the hard of thinking, the money allocated to Pembrokeshire by the Welsh Government is not allocated for funding Withybush Hospital.
The money allocated to the County Council for regenerating town centres cannot be spent on der kiddies and keeping A&E in Haverfordwest.

That’s not how public funding works.

Badger recalls Dr Chris Overton standing for Parliament. If he was elected as MP for Preseli Pembrokeshire, he said, he would bang on the door of Number Ten Downing Street demanding answers.

He’d have found no help there: health is a devolved policy area. Moreover, each Health Board sets its priorities based on guidance from the Welsh Government.

Picketing Cardiff Bay won’t make a ha’porth of difference to Hywel Dda UHB. And neither will be telling the Council it ought to pay for Withybush to keep A&E.

Let’s consider what councillors can do for their electors. Councillors are not delegates; they don’t consult with their electors on voting before casting one in the Chamber. That means you elect a councillor you think best represents your ward’s priorities in those areas of policy councillors over which councillors exercise some control.

Nary a week goes by without a photo of a councillor wearing a suit, looking troubled, and pointing at a stray turd in a car park.

Usually, they’re vowing – they always vow – to bring it to Council officers’ attention for action.
Occasionally, they might propose a motion about unwanted motions in public spaces.
But we’ll be clear about this: councillors, whether individually or collectively, do not control the Police, nuclear weapons, and – in many cases – not even where money from the Welsh Government can be spent when it’s part of the Council budget.

Nevertheless, councillors are the most important politicians with whom you’ll have contact.
That’s because they are directly connected to you by the “trivial” matters beneath the central government’s interest.

Improving outcomes for their ward means an improved quality of life for them and improved re-election chances.

Because county councillors live in the communities they serve (well, for the most part, that’s where they live), it’s easy to assess how well a councillor’s done by looking at how much improvement they’ve secured for their communities.

If your ward hasn’t improved; if your councillor talks big but delivered little; if they’re grandstanding jerks; if you’re not satisfied with them, you can vote them out (or stand against them.

All those who spend so much time whining about a lack of democracy can do their best by participating in it and voting.

Every vote counts in every ward. Thirty votes here or there make a huge difference. A very large number of council seats are marginal.

This can have some interesting consequences, a large following on social media from across the country for a councillor, a page, a group, or a campaign might have zero impact on an election’s outcome since too few of those communicating on social media live in the marginal wards where they can make a difference.

A strong door-to-door campaign, like the old days, works best.

Social media depresses interest in local politics by turning it into a warzone. It discourages voters by selling the idea “they’re all the same” (whoever “they” is, they are not). Worst of all, it promotes the idea that councillors can’t make any difference when they most assuredly can and do: only loons and goons believe the contrary.

Whether you follow a party or not, you can make an immediate difference by doing more than voting. Stand.

Nominations for all local government elections open on March 21. The closing date for nominations is April 5.

Badger is fed up with those who say “somebody must do something about it” but never think that somebody might be them (snivelling on social media and demanding councillors take notice of your whining doesn’t count).

Again, Badger will repeat something he’s said before; it’s a citizen’s duty to vote or offer themselves as a candidate for election.

Do one, do the other, do both. But don’t sit back and do nothing.