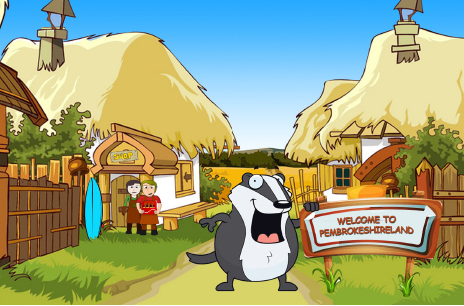 Beaches, countryside, and villages are all curated carefully to meet the needs of people who don’t live in Pembrokeshireland Inc.
And the castles!

Or rather, it doesn’t.
Regarding Heritage-balls, there is something worth bearing in mind: the power of invented tradition.

Many “traditions” appearing or claiming to be old are often quite recent in origin and sometimes invented.

A lot of tradition is a fabrication intended for propaganda or social purposes.
Badger knows he treads on sensitive ground here.
Pembrokeshire’s residents’ famous stubbornness and individuality have an almost totemic status in our County.

Folktales, fake history, and fiction are hardwired into our collective consciousness.
That does not make them any more real than Man in the Moon marigolds, readers.
Stubbornness should not stand in the way of the truth.
Pembrokeshire is an exceptional place:

A combination of different Welsh traditions
An area of unsurpassed beauty
One of the poorest counties in Wales
Only in Pembrokeshire do people cherish poverty and embrace it as an economic driver for Pembrokeshireland Inc’s success.

The problem with statistics is that the base from which they operate differs from one source to another, and many people have long forgotten the differences between the types of averages they learned in school.

Average income is no more than adding everything together and dividing the result by the number of households. That produces the mean.
It’s a crude and unreliable measure.

Rising average wages do not show the reality behind people’s experiences, where wages have fallen further behind the mean.
The mode shows the real picture.

The mode shows how income is distributed across the population and what most households earn.

In large parts of Pembrokeshire, the average (mean) income is below £25,000.
That’s over £12,000 a year less than the UK average.
The mode of household income (remember, that’s the most common total income earned) is around £19,000.

Another point worth considering is that, like the rest of Wales, the largest employers are the public sector: the County Council and the Health Board. That buoys the average income because those workers get their pay subject to national pay scales.

Goodness knows what Wales’s average wage would look like without its bloated public sector and the unequal concentration of well-paid jobs in a few locations.
Badger suspects most workers would take home the present-day equivalent of whatever Victorian boy chimney sweeps earned.

In Pembrokeshire, the biggest employment sector outside the public is tourism, leisure, and hospitality.

All of which serve to underline that Pembrokeshireland Inc pays the largest chunk of its workers barely more than the minimum wage for doing insecure, seasonal, and part-time work.

Imagine a career path from scrubbing bogs in July and August to working in a cafeteria from March to September.

There is only one way an economy based on that business model ends, and it’s already happening.

Pembrokeshire’s young population is in decline.
Bereft of opportunities to get well-paid jobs or build careers, the young are voting with their feet.

The effect on Pembrokeshire’s future will be grim.
Generally speaking, those left in the employment market will be those unable or unwilling to leave the County because of a lack of skills, familial obligations, or a combination of both.
The population will age, the numbers are already alarming, and so people working in the private sector will have two population sectors to serve: those who visit Pembrokeshire to enjoy themselves in agreeable surroundings and those who’ve moved here to die in agreeable surroundings.

A free-market economist’s wet dream is a supine workforce willing to graft for pennies because there are no alternatives.

Low wages topped up by in-work benefits will make higher-paid jobs – even marginally higher-paid ones – unattractive.

As ever, Westminster has the problem the wrong way around: it’s not benefits are too generous; it’s that wages are too shitty to encourage people away from them.
The incentives to work are higher wages and greater opportunities for advancement.
But Pembrokeshireland Inc prospers because those factors are not on the table.
The result is poverty.

There is no single best measure of poverty, but the one most commonly used is where household incomes are less than 60% of the median national income.
The median is another one of those averages you learned in school.

Any household with a gross income of less than £18,500 per year is in poverty.
An economy based on seasonal work embeds poverty.

Workers can seldom move up the ladder. They only move along one of its rungs.
It’s an extractive and exploitative economic model.
And it’s a model that the owners and operators of Pembrokeshireland Inc are keen to continue.

Welcome to Pembrokeshireland Inc, the land of no opportunity.

Follow Team Wales in the Commonwealth Games on S4C

Kill Geronimo the alpaca, and quarter of a million badgers too