Home > Comment > Badger and the cashpoint of the gods
Badger 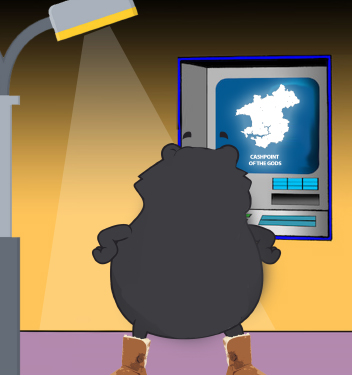 LAST week Badger was rather peevish.
He is royally fed up with the defence of a low-wage and low-skill economy as Pembrokeshire’s only means of economic “success”.

The truth is, as everyone with any sense of historical perspective knows, before the coming of oil refineries to the Milford Haven Waterway in the 1960s and their gradual decommissioning, Pembrokeshire was always a low-wage economy.

The County’s long association with the armed forces had dwindled after the Royal Dockyard’s closure in 1926. The Second World War provided a temporary return to relative prosperity in a time of huge privation.

Pembrokeshire was out on a limb, geographically and economically.
During the Thatcher recession of the 1980s, Pembrokeshire suffered more than most areas. The old skilled jobs disappeared and, since then, wages have fallen in real terms across our County.

Like the rest of Wales, Pembrokeshire depends heavily on the public sector for permanent and well-paid employment opportunities.

That’s why cuts to public sector budgets hit our County hard. We had no fat in the system to trim, and soon the austerity policies between 2010 and 2015 cut deep into the bone.
That is bad enough, but worse lies ahead.

The 2021 census provides some sobering data for Pembrokeshire to consider.
Young people are leaving the County. The number of people under thirty in Pembrokeshire has fallen like a stone dropped off one of Pembrokeshire’s majestic coastal cliffs.
In their place, the proportion of older residents has climbed.

Whereas young people generate tax income and economic activity through work, those beyond working age tend to be capital-rich and less inclined to contribute to economic activity other than as consumers of goods and public services.

Moreover, as people continue to live longer in poor health, they consume public-sector resources through health and social care.

Last week, Badger spoke about mathematical averages and how they can deceive readers.
According to the simple average, the average age of death is around 81 for men and a couple of years more for women.

However, the mode – the largest cluster – shows 87 and 89 years, respectively.
Throughout human history, the average age has been skewed. Generally, once you get to a certain age, you are likely to live far longer than the average.

That has a significant effect, especially when it comes to considering provisions for post-work life.

When Lloyd George introduced the first Old Age Pension, statistical probability indicated that very few of those eligible for the Pension would live long after retirement age.

When Churchill’s wartime government adjusted the pension rules, the situation had not much changed from Lloyd George’s time as Chancellor around thirty years before.

Attlee’s Government tinkered with the rules again; however, they relied on data showing lifespan had not much lengthened. Therefore, the number of people receiving the state pension rose only moderately.

Despite lifespans measurably increasing, successive governments did nothing about the UK’s changing population profile and what it meant for public sector budgets.

Governments knew what was happening but did nothing for a very simple reason: as people get older, they are likelier to vote.

Instead of tackling the obvious and loudly ticking demographic timebomb through taxation and budgeting for increased demand for public services, successive governments – mostly Conservative with an occasional outbreak of Labour – either did nothing or tinkered at the edges of the problem.

The result is a catastrophe, and the most catastrophic effects of previous and continuing government inaction are felt most severely in places like Pembrokeshire.
Badger will expand upon that point a little later, but first, some basic arithmetic:
In February 2021, 12.5 million people were of State Pension Age, 29% claiming more than one benefit.

The entire UK Government spend on the State Pension alone is over £100 BILLION a year.
Since 2000/01, UK government spending on state pensions has increased by 62.5 billion pounds.

That’s £100bn+ on one of the lowest pensions in Europe.
The total pension bill, factoring in other benefits claimed by older persons, is a fraction under £170 BILLION.

As a point of comparison, the total welfare budget for the UK is around £212bn.
Badger will do the arithmetic for you: 80% of all welfare spending is spent on benefits for those past the state retirement age.

There will be some dim souls out there who would gamble that those cursed shirkers (Boo! Hiss!) must get more.

The total amount paid for unemployment benefits in the UK is £1.6bn.
For those of the arm-lifting tendency, the total amount spent on asylum seekers (including all expenses associated with processing claims and providing temporary accommodation) is around £700m.

The idea pensioners miss out because of those damned immergrunts is a malign fantasy spun by deluded useful idiots and PayPal “patriots”.

Now, the value of the state pension is such that if a person in England owns their house free – or almost clear – of mortgage, the economically sensible thing for them is to sell up and buy a house somewhere cheaper.

Hello, Pembrokeshire!
In one of the less salubrious spots in Reading, a two-bed bungalow will sell for over £400,000.

If you’re Harold and Peggy and both want to move somewhere nicer, a better property in Pembrokeshire can be yours for under £200,000.

Do the arithmetic yourselves on that one, readers.
Cheaper Council Tax, pleasanter surroundings, more disposable cash: it’s Pembrokeshire (or somewhere like it) or bust.

That sort of population movement brings consequences: the prices of properties in Pembrokeshire rise; local people, young and young families, are forced out of the housing market and go elsewhere; and Harold and Peggy become consumers of Pembrokeshire’s social care and health resources.

And if they move when Harold retires at 65, they will consume those services for another twenty-odd years.