Home > Comment > Badger and the nature of the beast
Badger

Badger and the nature of the beast 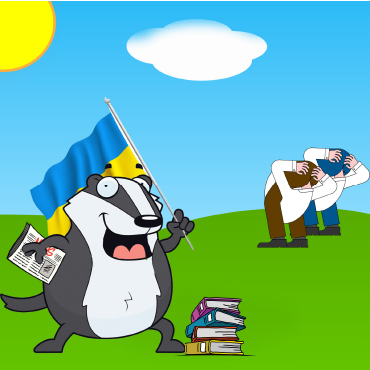 BADGER is a parochial sort of beast.
He loves this county, loves Wales, loves being away from the noise and chaos of the world beyond. He is not an urban badger, rooting among the bins and nibbling at feline roadkill among the streetlights.

Badger likes the twilight and dark skies in the countryside, the feel of leaves, grass, and sand beneath his paws, and the soft crunch of hedgehog in his jaws.
Badger is content with the physical comforts of his existence and how and where he lives.
Badger is in and of his nature.

However, Badger is also a keen and critical reader, a sponge for knowledge, and a keen student of events beyond our lonely county on the fringe of everywhere.
Many of Pembrokeshire’s inhabitants believe that we are immune from wider events because we are a small county and different in many ways from our neighbours in outlook.
They’re ill-informed, pig-ignorant oiks with their heads jammed up their bottoms while they search for what makes them exceptional. Badger has news for them: their crap is the same as everyone else’s.

Pembrokeshire is part of the world and, to a greater or lesser extent and depending on our means, what happens outside Pembrokeshire affects all of us living here.
Badger’s columns have focused on Pembrokeshire in the last few weeks because, frankly, a lot here needs fixing. But fixing Pembrokeshire cannot happen without outside help and change beyond our borders.

If the invasion of Ukraine ends with Ukrainian grain cut off from the European market, the cost of bread will rise. Fuel prices will rise. The continent’s security will be at risk, and the wider effects on western economies will tighten states’ wallets and damage all of our lives.
The price of Russian success will be making all of us that little bit poorer than we are and a hell of a lot less secure.

The ongoing weakness of western liberal democracies is a belief that what Vladimir Putin does is abnormal; the invasion of Ukraine is an aberration; sooner or later, history will move on.

It’s total drivel.
The sweep of human history is the history of scheming, murder, and the use of force and arms against dissent and the different.
All of that is normal. It is human nature.

That primal force motivating us is moderated by religious faiths and a collective unwillingness to face the barbarous side of our nature.

We lie to ourselves, and, while they kill, blackmail, bribe, and use violence, our leaders lie to us and extol virtue and self-sacrifice in public. We know they lie; they know we know they lie, and they are happy to bind us together in a comforting myth of exceptional national virtue.
We lie, cheat, steal, and kill, but we choose to believe we do those things for the right reasons.

And that – in general terms – applies to every nation and every community.
That is normality.

One of the problems, for example, is how we define “corruption.”
In traditional societies, helping one’s kith and kin is normal. Putting projects out for competitive bidding is downright hostile.

The law and the means of enforcing it exist because humans have a violent and acquisitive streak.

It’s not for nothing that nature is red in tooth and claw: not for all the soy milk in Waitrose.
Like flowers, humans need careful cultivation in the garden of a society bounded by rules and protected from itself and pernicious growth.la

Ignore the weeds growing in the garden, and they will soon overtake you. Your precious ornamental shrubs and bedding plants can’t compete with a vigorous weed’s persistence and vegetable determination.

You must head off weeds before they overwhelm you.
That’s how gardening – and arable farming or horticulture – works. The plants we grow for pleasure or consumption need protection.

That also applies to foreign affairs.

Peace is not normal between nations. War and conflict are normal. Since the time of Ug, the caveman hunter-gatherer, people have fought for resources, power, revenge, and the fleeting attraction of comparative prestige.
Vladimir Putin’s relentless determination and single-minded focus on acquiring power and resources is normal human behaviour.

At the personal level, the glory of Russian success overseas reflects on him and feeds his self-worth.
Western liberal democracies choose to believe in the relentless march to a world in which everyone is nice to each other because it’s nice to be nice. Their leaders have no idea how to deal with Vlad the Invader.

He doesn’t fit into their view of history’s grand narrative and the thrust of progress.
He doesn’t care about their praise, still less their scorn. His motivations are incompatible with theirs.

They’re like enlightened monks on barren islands and coasts who, for two centuries, couldn’t understand why Norsemen persisted in harrying and laying waste to their monasteries, stealing their treasures, and seizing their lands for themselves.
Imagine those monks in their windswept and lonely towers unable to comprehend the Vikings’ indifference to Christianity.

Western democracies stare on in the same incomprehension at Vladimir Putin.
Wars between democracies are rare. Since 1945, there have been many wars, but – apart from the wars in the Balkans – none have happened in Europe. That’s led to a collective delusion that stability is normal.

Since the collapse of the Soviet Union, European and western democracies have disregarded their security and believed that – as if by magic – human nature has been fundamentally changed; that we are now all rational and peaceful by the inevitable progress of the calendar.
That, too, is a delusion.

The most deluded give comfort to someone who means us nothing but harm by trying to “stop the war” by protesting in London, instead of in Minsk or Moscow, where their efforts would be better directed.

Badger is as one with his fellow – and far more brilliant – columnist Matthew Paul on this one: western inaction against other Putin aggressions and denuding our armed forces of capacity have encouraged a Russian belief that they can act with impunity and without fear of meaningful reprisal.

We have ignored our nature and failed to recognise it when it’s been in plain sight in front of us.

We either act collectively or get picked off one by one.
Putin’s gamble is that we will, terrified of ourselves, choose the latter.
We must stand together. We must stand with Ukraine.

Badger and the Silly Season

Cadno: Say hello to the nutters on the campaign bus