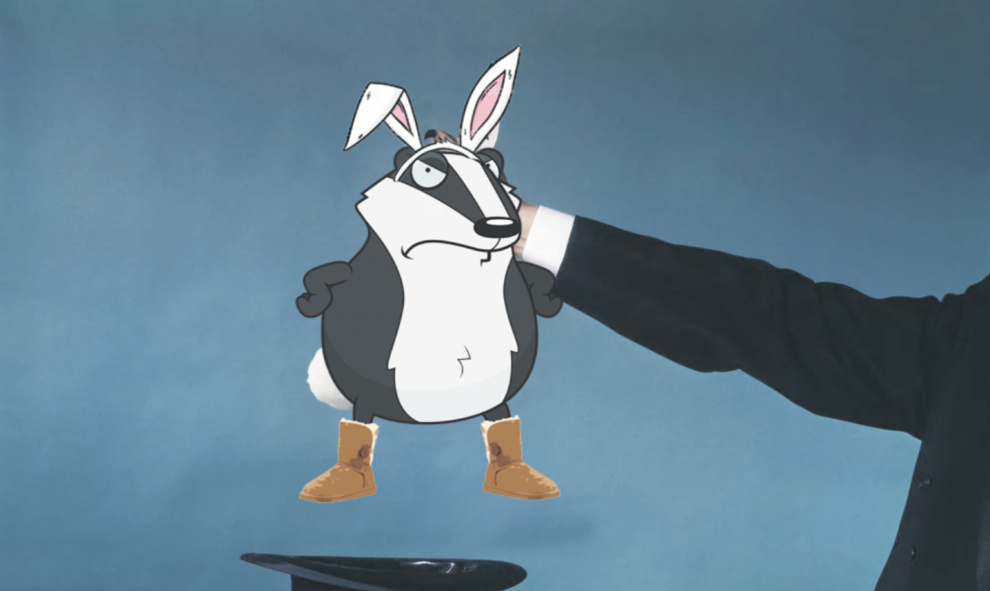 In Badger’s world, that counts as the very heights of ecstasy.

Badger never thought he’d be overjoyed at the prospect of a haircut. In recent years, Badger has been more concerned about having more face to wash and less hair to brush. However, the lockdown has forced Badger to reconsider his view on visiting the barber.

Mrs Badger is also very pleased. There’s only so often Badger can make jokes about her growing resemblance to Beaker from The Muppet Show without being threatened by a grievous bodily frying pan.

If not quite the full ‘yippee!’ there’s certainly a bit of a ‘yip’ in the air.

There’s even the suggestion of a holiday to visit Badger’s great uncle Vlad back in the Old Country. Poor old Vlad has had bad press for centuries. His reputation was scarcely enhanced by the ill-informed reportage of his visit to London by Francis Ford Coppola. For the record, Vlad has never worn peculiarly tinted sunglasses. The hairdo was spot on, though. They’re short of good barbers in Transylvania. Or, more precisely, short of barbers prepared to visit Uncle Vlad’s sett.

Badger has no idea why that is the case.

Here, in Wales, Spring’s arrival came along with Wales’ Chief Weasel, Mark Drakeford, appearing on the television to spread a little happiness in his usual gloomy and despondent way.

Last week, much–deserved mockery was directed at the Victorian serial killer manqué who leads the House of Commons. Jacob Rees Smug suggested the House of Commons might grace Cardiff Bay with its presence once in a blue moon. The suggestion is rich in the potential for unintended comedy gold.
It’s a bit like asking Lee Waters to point to Dolgellau or Crymych on a map. Badger can see the member for Llanelli ending up in Margam Park, convinced he’d found ‘rural Wales’. Or, in Cardiff Bay speak, ’a far away country containing people of whom we know little.

The Westminster government is proof that newspaper columnists (ahem) and second-rate lawyers make for a poor government. However, Cardiff Bay is out on its own in proving that a background in third-sector organisations and political hackery is almost as bad.

Look at the current Welsh Cabinet, readers. Mark Drakeford was a special adviser to Rhodri Morgan, Vaughan Gething, Hannah Blythyn, Rebecca Evans, Lee Waters, Ken Skates, and Lesley Griffiths all – at different times – worked in the officers of Labour MPs or MSs. Jane Hutt worked in the third sector, notably for Chwarae Teg. Before becoming an MS, Lee Waters was involved with Sustrans (whence his interest in Zeppelins as a viable transport solution for rural Wales) and was Director of the Institute of Welsh Affairs. Vaughan Gething was President of the Wales TUC. Before that, Mr Gething was a lawyer.
The one thing all of the above have in abundance is a lack of knowledge of a world outside the narrow confines of politics or organisations tied closely to politics. They are professional politicians and proof – were it needed – that hanging around other politicians does not make for better decision-making in government.

At least Jeremy Miles and Julie James had proper jobs immediately before entering the Senedd. They were lawyers.

When Dai Lloyd speaks on health, you listen. He knows what he’s talking about from experience at the sharp end.

As a farmer, Andrew RT Davies’ best performance came in the Shadow Rural Affairs brief. A round peg found a round hole.

Respectively up against them were Vaughan Gething and Lesley Griffiths. Ministers with no personal experience working in or near the subjects about which they present and announce (not formulate) government policy.It’s government by sock puppets.Professional politicians have not better governed Wales. The way the Labour Party works in government reminds Badger of an event and individual in modern history, neither of which is often remembered these days.

In the dog days of the Macmillan premiership, the old actor-manager convinced himself he was mortally ill. His successor as leader of the Conservatives was Alec Douglas Home. In the path of unintended consequences that dogged Tony Benn’s political footsteps throughout his career, he became prime minister through renouncing his hereditary peerage.

But Alec Douglas-Home was not the first choice of the Cabinet, from whom the Lord Chancellor took ‘soundings’. Their choice was Rab Butler. Macmillan couldn’t abide Butler, a fact known to those charged with canvassing the Cabinet. Oddly, the canvassing of Cabinet produced an overwhelming majority for the Earl of Home and the Hirsel.

The whole thing was blown out of the water by Former Minister of Health, Colonial Secretary, and Leader of the House of Commons at the time of Macmillan’s resignation, Iain Macleod. In a scathing book review, he described how power was carved up by a ‘magic circle’ of old Etonians.

We can guess – with ease – what Macleod would think of the current crop of braying Old Etonian ninnies in today’s Westminster Cabinet.

Turn the lens the other way, back towards the Welsh Cabinet, and Macleod’s conclusions would be the same. There’s a narrowness of vision at the heart of the Welsh Government. It arises from a self-selecting and self-sustaining ‘elite’ which values tribalism and loyalty above ability and competence.
It’s not a coincidence that the only concrete legislative achievement of the last five years, the National Curriculum, was piloted by a non-Labour minister.

Ministers’ connections with the outside world are filtered by their politically-appointed advisers (paid for by the public). The Welsh Government’s civil service is virtually indistinguishable from Welsh Labour, so closely are they entangled.

Devolution’s failures stem from the incestuous relationship between the state and Labour in Wales, from over twenty years of de facto one-party rule in the interest of one part of Wales and self-serving sectarianism playing to the gallery of special interests.

It’s a magic circle, of sorts, bounded by the Cardiff Ring Road.

‘For the rest of Wales, see afterthought’.