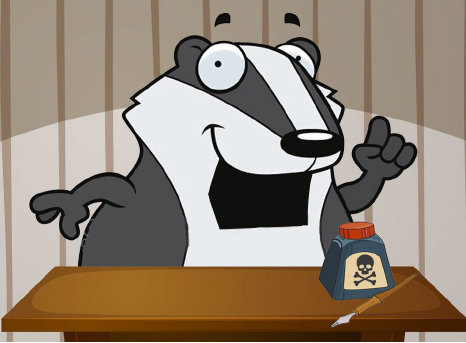 THERE’s quite enough about Putin’s War in Ukraine, refugees, humanitarian aid, and the Chancellor’s efforts to cut taxes he increased elsewhere in this week’s Herald.
It’s serious stuff.

Badger is all alongside being serious, but occasionally some levity is called for to counterbalance the hard news in which The Herald specialises.

In order to help you make your way through the weekend and beyond, Badger has carefully curated a selection of insults to use whenever you see a politician on the television, hear them on the radio, or appear in newspapers.

Insults are a wonderful thing.

A polished insult is best: something more than saying “Boris Johnson is a toerag” (or worse), or calling Mark Drakeford “Dripford”, which is not only tiresome but also uninventive.

Only sad sacks who backed Jeremy Corbyn think calling Kier Starmer “Keith” is funny. By drawing attention his working-class origins, you divide yourself from the majority of those upon whose votes you depend. Not everyone lives in a little metropolitan ivory tower with a degree in Combined Inhumanities from an 80s poly.

If you take time to craft an insult, you want it to do two things: amuse the listener or reader and spike the object of the insult where it hurts. And, if they don’t read the insult or see it elsewhere, it’s a shared joke between an exclusive set of people who can snigger along with each public appearance.

If you take time to craft an insult, you want it to do two things: amuse the listener or reader and spike the object of the insult where it hurts. And, if they don’t read the insult or see it elsewhere, it’s a shared joke between an exclusive set of people who can snigger along with each a politician’s public spoutings.

And there are so many targets from which to choose, especially in the current Westminster Government.

But why stop there?

Look at the Welsh Parliament!

Adam Price, for example, was once described in election literature as Mab Dagoran, Wales’s legendary Son of Destiny.

Nowadays, Mr Price is best known for shabbily reneging on his promise never to support a Labour Government.

The Son of Destiny has turned out to be the Bride of Frankenstein.

On the less generous side of the ledger, you could even opine: “He refused to back Labour until confronted with his irrelevance.”

And of Wales’s leader, Mark Drakeford, one might say that he shines only in comparison to the turd in Number Ten. That has the benefit of being a twofer.

The Deputy Minister for Climate Change, a man determined to power the whole of Wales with his own hot air, is Lee Waters.

There’s not a tree Mr Waters doesn’t like or a farmer with whom he’s a friend.

For Mr Waters, the world ends and begins in Cardiff Bay and the circle of lobbyists and interest groups whose members he rewards with appointments to key Welsh Government policy working groups.

Vaughan Gething, Labour’s Minister for Announcements and Aspirations, leans on his advisors so much, one wonders why he’s thought necessary.

The creases in Mr Gething’s suits are considerably sharper than his mind.

We must feel sorry for Eluned Morgan, Minister of Health, who (literally) took a hospital pass from Mr Gething.

Acting towards the Opposition as though her first name is “Baroness” is a little unbecoming.
Her demeanour is explicable as she’s unlucky enough to be lumbered with explaining and glossing over her predecessors’ twenty-odd years of failure.

The Minister for Alphabetti Spaghetti, Lesley Griffiths, did two jobs so badly in the last Parliament she now has three. Her brief includes rural affairs, with which she bears much the same relationship as Jack the Ripper did to his victims.

She can’t pass a field of productive farmland being sustainably managed without thinking of a glamping holiday.

That’s not miss out the opposition side. Led by Andrew RT Davies (again), the Conservatives’ favourite hobby of backstabbing each other far exceeds their capacity for taking on the Labour benches.

RT for example is a force of nature, in much the same way as a hurricane is a boon to the construction industry. Whole fields of policy are laid waste while the shrieking void over the Severn Bridge calls to him with a siren song of how much greener the grass is on Westminster Green.

He’s Foghorn Leghorn in a suit and serially loyal to whichever Conservative currently occupies Number Ten, no matter how contradictory their policies are.
But let’s look at Westminster, as well Michael Gove is famed for his personal politeness, which is astonishing as he has all the public charm of a collapsed slurry lagoon.
Rather like the late Sir Edward DuCann, he’s the sort of person who could go in a revolving door behind you and come out in front.

nsulting Boris Johnson is like shooting a very large fish in a very small barrel. That’s especially the case when you consider he has the look of a man who has fooled everyone, apart from his barber.
Dominic Raab, who looks like nothing so much as a man whose head is filled with wasps, has his own – barely concealed ambitions – to succeed his boss. And, if prisoners get the vote, he has a good chance. He is, after all, the serial killers’ choice for PM.

Liz Truss is so named because she’ll support anything and resembles a black hole as she’s so dense even light can’t escape her pull. While Jacob Rees Mogg is proof that an expensive education and enormous wealth are essential qualifications for being barmier than a box of frogs. Explicable, perhaps, by being the Minister Searching for the Snark of the Imaginary Upside.

And so, at last, we come to smirker-in-chief, Priti Patel.
Badger has a lot of time for Priti Patel, who has done nothing to dispel his feeling that she can only be slain by some sort of ancient religious artefact.

As recent events have underlined, she has the compassion of King Herod without the latter’s redeeming features.

Next week Badger will look at some of the prospective candidates for this May’s election to the County Council.

Another opportunity to get the green ink out beckons.

It’s time to close the book on Bloody Sunday