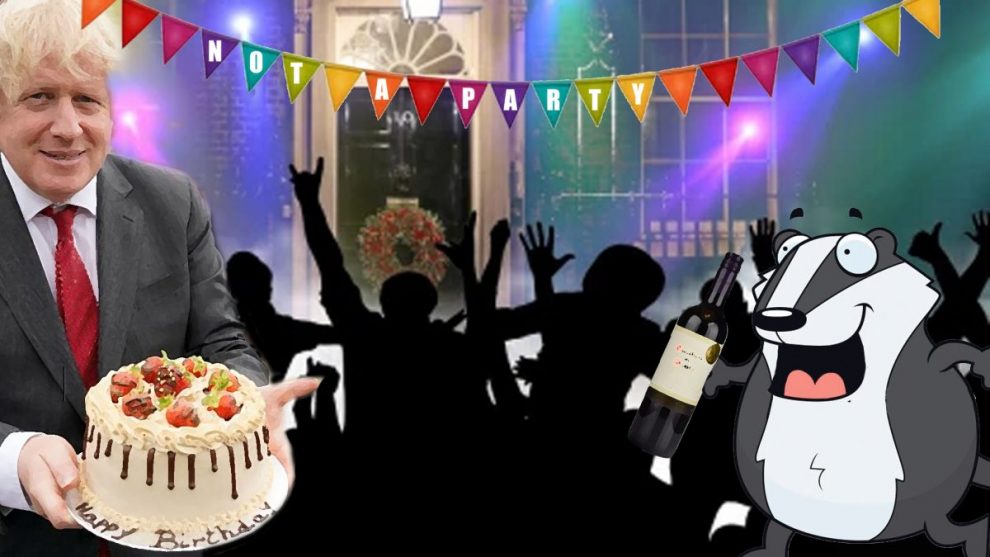 THE NEXT person who says that Covid is no worse than a cold will be taken outside and hung, drawn, and quartered.

It’s the only language they’ll understand.

Badger has contracted almost every respiratory complaint known to humankind in his time. He was once even hospitalised with pleurisy and spent a jolly few days heaving up pus and gunk while hooked up to doodahs and gizmos.

Apart from when Badger had an emergency appendectomy, he cannot think of a more unpleasant and draining experience.

What did not improve Badger’s temper during his confinement was the series of fever dreams he experienced.

While sitting in front of the telly coughing up what’s left of his lungs, Badger imagined that the Prime Minister, his ministers, chums, advisors, and staff spent the original lockdown in a succession of parties and drinkies.

Earlier this week, it seems that the PM’s previous shock and mortification at revelations that naughty people had held parties in Number 10 Downing Street was partly due to his forgetting he’d attended them.

There are three reasonable explanations for the PM’s current problems:

Nadine Dorries, Mr Johnson’s Culture Secretary, sprung to the PM’s defence in several interventions suggesting she is even dimmer and more loyal than the PM hoped when he appointed her.

Ms Dorries famously ate an ostrich’s anus when she appeared on “I’m a Celebrity Get Me Out of Here”. She now appears to have crawled so far up the PM’s spokeshave end that she can see daylight beyond his back teeth.

Hanging from the PM’s tonsils alongside her is Michael Fabricant MP. Mr Fabricant is the answer to the question, “What would happen if Tribbles took over the universe?”

And that leads to two other questions that vex Badger.

Has the homunculus dangled under the Tribble been excreted by it, or has the Tribble attached itself to a person, taken them over, and drained them of all humanity and self-awareness?

Mikey Fab has done such damage to the Government that Badger does not doubt that Kier Starmer will nominate him for a knighthood for services to the Labour Party in the next honours round.

Or maybe the Tribble will get elevated to the Lords.

With friends like those who’ve rocked up in interviews to defend him, Mr Johnson has little need of further enemies. However, the Whips’ Office is doing its darndest to encourage more to come out of the woodwork.

Mark Spencer is the Government’s Chief Whip. Having had his office directly accused of pressuring Conservative MPs with blackmail and withdrawing funding from their constituencies was not enough for Mr Spencer.

Over the weekend, a former Conservative Minister alleged she’d been told she was “too Muslim” to remain in the Government.

Mr Spencer fired out a tweet, self-identifying himself as the person who hadn’t said that to her at any stage and even if he did say it, he’d invited her to report him to the Conservative Party who would carry out its own investigation.

He then deleted his tweet and then sent out an even worse version that was one step up from saying, “I’m not a racist, but…”.

Mr Johnson then chimed in to recollect he’d discussed the matter with the former minister in question and told her to report it to the Conservative Party. Her response was smack on the nose: it was Government business, and the Government should investigate it.

Guess what? The Government is now doing so. Two years later.

Where that leaves the Government Chief Whip, responsible for ensuring even the most reluctant of nodding dogs on the backbenches will hold their nose and support the Government to pass or block legislation against their personal beliefs, is anyone’s guess.

Whether Mr Johnson stays or goes, a reshuffle is likely. Poor Mr Spencer could find himself sitting next to Gavin Williamson on the backbenches.

And that’s a fate worse than being Iain Duncan Smith.

Badger has every confidence that in his wish to cling to office come what may, the Prime Minister will find plenty of others to chuck under the bus in the hope its motor will stall on the pile of bodies before it gets to him.

If that’s the cream of the political talent available to him, Badger can only suppose a significant number of the remainder of Conservative MPs are cottage cheese.

The startling news that the UK’s Prime Minister is a petulant, bawling, snivelling, spoiled man-child who hosted a series of parties during lockdown while telling the rest of us to stay at home, watch elderly relatives die of loneliness through windows, not attend our friends’ and families’ funerals, and deny ourselves basic pleasures in the pursuit of the collective good… well, that could all have been a fever-dream Badger suffered while unwell.

It can’t possibly have happened in real life.

Badger supposes that any Cabinet member with an ounce of human decency or shame would never put up with that sort of malarkey.

They’d quit. And nobody has.

That fact, as they say, speaks for itself; they’re all right honourable, after all.