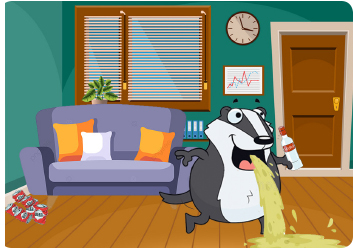 Badger believes in rights.
Somewhat against the trend, Badger also believes that rights do not exist in a vacuum.
With rights come responsibilities.

A right without an accompanying responsibility is a recipe for chaos or anarchy.
Take free speech, for example.

The right to free speech is justifiably constrained by the responsibility not to abuse it.
The law constrains the right of people to say what they please.
You may feel that it’s your right to shout “Fire!” in a crowded theatre.
If people die due to your exercise of what you feel is your right, you will go to jail, and neither pass go nor collect £200 along the way.

That is an extreme case.
Badger was much exercised by a debate at the County Council on Friday, July 15.
The debate involved a decision to designate virtually the whole of Haverfordwest subject to a Public Space Protection Order, otherwise known as a PSPO.

In summary, a PSPO allows Police and Police Community Support Officers to act against those who cause hassle in a designated area.

It aims to address the disruption caused by yobs and drunks in public spaces.
Badger believes the legislation underpinning PSPOs is well-intentioned but unnecessary.
The Police already have all the powers they need to curtail antisocial behaviour.
Badger even remembers when the Police had no problem picking up troublesome drunks in town centres without needing extra powers.

One particular toper might as well have had a season ticket to Haverfordwest Police Station’s cells so often was he lifted for disturbing the peace, causing a nuisance, or being drunk and disorderly in our county town.

The Police didn’t need a PSPO then, and Badger isn’t sure what one adds to the suite of tools and powers at law enforcement’s disposal to tackle yobbos and pissheads.
As far as Badger can tell, a PSPO just makes it easier for the Police to do something they could do already.

When Haverfordwest’s five county councillors first asked the Council for a PSPO, their request concerned a specific area around the skatepark.
Badger was right on board with that proposal.

Haverfordwest’s skatepark, a marvellous facility for those who wish to spend their lives undergoing orthopaedic surgery, was a gathering place where a few junior Fagins and wannabe Pied Pipers hung around with malicious and criminal intent.

Badger knows the apprehension and removal of one individual cut instances of antisocial and criminal behaviour by more than half.

And so did the Council. The information was given to them by Dyfed-Powys Police.
PSPOs also ignore what Badger knows from his previous profession: if individuals are going to get drunk, they don’t have to do so in public. Getting hammered at home on cheap supermarket booze is a damned sight more straightforward if you’re 14-17 than getting alcohol from off licences and pubs.

PSPOs have no effect on domestic premises.
If you’re young and determined to cause trouble, just get tanked up in a mate’s flat or on mum and dad’s tinnies and vodka.

Jacob Williams, a councillor for a ward in which antisocial behaviour is confined to driving a BMW with personalised plates, put his finger right on the button.
Where there is evidence to support action, such action should be limited to the areas where the problem occurs.

That has to be right.
A public consultation about the PSPO showed that of 13,000 Haverfordwest residents, around ten cared enough about the issue to provide an opinion.
Extending the boundaries of the Protection Order across what amounts to the whole of Haverfordwest from Lidl to the Railway Station and Freemen’s Way to the Fire Station is mission creep on steroids.

And outside the area covered by the Order, the Police still have all the powers they already had to tackle any issues of antisocial behaviour by any groups of whatever age.
Badger does not hold with this idea that there are bands of feral youths roaming Haverfordwest in the style of Monty Python’s Hell’s Grannies.
It’s a ludicrous proposition.

When he was younger, Badger lived in Pembroke Dock.
He remembers having a conversation with a police officer that set out an enlightened approach to policing.

Mentioning that pubs (this was at the time of stricter licensing hours) often had lock-ins, the officer said something along the lines of: “We know that, but unless the neighbours complain we have better things to do. We know where the idiots are and keep an eye on those places.”
And damned right, too!

That is the appropriate use of the force’s time and resources.
Why raid the Quiet Inn at 11:45 while four drunks nurse their pints in silence when there’s a riot at the Drunken Lout Club?
Common sense policing to a commonplace problem.
Badger agrees wholeheartedly with Jacob Williams – and he never thought he’d write those words while sober – that the Order covering Haverfordwest is a gross curtailment of civil liberties.

Imagine drinking in the Lower Three and having a bottle of Budweiser open in your hand while you head to The Friars.

It’s your beer; you bought it, and you’re quietly enjoying it.
There is no earthly way in which drinking a bottle of Bud causes a nuisance, alarm, or distress.
Apart from the fact it’s godawful swill, that is.
Besides, doorkeepers will ensure you can’t take it into the Friars.
It’s no more than thirty yards from one front door to another.
Along the way, an eagle-eyed officer of the law spots your offensive law-breaking conduct and, as you stand by the bin in Castle Square, taking the last swig before putting your bottle in the bin, issues you a £100 fixed penalty notice.

That’s what the Haverfordwest PSPO allows to take place.
As with the “Fire!” in a theatre analogy, Badger exaggerates for effect. But why is that any less plausible a scenario than any other.
It’s a waste of public money and scarce police manpower.
As Pembroke Dock county councillor Tony Wilcox asked: “Why do the Police need more powers than they already have?”

They don’t. The PSPO is an excuse, not a tool.
With rights come responsibilities.
Where necessary, those responsibilities are subject to legal enforcement.
However, potentially criminalising everyone with a new measure aimed at tackling a limited and declining problem is an attack on everyone’s right to enjoy ourselves quietly and make our own choices.

RSPCA branches across Wales have joined together to form a national food bank.