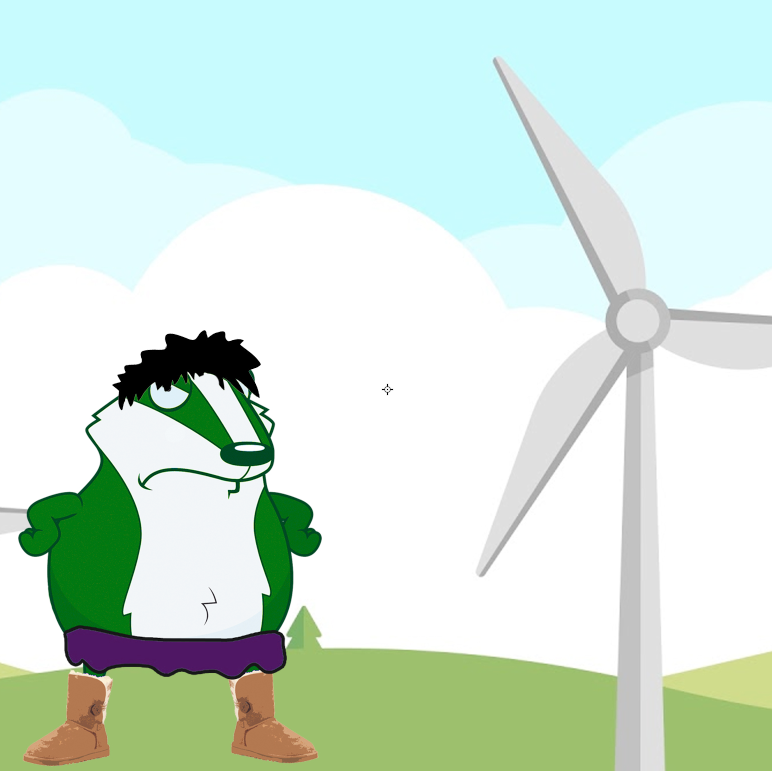 It’s the place to be for wind, readers.

So much of the stuff whistles around over our coasts and hills that Pembrokeshire is where governments and businesses (with big public handouts) want to come to harness the stuff energy production. And, where there’s renewable energy, there’s also a great deal of hot air.
Some oppose onshore wind turbines because they might reduce birds and bats to so much puree due to their placement and blades.

Others oppose offshore wind turbines because of the risk they perceive to the marine environment. A few fringe loons, carried away by their extensive use of Google and social media, think that win turbines threaten human health.

In short, a lot of people are in favour of renewable energy as long as it’s not generated anywhere near them.
Badger is old enough to remember when a proposal to burn Orimulsion (“the world’s dirtiest fuel”) at the old Pembroke Power Station caused an uproar. The CEGB warned the power station would close if they could not burn Orimulsion. The threat was discounted as scaremongering. After the refusal, the CEGB closed Pembroke Power Station.

However, mild hypocrisy is better than the Scottish Government’s outright lies. If you believe the SNP, Scotland could generate 25% of Europe’s wind energy. Now, readers, that claim is not only hot air but the sort of hot air that comes with a distinct smell of half-digested haggis. 25% is a lie, and the Scottish Government knows it’s a lie.

Some of those opposed to wind turbines also oppose solar farms. Again, they accept the principle of renewable energy’s role in providing for the UK’s future energy needs. Still, they’d rather not have the means of its production spoil their view. Some claim that nuclear is the answer, but nuclear mustn’t be built anywhere near them.

Badger regards a large part of the renewable energy industry as little more than a variation of the long con. It fails to account for the fact that energy demand is constant whether the wind blows or the sun shines. Where proven technology exists, it is inefficient. Research and development costs are so high that private companies seeking private profits rely on public funding to research and develop speculative technologies that – more often than not – deliver zippidy-doodah.

But nuclear is bad. It bears the stigma of Hiroshima and Chornobyl. Besides that, nuclear costs an absolute fortune to build, and the technology involved is unreliable. The UK cannot build its own nuclear plants, so we depend on the French and Chinese for their provision. And – if you look over the Channel – the French nuclear industry is in (ha! ha!) meltdown. Meanwhile, the sort of person willing to depend on China’s goodwill and good faith is patently unsuited to decide which socks to put on in the morning, let alone plan future energy policy.

That leaves those naughty fossil fuels. Mimsy Stroppe-Fortescue and her friends can moan all they like, but a trade-off exists between current domestic demand and a greener and cleaner future. And – regardless of how many people stick themselves to tube trains or roads – they’re what we’re stuck with until reliable renewable energy comes on stream in sufficient volume to support the UK.

Micro-generation offers a possible solution for smaller Welsh rural communities, some communities in Pembrokeshire and the rest of West Wales have already embraced it. Still, they are the minority because of the problems of scaling up provision and storage. Without storage, the energy generated is “lost”, and people will always rely on fossil fuels to fill the gap. As for that storage: the “batteries” required will be large, unsightly, chemically hazardous, and eat up a lot of so-called “carbon credits” in production.

The UK is not alone in facing problems with greening its energy infrastructure. In 2021, Germany produced 40.9% of its energy from renewable sources. However, the same sources accounted for only 16% of consumption.

The trade-off between coal and other fossil fuel sources is an increased reliance on gas in production and consumption. Germany produces only 16% of its energy via natural gas, although it accounts for 27% of consumption.

The road to “green” energy via nuclear also suggests significant inefficiencies. Germany generates 12% of its power via nuclear energy but consumes only 6% as part of its energy mix.

As a result, Germany relies on energy imports – especially natural gas – to keep the lights on and industry running.
The costs of switching Germany to green energy are unimaginably huge.

To reach the envisaged capacity of 200 gigawatts (GW) by the decade’s end, the German Government must add 15GW of solar PV capacity each year, almost three times the 5.8 GW added in 2021.

The 100GW onshore wind power target means that the number of wind turbines built each week must rise from 8 to about 30 modern turbines. Even then, a faster expansion of grid infrastructure would be equally necessary to achieve the transition.

The transition from fossil fuels will be expensive and problematic. It will also face massive planning obstacles. In the UK, the biggest NIMBYs are those who preach the virtues of conservation and green energy. It’s a variation on the theme of “Lord, cleanse me of sin, but not just yet.”

The right first step is to encourage energy efficiency in the UK’s homes and businesses and bankroll that investment. That means more spending funded by increased taxation and ensuring the right support gets to the least efficient homes and businesses. The costs will be high, and understanding that runs into one undeniable political truth: most people do not want to pay more for anything, let alone as we head into choppy economic waters. The big challenge for renewable energy is the electoral equivalent of persuading turkeys to vote for Christmas.

As Kermit the Frog once sang, it’s not easy being green.

Hello to a booby-trapped Austerity 2.0
It’s sink or swim for ‘Snowdonia’