Badger is in the dark 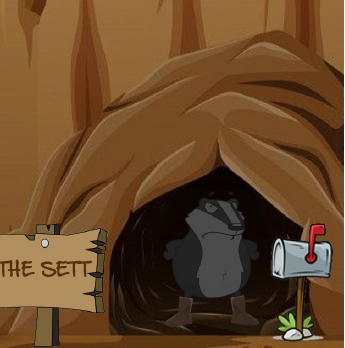 THERE’s never been a better time to be a badger.
Safe under the ground, we shelter from the heat of the midday sun in the cool and damp of our setts.

Eager to help save the planet, Mrs Badger even turned down the central heating on Sunday.
While you humans swelter up on the surface, Badger is sitting in his pants watching Bargain Hunt and repeats of the Professionals while Winston the Weasel fans his brow with a copy of Badger’s favourite satirical work: May 2021’s Plaid Cymru Manifesto.
It’s a hard life.

With his feet up, sipping a cool and zesty drink, Badger knows a few metres above everyone is panicking about whether they have enough baseball caps to cover their bodies.
The thought brings a smile to his fangs.

His fangs gleam and even pearlier white as he watches the Conservative leadership election unfold, or as he’s come to think of it: “A Party on the Edge of a Nervous Breakdown”.
Badger strongly suspects this contest is also satire.

The contestants are clumsy parodies, a collection of attack lines and stereotypes with barely any anchor to reality.

Liz Truss, for example. Take Liz Truss. She makes much of attending a state school and rather less of her very comfortable middle-class background as the daughter of a University Professor and a teacher. In 1994 she advocated abolishing the monarchy at the Liberal Democrat Party Conference and two years later joined the Conservatives.

She backed Remain in the Referendum campaign and now wants to tear up the UK’s commitments under international law to play to the most bonkers of Conservative Party MPs and non-domiciled or transatlantic newspaper proprietors.

Never mind her leadership campaign; her whole career appears based on the lyrics of the Tina Turner hit Private Dancer.

At the moment, in her effort to be what you want her to be, she’s channelling late-period Margaret Thatcher and coming over as Captain Mainwaring. Next month, it could be an unholy cross of Donald Trump and Donald Duck; it depends on what she’s told will go down well with Daily Mail readers.

Rishi Sunak is the bookie’s favourite. Bless him.

Dinky Rishi, who definitely doesn’t wear lifts in his shoes, is the housewife’s choice of billionaire. This man could give away £1m to every UK resident and still have a few hundred million left over.

Nobody from Winchester School has ever become PM. The nation must help underprivileged little rich boys break that cycle of deprivation.

In fairness, at least Rishi Sunak acknowledges that stuff must be paid for and that his rivals are talking out of their collective behind on promises of tax cuts.

Unfortunately, the teeny-tiny and ever-so thin-skinned former Chancellor’s ideas about tackling the UK’s economy consist of repeating what’s kept it tanking for the last dozen years.
Badger predicts one outcome with certainty: whoever wins, several political careers will end in its aftermath.

If Rishi Sunak wins, it’s hard to imagine Liz Truss being offered much more than the post of Her Majesty’s Minister Resident in the British Antarctic Territory. Or Secretary of State for Scotland, which amounts to the same thing.

As far as Badger can tell, the candidates for the leadership of the Conservative Party are not only barely on civil terms, but they are also barely members of the same political party.
The poison running through the parliamentary Conservative Party runs deep.

Whoever wins, Conservative MPs’ loyalties are so fractured and ideologically incompatible that binding up the wounds will take considerably more compromise and teamwork than any have so far shown.

The important thing to remember is that we do not elect a Prime Minister.
We elect MPs.

The Party with the most MPs, or the ability to form a coalition with others to create a majority in the House of Commons, forms a government.

The Prime Minister is usually – in recent times, always – the leader of the Party that forms a government.

That left Parliament in limbo.
Conservative MPs wouldn’t vote that they had no confidence in Mrs May, even though many did not.

She was left twisting in the wind for two and a half years until her enemies struck.
The fringe nutters in the Conservative Party were prepared to leave the country to go hang in pursuit of their narrow ideological ends.

A whole country and its government were held ransom by the likes of the feral Nadine Dorries and the odious Mark Francois.

No wonder they call Westminster “The Mother of all Parliaments”.
This week, the Conservatives voted they had confidence in a government led by a proven liar in whom they have no confidence.

Still, look on the bright side, while the Conservatives’ parliamentary Party tears each other to bits like rats in a sack, the best is yet to come.

The Conservative Party members, 200,000 of them, have the final say over who will lead their Party and become the next Prime Minister for two or three years until MPs decide they’ve had enough of them.

With the Conservative leadership election, 0.7% of the country decides who governs the other 99.3%.

It saves those ordinary people who can’t be arsed to put an ‘X’ in a box every four or five years from the boring task of not bothering to vote when given a chance.
As things stand, the last three PMs have not been chosen by an electorate but by a selectorate.

So far, we have learned nothing about what the candidates want to deliver to make our lives better; to address the UK’s immediate and chronic problems with inequality and deprivation; to do anything much at all, actually, other than to do whatever it takes to win the internal contest.

Like Badger in his sett, we are being kept in the dark while sheltering from the heat and humidity.

And if that’s how our democracy is supposed to work, it needs a massive overhaul.