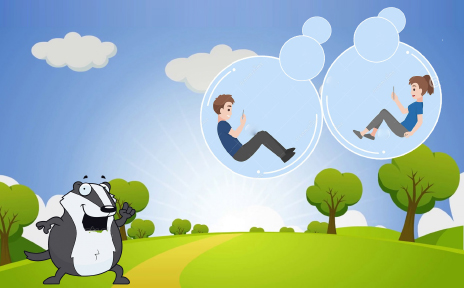 SOME people float through the world in a little bubble of their own, unaware of the consequences of their words and actions.

Extreme views held by different bubble people are equally harmful.
Think of democracy as like the human body.

It’s easy, readers: as the human body, everyone knows the arseholes are in charge.
Instead of bubbles, think of these spreading bubbles as cancer cells, metastasising like tumours and spreading loathing and hatred throughout communities’ bodies.
Like cancer, the bubble groups eat away at connective tissue, disrupt communities’ functions, and poison and sicken the whole.

Equally, extending our metaphor, neglecting the health of the body-politic weakens its immune system and encourages disease.

Even worse than the neglectful are people who deliberately infect democracy with poison.
They’re far worse than our bubble people.

They realise the potential consequences of their actions and press ahead anyway.
Rather like drug dealers, they know what they’re peddling is harmful but press on for personal gain – motivated by money and the pursuit of power for themselves.
There is ample evidence to support Badger’s metaphor.

In the United States of America, the Federal Government is split into three sections – the Executive (i.e., the President), the legislature (i.e., the two Houses of Congress), and the judicial (the Supreme Court).

In theory, the system works by checks and balances. For every function, there’s a brake.
The same system repeats throughout the USA in each state: Governor, Congress, and the Judiciary exercise the same powers in their states as the Federal Government in Washington DC.

However, social media has disrupted the system of checks and balances. Instead of connecting society, it took a hammer to it.

The aggressive use of social media by extremist cancers and feckless politicians acting as drug dealers for democracy has poisoned (and continues to poison) American politics.
Take abortion as an example: the guiding legal principle is a Supreme Court case called Roe-v-Wade, in which the Supreme Court ruled that banning abortions was unlawful and infringed women’s constitutional right to autonomy over their bodies.

In the USA, where each state has its legal system, some states adopt a rigid position on abortion by limiting the time in which a woman can legally request one.
Other states are more relaxed on the issue.

And that is fine: those are the rules of the American system.
In recent months, someone leaked a draft version of a Supreme Court decision which looks like the majority of the Supreme Court bench has decided to reverse Roe-v-Wade).
The leak’s result was an outcry by women’s groups and others.

All of this would be irrelevant to the UK – and to us – were it not for a story largely ignored in this country.

After the leak, someone took it into their head to travel across America to assassinate Supreme Court Justice Brett Kavanaugh.

It was not the dingbat idea of someone turning up claiming a tin of pilchards was a hand grenade. The assassin went well-equipped and well-armed to accomplish his goal.
The motive was political.

Justice Kavanaugh is a noted right-winger on the Bench. If he – or any other of the current right of centre justices were to cark it – Joe Biden would nominate his replacement. The replacement would likely be a more moderate candidate in favour of upholding Roe-v-Wade.
The would-be assassin was nabbed after – realising the monstrosity he planned to carry out and seized with mental distress– he phoned the Police.

Social media had radicalised him. Violent language from others who shared his bubble and opportunist politicians trying to spin gold from the leaked decision’s fleece pushed an individual (possibly already damaged by exposure to online poison) towards his lethal mission.

In the UK, we look on smugly at such events: mass shootings in schools, bloody riots between those seeking the legal right for a woman to abort an unborn child, and social media abuse by an overmighty executive could not happen here.

Except the last of those have.
The lawyers who represent those challenging the Government’s policies on deporting asylum seekers to Rwanda or taking the Government to the High Court to test the lawfulness of the UK Government’s actions are derided by the Home Secretary, the Prime Minister, the Justice Secretary (that’s a laugh) and any other numbers of Government stooges in the press and broadcast media.

Anyone holding the Government to account is automatically “a leftie”, who plays the system for profit, and without regard for Boris Johnson’s 80-seat majority and “the will of the people”.

The fury of the Government, its backers in the UK’s foreign-owned print and online media, and the mob poisoned by their words is turned on those who have a simple job: representing their client’s wishes and testing whether the Government’s Acts and actions are lawful.
That is the proper function of the law and the judiciary.

The bubble mob know no better.
The politicians do, and so do their cheerleaders in the media.
Those last two groups are like heroin dealers. They sell poison and misery in the full knowledge what they say is not only untrue but likely to incite violent reactions and actual violence.

Consider what happened in Penally, readers.
Louts, thugs, and politicians poured into the small village and poisoned Pembrokeshire’s politics.

In doing so, they ignored the plight of the victims of war to sell lies like dealers selling heroin.
And they found willing buyers for their tainted wares among those conditioned by online media to react to their malicious opportunism and venom.

They caused a violent reaction, actual violence, and they meant to do so.
It is a tragedy that those hooked on the narcotics of hate by their actions continue to exhibit all the worst traits of addiction.

Badger doesn’t have an answer to the problem because there isn’t one. He can suggest a possible first step in its treatment: politicians need to follow this simple dictum: shut up and stop trying to make bad situations worse.

For some politicians – hello, Priti Patel and Boris Johnson – the cure will be worse than the disease.
Nobody pretends curing cancer is easy but to stop dealing in political heroin is a matter of choice

Badger is in the dark

Badger and The Game of Thrones

Badger and the age of despair and miracles