Home » Badger and a question of values 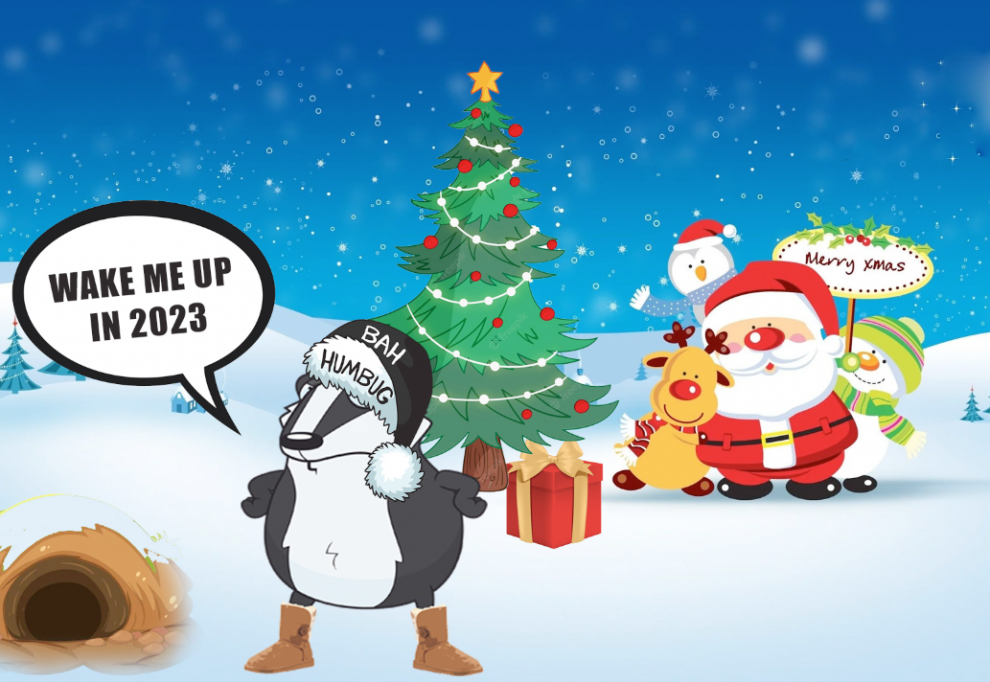 BADGER is a mammal who finds Christmas a bit of a grind.

There’s far too much fun, “festive fayre”, and forced frivolity.

The ground is rock-hard; when it isn’t rock-hard, it’s mud. It’s the middle of cowing winter, for goodness’ sake. That’s no fun for us who rely on snuffling around hedgerows looking for things to dig up and devour. You spend half the night digging into a promising-looking grassy mound near Rosebush hunting for unwary bunnies, only to discover some mouldy old bones draped in rusty armour, a pile of gold, silver, and jewels, and a giant sword marked “Excalibur”.

What good is that to anyone?

It’s called “the bleak midwinter” for a reason, readers. And that’s before Jamie Adams and his philistine few put on their mock sad faces and try to eliminate music in schools and Sports Pembrokeshire to save impoverished councillors a few quid on their Council Tax. It’s not that Badger approves of young people. Generally, he considers that no good comes from them. However, snapping off their opportunities to keep the middle classes in tinned pilchards and saloon cars strikes Badger as a tad unjust.

The world is, however, unfair. And Badger supposes that’s an important lesson for the young to learn. When teaching Pembrokeshire’s youth about unfairness, there’s nobody better than the comfortably off and past it to educate them. Inequity is a proud British tradition that some Pembrokeshire councillors celebrate with relish.

Badger recalls councillors waxing lyrical about the old main hall at Tommy Pic before its demolition and replacement by Haverfordwest High School’s new performance space. He can’t help wondering how many of the same councillors will turn their face against the Council’s provision of the Schools Music Service to shave pennies per head off Council Tax.

Music gives the soul to the universe, wings to the mind, and life to everything.

Most children will have their first experience of music at school. Music education of high quality must be available to as many of them as possible: it must not become the preserve of those children whose families can afford to pay for music tuition.

While music touches the lives of all young people, the disadvantaged can benefit most. Music helps bind pupils into the wider life of the school. But it also does more than give little Cerys a chance to toot on the descant recorder or young Luke the opportunity to bow a cello.
Besides the social benefits of learning music, working as a team while honing individual skills and building confidence, music is the gateway to other important learning patterns. Music develops language skills; the discipline of music helps with mathematics; pattern recognition helps with the sciences.

After a fortnight of intense research interspersed with random music playing, Albert Einstein emerged with the first working draft of his paper on general relativity.

He later said, “If … I were not a physicist I would probably be a musician. I often think in music. I live my daydreams in music. I see my life in terms of music.”

Music is more enjoyable if you have the tools to engage with it actively. Instead of being a passive receiver of music, the active listener can find enjoyment by getting more out of the art and craft underpinning songs and symphonies. The glacial beauty of Bach’s symmetries and structures is well-known. Whether you listen to Stormzy, Taylor Swift, or the Foo Fighters, the same forms and shapes Bach moulded in The Well-Tempered Clavier over 300 years ago appear. Even if you can’t carry a tune in a bucket or solve quadratic equations, learning to listen to music provides the learner with tangible benefits for future life.

Finally, music is a language connecting the whole of humanity. Throughout history, every human society has created music. Creating music, whether humming random notes while sitting at a screen and typing an article, composing the Fantasia on a Theme by Thomas Tallis, or working in a chain gang, binds us together.

The chance for ALL young people in Pembrokeshire to get an education in music, become proficient in it and realise their potential is worth preserving.

For those of you more interested in cost than value – or values, for that matter – the Schools Music Service costs every Pembrokeshire household pennies each week. For those who know the price of everything and the importance of nothing, that’s worth considering when proposing cuts as though they exist in a vacuum.

Every cut affects lives and livelihoods, not only in the present but also in the future.
It’s fair for those who want to axe services the Council isn’t obliged to supply to ask where cuts could come from.
Were Badger forced to give an answer, he’d start with a full review of the Council’s staffing requirements. As they’re engaged at public expense, either all staff are essential or none are. The public can’t afford silo working or empire building. Where there is duplication, it must go. Natural wastage – staff departures during the year – should combine with training more agile and multi-skilled staff. It might (possibly) avoid the need for compulsory redundancies.

All funding arrangements with external bodies – Service Level Agreements – must be reviewed and duplication eliminated within them. You don’t need three or four third-sector bodies to deliver similar services. Moreover, the Council shouldn’t offshore control of that funding to any third-sector body.

For the medium term, Badger would take a long and hard look at whether the Council needs to deliver statutory services on its own or whether it could partner with Carmarthenshire or Ceredigion councils to provide them.

Badger’s already criticised those who know the cost of everything and the value of nothing. To that criticism, he would add a further one of the Welsh Government. The Welsh Government knows the cost of the square root of bugger all and even less about value for money.
Councils must be free to spend money on local priorities, not the ones that sound good to Welsh Ministers who’ve forgotten what local democracy means.

Merry Christmas, Meghan
Until we co-operate with the EU, the little boats will keep coming