Home » Badger and the Doomsday Cult 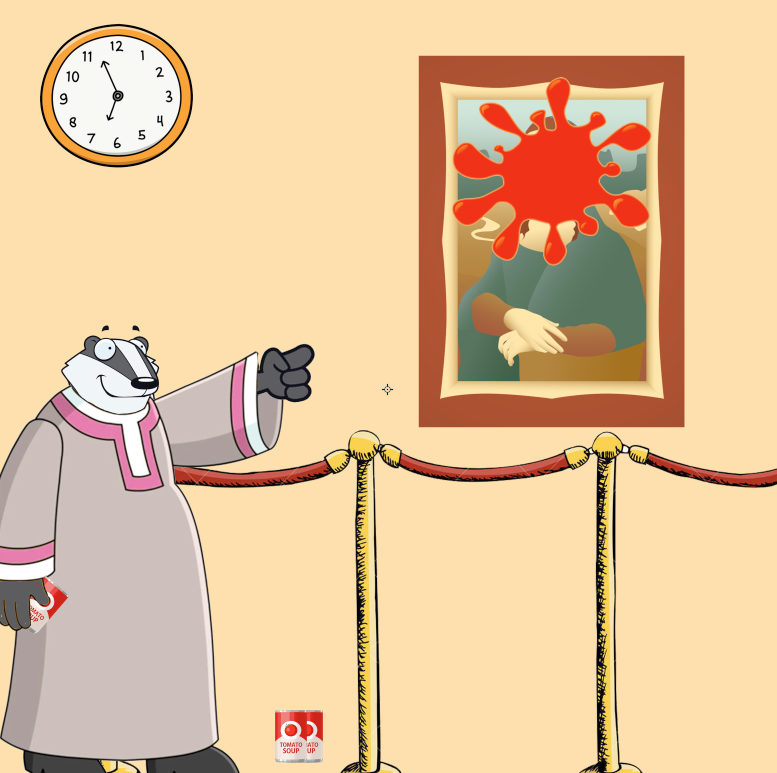 OF all the ways humankind could tackle climate change, it never occurred to Badger that pouring Heinz Tomato soup over a painting would help save the planet.

Mind you, neither did Badger factor in glueing oneself to a busy road nor throwing a bucket of human excrement over a statue of Captain Sir Tom Moore to his assessment of how humanity might try to avert the end of times. However, to a few – a special few – funded by a billionairess recovering addict whose family fortune comes from oil – those are reasonable steps to take.

Those taking part in such protests consider their civil disobedience campaign an admirable exercise to force politicians to stop using oil and oil-derived materials. Only by “just stopping oil” can we all be saved.

Badger doesn’t know whether to admire their commitment to their cause or hoot with laughter. After carefully considering the options, hooting with laughter is the right way.

Badger enjoyed listening to one of their number on breakfast telly last week. The person being interviewed was a GP, which only goes to show that qualifying as a doctor bestows neither wisdom nor intelligence. Badger considers the issue this way: you could go to your GP to treat piles or a nasty dicky tummy, but you wouldn’t ask one to tackle a global existential crisis while they were about it. Their insight is no more valuable than yours or Badger’s on that score.

Dr Patrick Hart said he and his fellow activists considered the government criminal and the protestors’ actions proportionate and essential to address its criminality. It’s the sort of special reading of the law that comes from looking in a magic hat after one too many magic mushrooms.

The justification from “Just Stop Oil’s” website explains: “Allowing the extraction of new oil and gas resources in the UK is an obscene and genocidal policy that will kill our children and condemn humanity to oblivion. It just has to stop.”

“Just Stop Oil” puts an alarming case. It claims: “In eight years, we need to end our reliance on fossil fuels completely. The transition will require massive investment in clean technology, renewables and energy storage, but it cannot be done at current levels of energy consumption. We need to cut energy demand by insulating Britain and rethinking how we travel, including providing free public transport everywhere.”

The UK is dependent on fossil fuels. The technology to harness renewables is experimental. The UK generates more energy from renewable sources than most European countries; however, production is not consumption. We can’t store what we generate, and renewable energy depends on conditions beyond our control. When there is excess, we sell what we produce; when there is a shortage, we buy.

In the meantime, and until renewable technology is ready, we need fossil fuels to heat our homes and power our industries. Demand is constant, not on and off. Who will pay for us to survive while we wait for technology to catch up with demand?
Badger has an idea.

Aileen Getty, who bankrolls “Just Stop Oil”, is worth around £3.5bn. She could give £1m to every UK household to stick up solar panels and wind turbines, buy electric cars and heat pumps, and properly insulate homes. It would barely dent her fortune, but it’s cheaper to pay protestors to glue themselves to roads and make nuisances of themselves in the cause of pointless tokenism.

On the other hand, bearing in mind the Gettys made their fortune through oil, it could all be a cunning black op. You get a few unsuspecting do-gooders with an exaggerated sense of injustice and their importance. They behave in such a bizarre and irritating way that you end up undermining renewable energy’s worthwhile cause. More oil and other fossil fuel profits all around!

To double down on that deal, you encourage the dingbats to insult members of the public who are not switched on to their vision of a future. As “Just Stop Oil puts it, if you don’t participate in their behaviour, if you are not a member of what they call the “resistance”, “you are appeasing evil… you are betraying 200 years of struggle.”

That’s the well-padded struggle of two hundred years of moneyed utopian idealists who never struggled for a damned thing for their whole, well-padded lives telling the lower classes what to think. Their “struggle” is based more on Thoreau than on anger.

A change in the climate is happening and has accelerated throughout Badger’s lifetime. Humanity has – beyond any reasonable scientific doubt – contributed to climate change. However, glueing yourself to the road or throwing paint at art will persuade only the gullible and already dysfunctional your cause has merit.

Weaning people off fossil fuel is more complex than turning off its flow. Governments have acted, continue to act, and will act to reduce climate change’s impacts. Whether they are acting fast enough is a political issue and needs a political solution that is economically feasible and acceptable to voters. “Just Stop Oil’s” antics show they do not have a political solution, only an empty pose in place of one.
Dig below the surface, and the group’s ideals are the same as William Godwin’s in the 18th and early 19th centuries: a social utopia in which society reaches a level of sustainability and engages in “voluntary communism”.

The idea that humans are rational beings who will make rational decisions for the common good as part of the inevitable progress of social evolution was nonsense 200 years ago and is 200 years old bunkum now.

People are not rational; they do not make considered logical and unselfish choices. Human beings live in the present. Their plans for the future are seldom more than hoping their lives – and those of their families – improve through a combination of their acts and good fortune.

A smaller number of people want to improve the lives of their communities. A few people have a grander vision of improving the lives of people they’ve never met or with whom they have little or no direct connection.

Finally, a tiny minority become convinced that their vision of the ideal is the only right one. They become fanatics, fantasists, and cultists. And what a bunch of cults we have at the moment, readers! From “Just Stop Oil” to militant vegans pouring milk on the floor in Waitrose stores to neo-Nazis picketing asylum seekers and the 57 varieties of asshats wanting to turn back time to 57 varieties of non-existent golden ages.

Cults to the left of him, cults to the right of him. It brings to Badger’s mind the periodic trend for apocalyptic fiction and millenarianism predicting, with varying degrees of relish, cataclysms to sweep away civilisation. It also reminds Badger of one salient fact. Throughout history, prophets of the end share a common characteristic. They want the end to come so they can spend their last few moments before the Four Horsemen appear nodding smugly and saying, “told you so” to whoever’s left to listen.