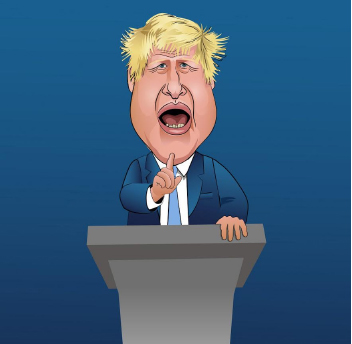 Even with the most beloved family pets, there comes the awful time when you have to schedule a final trip to the vet. That time came yesterday for Big Dog: once the Tory Party’s bouncy, panting mascot for everything that’s best about Brexit Britain; more recently wobbling and snarling around Downing St like Old Yeller with the hydrophoby.

Some of Big Dog’s handlers, it’s true, expressed concerns from the start. They weren’t sure about his temperament. Usually a fluffy, friendly thing, Big Dog occasionally came out with a nasty growl and a flash of teeth when you came too close to his toys. You wouldn’t altogether trust him around kids. And he went and rolled in shit every time he got the chance.

It was somehow inevitable that Boris Johnson’s cod-Churchillian premiership wouldn’t collapse under any great clash of policy or principle. Whether by judgement or luck, Boris often got policy right where it mattered (and particularly where it aligned with the best interests of one Alexander Boris de Pfeffel Johnson). But his own temperamental flaws and unsuitability for high office were always going to bring him down in the end.

Even so, the level of comedic Big Dog bathos around Boris’s departure was a surprise. It didn’t come about through economic meltdown and people feeling the pinch, but from the Pinch feeling people.

Few outside Parliament had ever heard of Chris Pincher. Insiders had heard a fair bit; not all of it complimentary and much of it related to drunken gropings. Boris knew: he’d been briefed about (one of) Pincher’s indiscretions by the civil service. ‘Pincher by name, pincher by nature’, he joked at the time to Dom Cummings.

Last Wednesday, the chain of events that culminated in Big Dog’s downfall began. Partaking too freely of the Conservative Friends of Cyprus’ hospitality, a pissed-up Pincher launched himself at two attractive but apparently unconsenting Tory boys. This was too louche even for the Carlton Club, and the Pinch met the pavement outside.

Embarrassing and potentially career-ending stuff, but Pincher had what it took to succeed in post-2016 politics: loyalty to Boris Johnson. Nearly as keen a Brexiter as he is a boozer, he flew to Boris’s rescue in January by co-ordinating ‘Operation Save Big Dog’, whereupon Big Dog was indeed for the time saved. Returning the favour, Boris circled the wagons. Pincher apologised and stood down from the whips’ office, and the PM declared the matter closed.

Even at the time, this didn’t look like a smart move. The Conservative party has had a gamey, mid-nineties whiff of moral and electoral decomposition about it for a while now, and public enthusiasm for Tory sleaze is very low. Pincher should have been suspended immediately and subjected to proper disciplinary proceedings. Conservative MPs –a number of whom had themselves previously been Pinched– reacted with outrage.

As usual, it wasn’t the original misjudgement that proved damaging, so much as the attempts to cover it up. Boris swore blind that, when appointing Pincher as Deputy Chief Whip, he had no reason whatsoever to think the Pinch was a pest. He sent Government ministers out all over the airwaves to declare their absolute confidence that Big Dog had seen and heard no evil that would make him question Pincher’s integrity. Then came nemesis: No, Prime Minister, said Sir Simon McDonald (the Foreign Office Mandarin who had briefed Boris about Pincher). We told you all about it, in person, and you are a liar.

Although the dogs in the street know Big Dog is a liar, hearing it said so directly by someone like Sir Simon was the tipping point for the Cabinet. Just after 6pm on Tuesday, Sajid Javid and Rishi Sunak submitted rapier letters of resignation.

Boris was sure he could handle the situation. Nadhim Zahawi is a safe pair of hands to appoint as Chancellor, and when interviewed on Radio 4’s Today programme on Wednesday morning, Zahawi repeated, perhaps twenty-seven times, that Boris needed to stay in power to deliver his election pledges, and to handle ‘a war raging on our continent’.
Mate, you’ve got a war raging in your office. While Zahawi was on the air, yet more and more of his colleagues walked out.

That was when Big Dog went full Cujo. The men in grey suits went in, then scrambled out bitten and bruised with their grey suits in tatters. Big Dog snarled and lunged in a corner of the Cabinet room, only letting Nadine anywhere near him. Wednesday’s news announced more ministerial resignations that day than had been endured by any PM in British history (that was the Six O’Clock news. By the News at Ten, he’d lost half a dozen more, and Simon Hart quit to round the evening off).

Whatever fitful and tormented sleep the PM had on Wednesday night was broken by the uncomfortable news that even the scabs he appointed the previous day –Zahawi and freshly-minted Education Secretary Michelle Donelan– were resigning and declaring no confidence in him too. By quarter past nine, it was finished. Big Dog rolled over and gave up the ghost.
The pantomime of Boris Johnson’s departure vindicates what his critics said all along: the only thing that ever mattered to Boris is Boris. The shambolic chaos around his resignation is entirely the fault of the party that knew his flaws and made him leader anyway.

Boris’s tenure as Prime Minister wasn’t just disgraceful on account of his personal conduct. The immense Parliamentary majority he won has been squandered. His pursuit of Brexit at any cost soured our relationship with our neighbours and cost the economy dearly.
We remain subject to all the ‘foreign laws’ we had before, which are now beautiful British laws. Men with clipboards stand at every UK border, including the new border in the Irish sea. The tax burden hasn’t been higher since 1948, but there’s no new Jerusalem to show for it. The dog it was that died, but part of our international reputation died too.

Badger and the Kingdom of Heaven