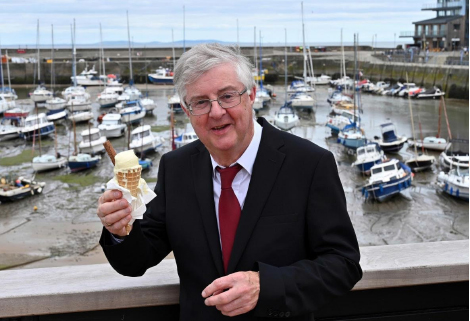 If Mark Drakeford and his cabinet go down to Dan yr Ogof today, they’re in for a big surprise. Appalled at the Welsh Government’s ‘anti-tourism and anti-English policies’, the National Showcaves Centre for Wales’ chairman, Ashford Price, has banned the lot of them from his caves: ‘Members of the Welsh Government’ a sign at the entrance warns, ‘are no longer welcome at this attraction.’

Price later clarified that he wasn’t shutting out the whole Welsh Government, only the Welsh Ministers. This is just as well for visitor numbers because excluding every part of the apparatus of government in Wales would mean banning nearly everyone here who still has a job, except the ones who work for the council or the NHS.

Even if he does mean just the Welsh Ministers, it’s hard to see how the ban can be implemented. No ordinary man or woman in Wales can identify more than one or two Welsh Ministers, and the most sophisticated Chinese facial recognition tech would struggle to pick out Jane Hutt or Julie James. Unless Ashford Price recruits a professor of Welsh politics to man the ticket booth, Welsh Ministers are going to slip in unnoticed.

Anyway, it’s a futile gesture. As all rural Wales knows, the buggers hardly ever leave Cardiff Bay. And why go? Mark Drakeford doesn’t need to travel to Dan yr Ogof to find himself surrounded by dinosaurs, and seeing a gigantic, bottomless hole in the ground would only put him uncomfortably in mind of the Betsi Cadwalladr health board.

Whether or not it will have any effect on policy, Price is quite right to tell Mark Drakeford to take his crumpled suit, wonky specs and useless, incompetent Ministers elsewhere. This Welsh Government is proving a disaster for tourism.

You might have thought the overflowing hotels, campsites, restaurants and pubs of Wales’ 2021 staycation summer were a glorious encouragement to the Welsh Government to help the hospitality industry let rip, and welcome back hundreds of thousands of those first-time visitors to holiday again in Wales, year after year.

Unfortunately not. The image of the pandemic that stuck in Welsh Labour’s mind was one from the year before: a scrawled sign bearing the legend ‘GO HOME RATS’. So instead of making life as easy as possible for Welsh tourism, Drakeford announced a tourist tax, a 300% increase in council tax for ‘second homes’, and the unfulfillable requirement that holiday lets actually be let for 182 days of the year, when Wales typically has 4 annual days of sunshine.
What’s he up to? Politicking, and trying to outmanoeuvre Plaid Cymru, that’s what. Welsh Labour might be rotten at running the country, but they persistently outsmart everyone else at the ballot box. They learned lessons from the collapse of Labour in Scotland, and are determined that the valleys won’t go the way of the glens.

In Scotland, Nicola Sturgeon demonstrated that devolution makes itself relevant by creating a permanent state of tension with Westminster (a permanent state of Conservative government at San Steffan making this task all the easier). Drakeford likewise has sussed that the formula for electoral success in Wales is doing things differently from England (even where ‘differently’ means ‘worse’), whipping up resentment against the English, and getting England to pay for it.

The strategy proved its worth through the pandemic. Every fool English regulation was trumped by an idiot Welsh equivalent. Every time one of the laws was relaxed, Drakeford howled that it was too much too soon, then did exactly the same thing a fortnight later. And the Welsh people, particularly those inclined towards separatism, loved it. Now there’s a shortage of irrational Covid hysteria to exploit, so irrational hostility towards ‘second home’ owners and the tourist industry will have to do.

Labour’s objective is to capture nationalist sentiment, tame it, neuter it, and make Plaid Cymru redundant. In the post-Covid afterglow, Labour has saddled Yes Cymru as its own beast and is trotting this Trojan horse around the Fro. Drakeford has nobbled nationalist opposition in the Senedd by pandering to Adam Price’s colossal vanity. What is astonishing is that Plaid are playing happily along with all this, failing somehow to spot the Faustian nature of the bargain.

The war on tourism is the only thing Plaid Cymru have got out of their de facto coalition with Labour. If they think it will do them much good, they are kidding themselves. In return, they are letting Mark Drakeford vampirise their support, and haemorrhaging credibility by failing to stand up for constituents against Labour’s anti-rural and anti-business policies. If Labour get their way, there will be nothing left in Plaid constituencies but conifers.

Labour, too, may be misjudging their gambit. Nationalism acquires an evil life of its own quite independent of parties that foment it, whether for reasons of principle or cheap expediency. Stirring up resentment against England and scapegoating the English is, if anything, worse when done hypocritically by a unionist party than when done with childish sincerity by the Nats.

Mark Drakeford might find that his opportunistic attacks on tourism turn around and bite him. If he stokes the same cauldrons of hatred and resentment in Wales that have been allowed to bubble along since 2014 in Scotland, the First Minister will rue being banned from the Dan yr Ogof caves, when it would be convenient to have somewhere deep and dark to hide.

Badger and the numbers game

Badger has a busman’s holiday