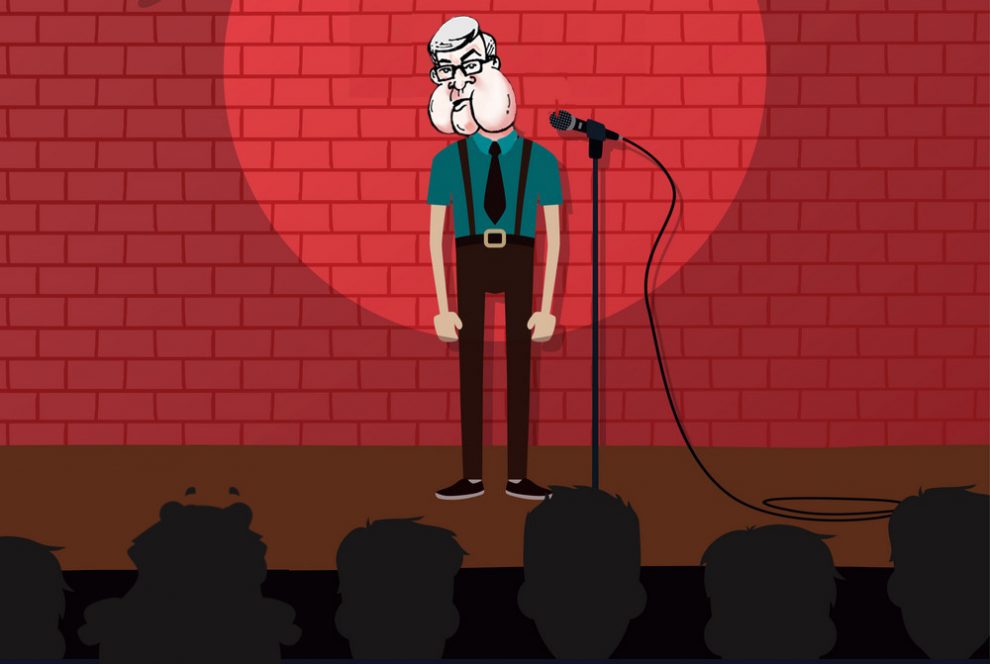 MARK DRAKEFORD has a sense of humour.

That might surprise those readers who listen to his prepared speeches or carefully curated interviews on Wales’s broadcast media. Suppose you relied upon those as a guide. In that case, you’d form the impression that he’s a droning, grey technocrat who resents scrutiny and gets very narked when anything resembling it comes his way.

However, during a press conference this week, the First Minister revealed he is a gifted stand-up comedian. When he steps down sometime next year, he plans to gig around Wales, sharing his deadpan stylings and his hilarious routine that there is no “perpetual crisis” in the Welsh NHS. Asked whether he was “embarrassed” by the state of the Welsh NHS, Mr Drakeford ducked the question. He provided an interesting take that, when it came to the Welsh NHS, boiled down to “never mind the quality, feel the width”.

With material like that, he’ll have satire fans rolling in the aisles.
It all reminded Badger of Hilaire Belloc’s Matilda:
Matilda told such Dreadful Lies,
It made one Gasp and Stretch one’s Eyes;
Her Aunt, who, from her Earliest Youth,
Had kept a Strict Regard for Truth,
Attempted to Believe Matilda:
The effort very nearly killed her.
Nobody would accuse Mr Drakeford of telling a direct lie. He’s not clever enough to dissemble so much for so long on one topic.

The truth is shocking: he really believes there is no perpetual crisis in the Welsh NHS. He believes that with every fibre of his being.

The Welsh Government and its First Minister are gripped by a collective delusion that, after twenty-odd years of responsibility for Welsh health services, “crisis” is the wrong word to describe the NHS’s condition.

Badger has devised an alternative to the word “crisis”: “ocean-going disaster”.
Let’s consider one of the larger porkies the First Minister uttered.

Either the Welsh Government’s data model is wrong, or its claimed efforts to tackle those pressures in advance are no more than gathering in Ty Hywel to strike up a rousing chorus of Abide With Me as the NHS ploughs into the iceberg.

And on the subject of predictability, who could’ve predicted that slashing the number of inpatient beds in Wales while underinvesting in post-hospital social care would lead to chronic bed shortages and bed-blocking by those medically fit for discharge who don’t have safe care packages in place?

As for increased demand for medical care, no right-thinking person could’ve looked at the rapidly ageing profile of Wales’s population and thought: “Hmm, this will lead to a predictable rise in demand for both health and social care as people live longer in poorer health.” That’s crazy talk! Madness, Badger tells you. The very thought of such a scenario is madness.

Let’s consider other unpredictable issues. For decades, the NHS has failed to recruit enough clinical specialists, GPs, nurses, radiologists, and physiotherapists. Nobody could’ve predicted that a shrinking pool of qualified staff at a time of increased demand for services could ever lead to too many patients chasing too few appointments. Nobody could’ve foreseen staff shortages would lead to longer waiting times for treatment. Indeed, readers, the notion that longer waiting times would worsen patients’ conditions and increase their treatment costs is nonsense. That could not be predicted by anyone, let alone a Government responsible for delivering public healthcare.
In addition, with fewer qualified staff members meeting higher and higher demand for services, nobody could have predicted that burnout would be a problem. Good grief, readers; the idea is so ridiculous as to be laughable.

Equally hilarious is the idea that pissed-off nurses, sick and tired of overworking, would vote with their feet and work for agencies that pay them more and allow them to work as and when they want. Good Lord, readers! Who’d have thunk it?

And that leads to an even more unlikely and unpredictable state of affairs. When demand for hospital services is highest, patients are told to see their GPs. What bloody GPs? Have you tried getting a face-to-face appointment with one recently? Have you tried ringing a surgery lately? Shifting initial demand to an area of gross undersupply leads to frustration and increasing hospital attendance as concerned patients seek the treatment they cannot access elsewhere. Badger emphasises, again, that outcome is completely unpredictable.

The 111 telephone service is backed up to hell and back. One-third of all callers abandon the wait for an answer. Guess where they go, readers. Yes! It’s back to the hospital. The call handlers are not clinically trained specialists. If you cannot access a GP – or locate a dispensing pharmacy (and guess where they are in Pembrokeshire) – call handlers will refer you to … the hospital.

Nobody could have predicted fewer resources with rising demand could lead to whatever is not a perpetual crisis but is identical to one. Certainly, a former health policy advisor to Rhodri Morgan, who became Health Minister and then First Minister, could never have foreseen the effects of restricted supply and increasing demand.

Joining Mark Drakeford on the comedy circuit will be Adam Price, the master of ineffectual outrage. Mr Price wiggled his impressive eyebrows and pronounced any increase in the NHS’s use of private healthcare facilities to ease pressures on the public sector was “privatisation by the back door”. If that’s what Mr Price thinks, he is even less reality-adjacent than his Senedd colleagues believe.

Badger will be generous. He’s a tall man, that Adam Price. At his height, lack of oxygen to the brain must be a problem.

The First Welsh Assembly convened in 1999. If the Welsh Government did not foresee the NHS’s problems, or if it did anticipate them and was powerless to prevent them, that’s decades wasted fiddling around the edges.

Come to think of it, readers, the key to good comedy is that it’s grounded in reality, which comedians twist into comedic shapes.
Badger’s never imagined Mark Drakeford as the next Noel Fielding. Still, the First Minister’s future comedy career relies on a more surreal take on reality than Noel Fielding’s.

Suspend disbelief? You’d have to hang it from the yardarm.

End the political pantomime over Scotland’s Gender Recognition Bill
No return to Covid restrictions. Ever.