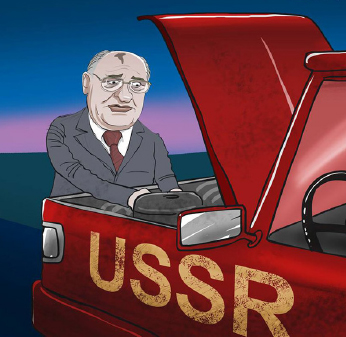 Long after the statues of Marx and Lenin were toppled across Europe, the last of the troika that ended communism –Ronald Reagan, Margaret Thatcher and Mikhail Gorbachev– fell too.
Gorbachev’s role in bringing the Soviet Union down was pivotal, but entirely unintentional. He believed in communism. Right until the USSR fell apart, he insisted communism was a good system, problematic only in its execution. The police state and prison camps, the pogroms and famines, border walls and barbed wire were aberrations, not a function of communism.

On his appointment as General Secretary of the Communist Party, Gorbachev denounced the economic stagnation of the Brezhnev years, and described solutions. He didn’t set out to dismantle the Evil Empire, but sought instead to address the eviler bits.

Perestroika (reconstruction) relaxed state control of the economy and introduced some free-market reforms. Glasnost (openness) sought to make government accountable, and to restore a degree of individual liberty. Gorbachev tried to create a better and more durable socialism, and a socialist state unsullied by the brutal excesses of Stalinism. He thought that by tweaking the economy and giving people a taste of liberty, the Soviet Union could be saved.

He was wrong. Everyone was fed up to the back teeth with the system. Taking down the razor wire and expecting people to stay put was like expecting the air to stay in a burst balloon. Once the murderous apparatus of the police state stepped back, people surged over walls and across borders. Communism and freedom are fundamentally incompatible, and it is hard to make much of a case for a Utopia which everyone who can, flees.

Once the restraints of state repression were loosened, nationalisms within the Soviet empire were as irrepressible as individuals’ desire for autonomy. One by one, Eastern Bloc states dropped out of Moscow’s orbit. On 1 December 1991, 90% of Ukrainians voted in a referendum to secede from the Soviet Union. With Ukraine out, the empire Bolshevism built effectively ceased to exist. Within the month, both Gorbachev and the Soviet Union were gone.

On Christmas Day, he left office. The hammer and sickle flying above the Kremlin was lowered for the last time, replaced by the flag of Russia. The democratic world cheered, and President Bush declared the cold war over. Some commentators thought history itself was over, too: that with the elimination of its ideological counterweight, progress towards universal liberal democracy was more or less inevitable.

History stubbornly kept going. Three decades of it find us in a different and less optimistic world than the one where winds of change blowing through Gorbachev’s USSR brushed Europe’s cheek. It is a colder wind now scudding from Russia, promising a bitter winter for the west (except America, which a decade ago had the good sense to frack its way to energy security).

Russia avoided liberal democracy altogether. Communism gave way to simple chaos under Yeltsin. Putin came to office on the promise of restoring order, and did so without reference to the rule of law. Under Putin, Russia has become a fascist state.

Neither did the fall of the Soviet Union mean that the red flags came down everywhere else. China’s gerontocrats studied what they saw as Gorbachev’s mistakes, and were determined not to repeat them. Instead of Perestroika’s attempts to tinker with a faulty economic system, China reformed its economy from the bottom up, creating a market autocracy and absolutely cracking the tyrants’ old problem of having, at the same time, free-ish markets and decidedly unfree people.

Glasnost was a warning to dictators everywhere that if you give people an inch they’ll take an ell, so from the tanks that literally crushed dissent in Tiananmen Square onwards, China doubled down on anti-Glasnost. Nationalist and religious sentiment both threaten a centralised empire, and to maintain its grip China Sinicized Tibet, neutered its Christian church, suppressed cults like Falun Gong, and is committing near-genocide against its Muslims. It runs the world’s most accomplished surveillance state.

Gorbachev became a hero to the west, but was viewed with ambivalence inside Russia. There was little appetite for his post-Soviet brand of social democracy, and repeated attempts to re-establish himself in political life got nowhere. A good man in a gangster state, he simply wasn’t cut out for what Russian politics had become in the age of the oligarchs. It didn’t help that he sometimes cheapened his own image, seeming sometimes a little too pleased with his celebrity status.

Vladimir Putin (who has declined to lay on a state funeral) regularly spat that Gorbachev ‘romanticised’ the west. And as Putin tried to seize Ukraine’s independence back by force, the collapse of the Soviet Union –precipitated by its departure– returned to haunt Mikhail Gorbachev at the hour of his death.

Gorbachev outlived Russia’s brief moment of liberty, and Communism has outlived him, but his legacy should not be underestimated. Most of the former Warsaw pact countries are flourishing –or at least functioning– democracies; many in the European Union or under the protection of NATO. Elsewhere, descent towards a world of tyrants and theocracies is no more inevitable than the last ‘end of history’.

Ukraine is fighting hard to retake its territory. The UN has finally had the guts to tell China that it is committing crimes against humanity. Leaders with Mikhail Gorbachev’s integrity and courage are notably absent right now, but his example will always give us hope.