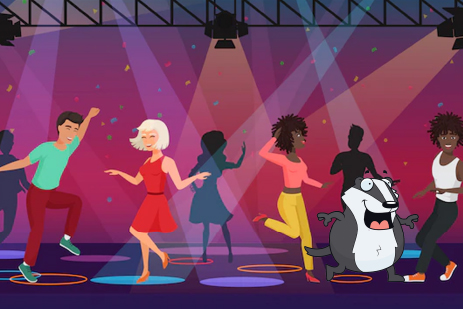 Your furry pal Badger is in a surprisingly good mood this week.
He feels upbeat. Almost – what’s the word? – cheerful.
Why is Badger in a good mood?

Because whatever happens, Boris Johnson will still be Prime Minister for a while longer.
That is excellent news for our nation, especially those daredevils who like to live on the edge.
It’s a free licence to engage in consequence-free drunken revels at all times, in all manner of places, and your places of work.

For example, if you work at County Hall, what’s the harm of cheeky lock-in with karaoke, wine, and pizza. You could be there, two in the morning, wild-eyed and blitzed off your tits, and it would all be okay.

After all, if it was okay for the staff at Number Ten and the Prime Minister to behave like that during the lockdowns, our freedoms must be even greater now there are no restrictions.
Drinkies in the workplace, parties, quizzes!

Of course, our Great and Beloved Leader being the iron-fisted kill-joy tyrant he is, such frivolity will never happen.
It would be unthinkable.

And, if it’s unthinkable now for workers, we’re entitled to ask why it was okay for those in Downing Street to act as they did.

The rules might have been overly-complex, poorly written, or even a bit daft and unnecessary: but the Government headed by Number 10’s principal resident brought those laws into force and encouraged their enforcement.

And so, readers, Badger is happy. If the UK Government lacks the moral integrity to follow its rules, laws, and mandates, why on earth should Badger bother?
Why should you?

Win or lose, always booze!
If you’re lifted by the rozzers while partying yourself into a stupor, tell them you’re only following the standard of conduct that the Cabinet and UK Government think is acceptable for a leader.

You can imagine it now, can’t you, readers?

It’s the Jubilee Bank Holiday. To celebrate, David Simpson leads a jolly conga of all sixty councillors and the senior staff down Quay Street to Wetherspoons before they all boogie on over to Eddie’s for a bop and a latey.

Will Bramble throws shapes on the dancefloor while John Cwmbetws Davies lets his hair down, and Rhys Sinnett experiments with pole dancing.

And it’s all funded at public expense.

No, readers, of course, you bloody can’t.

Delightful confection though that idea is, you don’t really expect elected members and senior staff to behave like a troop of baboons let loose on a mile-high stack of fermented fruit.
It must be acceptable because it happened in Number 10 during several lockdowns.
No more lockdowns mean it’s time to party like it’s 1999.

It’s all a bit Richard II, readers: within the hollow crown, the antic sits,
“Scoffing his state and grinning at his pomp,
Allowing him a breath, a little scene,
To monarchize, be fear’d, and kill with looks
Infusing him with self and vain conceit
As if this flesh which walls about our life
Were brass impregnable…”

We can all be certain our Universe King, Alexander Boris dePfeffle Johnson, has a brass neck, readers.

With a liar and a fool running the country, we all have the right to lie and act foolishly.
It’s only fair.

Think of it as the first step in the Government’s levelling-up programme. We are all elevated to the status of being able to break the rules, act like bumbling oafs, and twist the truth out of shape because we are transported to the level of our political leaders.

If levelling up means anything, and that’s open to question, it surely includes doing what we see our leaders do instead of what they say.

That observation concerning privilege and its abuse lies at the heart of a properly important question that nobody seems ready to ask, let alone answer.

When it comes to upholding values and standards in public life, are we content to let the people we elect get away with almost anything?

Sure, they may bring in the odd office holder to fulfil their tokenism and careerism briefs, but that’s window dressing for the intersectionally challenged.

All parties – not just the Conservatives – have lost whatever moral force they once had.
Labour is called “Labour” because it once represented the labouring classes. Now, it appears to represent the voice of mildly miffed Guardian readers upset that the price of their Manuka honey has risen and that not enough is being done to save the red squirrel.

The Conservatives’ main appeal was to tradition and order. Having iconoclasts running the parliamentary party has brought the destruction of tradition and abandonment of order. The boys in blue live in a state of almost perpetual revolution. Like all revolutions, they’re going around in circles.

The Liberal Democrats are like Plaid Cymru in Wales; it depends on where they’re standing. Plaid is considerably less left in the Y Fro than in the Valleys and cities in which it scrabbles for a toehold. It’s the same with the Liberal Democrats: where they want Labour votes, they’re a left alternative; chasing Conservative votes, more like “wet” Tories.

The main parties barely sputter along like a clapped-out tractor.

Like our tractor, without any moral force behind them, they’re simply there, holding up the traffic behind them.

And, as everyone knows, the thing about traffic jams is that they not only hold up what’s time-sensitive and urgent but can end in crashes as frustrated drivers try recklessly to overtake or find a shortcut.

When everything’s an aspiration, a strategy, a plan, a policy goal, a target, or an ambition, it’s easy to lose sight of the fact that actions matter most.

Not plans to act, but going out and doing something to address an issue that needs addressing. And doing it now.

Twelve years in Westminster for the Conservatives. Twenty-three in Cardiff for Labour, and all there’s really to show is Brexit.

Whether you view that as a triumph or a disaster, it’s bog-all towards what needed doing when governments took office and what remains undone from that list.

And now, readers, if you’ll forgive him, Badger intends to follow the PM’s example and drink so much that his memory fails him.

Badger and the Grand Slam