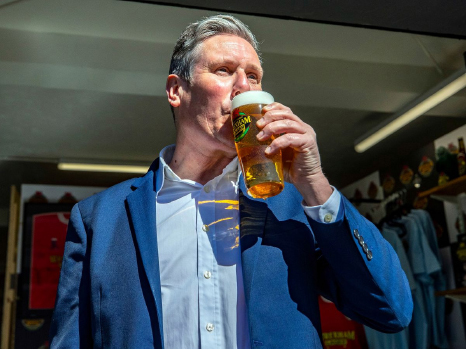 What goes around comes around, they say. And over the last couple of weeks, Labour leader Sir Keir Starmer will have ruefully concluded that they are right.

A puritan leading a party of Coronazis, through the whole pandemic Starmer played self-righteous adherence to the Covid regulations for all it was worth. Caring, community-spirited Labour stood against the callous, grasping Tories. Labour cared about your nan; Tories cared about their wealth. Labour stuck to the rules; Tories broke them. And Labour weren’t just scrupulous about obeying the millions of rules that were in place: at every stage they said there weren’t enough rules and wanted loads more.

Every time the Government tried to give people a break and slacken the Coronavirus regulations off, Labour had a pink fit. Sir Keir in the House of Commons looked like a great pompous llama heading a herd of sheep who bleated outrage at any relaxation of the rules: TOO FAAAAR TOO FAAAAST! TOO FAAAAR TOO FAAAAST!

Labour loved the pandemic. Socialists found, to their vindication and delight, that the British public actually enjoyed the smack of communitarian, authoritarian government; particularly when combined with the indiscriminate disbursement of other people’s money. They delighted in forgoing a certain amount of fun, in return for seeing the people they resent being more seriously inconvenienced. The only problem with Labour politicians’ obsessive mask-wearing was that it precluded any outward display of how pleased they were with themselves for wearing them.

Labour’s heroes weren’t the people going about their lives as best they could and bending the rules when they had to, but zealots like that repulsive nurse who gloated about ordering a man to wait in the hospital car park while his wife died alone. Covid made Britain a nation of curtain-twitching narks, and Labour were pleased to whip up the Stasi sentiment, encouraging us to grass in anyone we saw stepping out of line. This was particularly the case if the anyone we saw happened to be a Tory politician.

After making the inevitable discovery that Boris and his entourage didn’t spend two years behaving like monks, Starmer milked the Partygate affair it for all it was worth. While Boris partied, Labour’s attack adverts read, your nan was gasping for her last breath.
Now, it’s dawning on Sir Keir that he might have milked that cow to death. We’ve all seen the short clip of Starmer slurping back a bottle of beer after a campaign meeting last April. At first, it didn’t get much traction. But the more he banged on about Boris Johnson’s Covid crimes, trying his ineffectual best to go in for the kill, the more the press started digging into what, inevitably, became Beergate.

Covid regulations on 30 April last year were strict. Gatherings of people, other than for work, were prohibited. Pubs and restaurants were only allowed to serve food outside in the rain, to groups of no more than six. Despite this, Durham students walking past the Labour Party’s constituency office were surprised to see Sir Keir swigging a beer, unmasked, in a room together with two dozen other similarly bare-faced activists. It’s almost as if they weren’t that worried about catching Covid –and passing it on, to the likely elimination of several Durham constituents’ nans– after all.

The circumstances of Beergate are embarrassing enough for Starmer in themselves. Just as he was rarely seen in public, even outdoors, without a mask on his face, you wonder when he has ever been seen in public with a beer in his hand. It’s altogether too Faragist an image, and doesn’t fit with the strait-laced, new-model-army persona. But as usual, however embarrassing the original indiscretion, the subsequent cover-up has been the real PR disaster.

First, Labour made the ‘mistake’ of forgetting that the Growler was at the gig. Then they forgot to tell us that activists shared a buffet, contrary to official guidance. And just like Boris’s flimsy excuses over the Downing Street parties, Labour’s line on Beergate takes the public for fools. Starmer continues to swear blind that at 10pm on a Friday, with a big day of election campaigning to follow, he and his troops were all going to go straight back to work after their curries and their beers.

With Boris, disregard for the rules is factored in, and no-one is even a little bit surprised to hear him bullshitting his way out of trouble. Starmer is supposed to be more serious; a grown-up politician who will mop up when the Lord of Misrule finally dances off in bacchanalian chaos.

When viewers of a GMB interview –hardly Paxmanesque in its intensity– saw Starmer squirm and wriggle on the hook; narkily refusing to answer straightforward questions about the campaign curry night, it isn’t something they will quickly forget. Sir Keir didn’t look like a Director of Public Prosecutions; he looked like the man in the dock. He didn’t look like the leader who will restore public trust in politicians; he looked as shifty as Boris.

Badger and the Road to Utopia