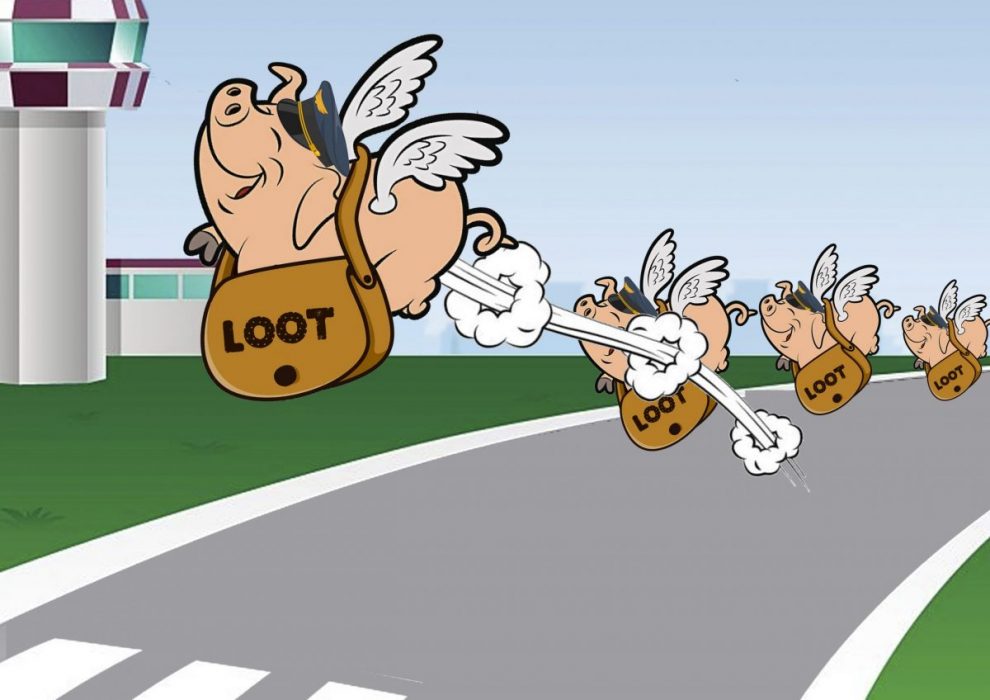 AT LAST, some good news from Cardiff airport.  Thanks to the enterprise of the Pembrokeshire Pork Producers Association (PPPA) and a contribution from the Welsh Government (WG), a new cargo will shortly be departing from the currently under-utilised and government-owned asset.  Chair of the PPPA, Betsi Schweinsteiger, said that her association was pleased to be working with the WG in this public-private partnership, believed to be a first.  Our members have donated 42 prime pigs to the venture, hopefully the first of many.

The WG is initially giving £42m to the venture.  The Trade Minister, Sel Granise AS, said the airport was clearly a good investment, and we are happy to reinforce that whimsical notion today.

Moneybags, each containing £1m, will be strapped to the pigs, and they will fly off.  Pigs are more intelligent than humans, so we have granted them temporary flying licences.  Pigs will fly!  Asked where the pigs and £42m were going, the minister said that was commercially sensitive, so he could not divulge their destination.  Describing this initiative as a bacon of hope, he declined to answer further questions.

In a further boost, the airport administration has been notified of some upcoming flights of elephants to Cardiff.  Dumbo would be the first, bringing pleasure to children after a difficult time, the source said, and we are expecting a herd of white elephants from the National Infrastructure Commission anytime soon.

We all hate being ripped-off, I am sure.  But successful English entrepreneur, Terry Richman, said that rip-offs are simply a matter of perspective.  He recommends that people simply find themselves on the right side of the rip-off, not on the wrong side.

In an unsurprising development given the recent rise of support for independence in Wales, the Welsh Conservatives are to change their party name again.  Andrew Duckhouse (no relation), the Leader of the Conservatives in Wales, said that many members have recently become concerned about the apparent and inappropriate association of our party name with Wales.  This was never intended, as our unionist credentials are second to none.  In future, we will be known as the British Conservatives (West Britland branch).  No one should be confused about where our loyalties lie from now on.

We look forward to working with our Unionist colleagues in the Labour Party, who have a similarly appropriate relationship to their national British Party, in combatting the wild and irresponsible separatism of the Plaid Cymru extreme-left socialists, Mr Duckhouse said.  Backwards to the Future!

The European Commission have decided to change the name of the British Isles to the European Archipelago.  A spokesperson denied that this move had anything to do with Brexit.  It was merely part of a long-term plan to remove geographic anomalies across Europe, she said.  Irish MEPs had made a case for the name Irish Archipelago, but this was thought to be too parochial.  After the vote, one Irish MEP was philosophical but said that the Irish isles were still smiling!

Approached for comment, Nigel Farage was incandescent, and is unable to be quoted in a family newspaper.

News from the Bahamas where the police have been trying to locate some youths who keep defacing the name of a golf club, altering it from Links to Stinks.

The owner, believed to be English, has criticised the police for not being very diligent, and denied there was sympathy for the miscreants in the local community.  I employ most of them, so they had better watch out, he said.  Although paid the very generous minimum wage, there are ways this can be eroded, with training fees, charging for uniforms and stopping toilet breaks.  And I poot no more than the national average despite my luxury diet, he said.

The new Usk bridge on the as-yet unbuilt New M4 is to be named as The Right Honourable Alexander Boris de Pfeffel Johnson Superbridge, Highways England has announced.

Signs as on the Prince of Wales Bridge will embellish the new bridge.  They will protrude over the sides so that the title and name can be seen in full to the same scale.  Union flags will surmount each tower and be added to both the other and the Severn Bridge.

When constructed, the TRHABdPJ Superbridge will create large new shadows over Newport, similarly to the manner in which its namesake has cast a shadow over England.

It is understood that merely a substantial majority of neighbourhood, environmental and socialist groups have failed to understand the largesse that the bridge and the New M4 will bestow on selected contractors in the region but mostly on investors elsewhere.  While air quality in Newport is expected to decline, this is surely nothing compared to the economic benefit reaped by those at one end of this highway.

Defence Review highlights Westminster’s absurdity
What have Labour done for the poorest communities in Wales over their 22 years in power?
Comment