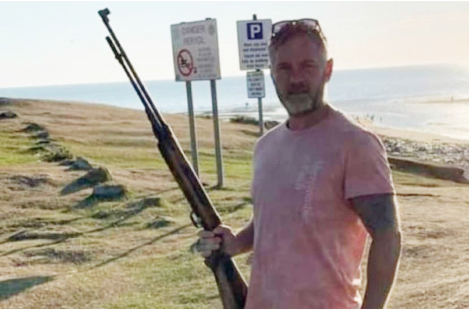 Among the hundreds of thousands of Covid-19 related deaths, you would have thought none would go so unmourned by newspaper editors as the demise of the silly season; the semi-eternity around the dog days of a dying summer when, traditionally, there is no news at all.
Covid did for the last couple of silly seasons, and just when you thought 2022 might be different along came galloping inflation, vertical energy prices, a serious drought, the ferocious war in Ukraine and yet another Tory leadership contest.

With all this real, honest-to-God news to report and no silly stuff whatsoever in August’s papers, news media around the UK were faced with a real dilemma when a Plaid Cymru councillor, Jon Scriven, decided it was a good idea to fire up Facebook by posing with a scary-looking rifle on a Bridgend beach:

‘Ogmore-by-Sea tonight’ posted Jon Scriven, representative of the Welsh Nationalist interest on Caerphilly’s Penyrheol ward, ‘for a quick swim and make sure there wasn’t [sic] any English people trying to cross the channel.’

It is rare enough that anything happening in Wales makes the national news at all. A bad-enough train wreck or gun rampage might do it; or a particularly amusing Drakeford bêtise like a public health measure prohibiting the sale of children’s clothes, but otherwise the news typically ends at Bristol. Tradition, however, is a powerful thing, and the sight of a Plaid councillor disporting himself à la Cayo Evans had delighted hacks clearing whole pages of Monday, Tuesday and Wednesday’s editions to devote space to the perfect silly season story.
Scriven, whatever his intentions, certainly succeeded in looking silly. You don’t come across like a Welsh Nat version of James Bond when the DB5 in the picture isn’t a million-pound classic Aston-Martin, but a cheap, Chinese-made SMK DB5 airgun.

Scriven’s pop gun sells for under a hundred quid new, and (while you could have someone’s eye out with it, particularly if you poked them there with the barrel), it’s generally so useless as a lethal weapon that the Free Wales Army might have been tempted to take it on exercises. A volley from it would barely make a putative English migrant go ‘ow’.
Cllr Scriven, of course, was just ‘avin a laff, and possibly satirising the UK Government’s overcooked rhetoric and half-baked enforcement against migrants crossing the (English) Channel every day in small boats. It would be surprising if anyone reading his post was so amoebically dull as to believe Scriven tooled up and made the trip to Ogmore because he in fact smelled the blood of an Englishman: there are no recently reported cases of outward migration from England to Wales using sea routes from Lynton or Minehead to Ogmore: migrants might instead be tempted to use the shorter and safer crossing between Aust and Beachley. Or even one of the bridges.

However, the stupidity of a Welsh public prepared to elect Labour governments at every opportunity afforded to them perhaps shouldn’t be underestimated, and no-one ever got on in Welsh politics by talking up to the electorate. Perhaps that’s why, in response to Scriven’s obvious joke, Welsh Conservative leader Andrew RT Davies put on his best stern-and-disappointed face, and said he was ‘speechless’ which, for anyone familiar with RT, sounds very unlikely. ‘This is a Plaid Cymru councillor. Adam Price cannot let another scandal rage on without decisive action. This sort of xenophobic attitude is beneath us.’

Jane Dodds MP, delighted that anyone was paying attention to her ghost of a party, denounced the ‘clear implication of violence and xenophobia in this post.’ She called for Plaid to suspend Scriven immediately, and must have had a face like Harry Potter first realising he can do magic when they actually did. Penyrheol means ‘end of the road’, and it looks like that’s just what it is for Jon’s political career.

And that wasn’t all. No howl-round of confected outrage is complete without the involvement of the constabulary, so some time-wasting thumper reported the post to the police. As Supt Michelle Conquer confirmed: ‘An allegation of malicious communications has been reported to us and we are investigating the matter.’

Quite why policemen keep investigating obvious jokes is a bit of a poser. Ten years ago, (when a chump called Paul Chambers, annoyed at possible delays to a flight, tweeted that he would ‘blow Robin Hood Airport sky high’) a Divisional Court led by the Lord Chief Justice made it perfectly clear that posting obvious jokes on social media isn’t an offence. That was despite the (then) Director of Public Prosecutions Kier Starmer –a man who wouldn’t recognise a joke if it came up behind him with a gigantic air horn and actually blew him sky high– personally insisting that the case against Chambers continue.

While it might show rotten judgment, Jon Scriven’s silly joke wasn’t malicious or xenophobic. It certainly wasn’t meant seriously and shouldn’t be taken seriously, least of all by the police. But whatever the outcome of Supt Conquer’s investigation, Scriven will now probably be stuck for life with DBS checks throwing up details of his investigation for a ‘non-crime hate incident’.

The police should stop indulging culture-war belligerents and party political squabblers. They have no business squandering public resources by policing people’s jokes. And Plaid Cymru should stick to scaring migrants off using the Bristol Channel route by telling them hair-raising stories about nuclear mud.

Badger and the Road to Utopia

Andrew RT Davies: Here’s how we can extinguish the dangerous flame of separatism.