Home » Tell us something we don’t know, Dom 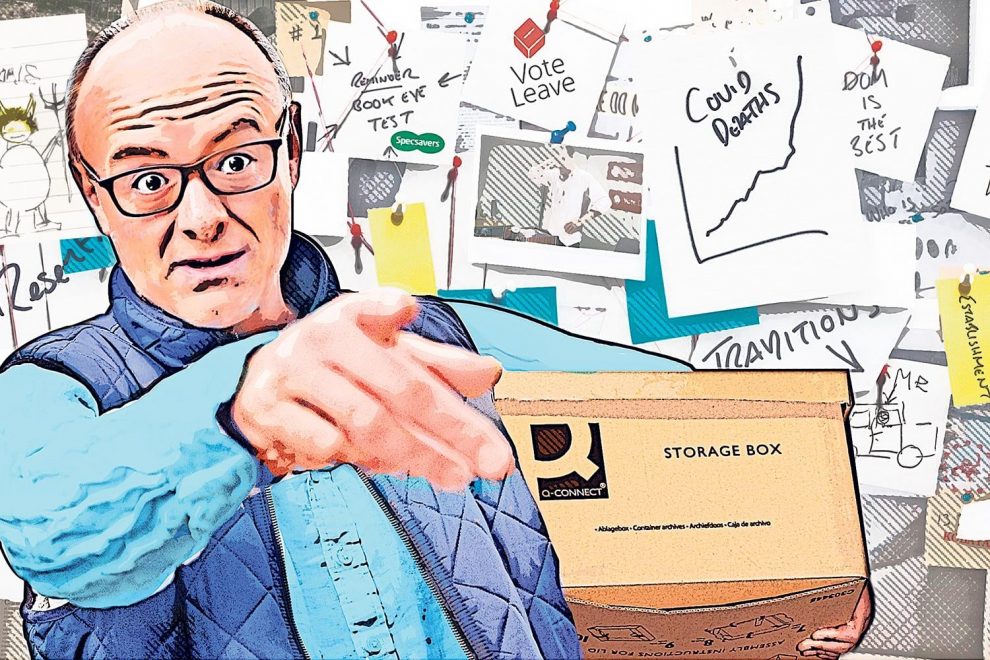 LIKE the story of the hapless frog that carries a scorpion across a flooded stream, Dominic Cummings’ involvement in the government of the United Kingdom was only going to end one way.

The man who David Cameron identified as a ‘career psychopath’ came out jabbing furiously on Wednesday, when he appeared before a House of Commons select committee, and an enraptured press.

You could forgive Boris Johnson, like the frog, for feeling some dismay as jab after jab went into his back. After all, a year ago the PM staked his own reputation on supporting his pet psychopath after the Barnard Castle jaunt. Failing to sack Cummings then saw Boris’s approval numbers crash from +31 to -2 in a fortnight. But despite everything, Dom still turned round and stuck in his stinger. It’s in his nature.

Cummings has been bouncing around with his pin pulled out ever since being sacked in November; possibly at the behest of Carrie ‘Princess Nut Nut’ Symonds, with whom he had the sort of murderous feud you rarely find outside the senior ranks of Plaid Cymru. Dom had a couple of gratuitous jabs at the PM’s “crackers” girlfriend and her stupid dog, but that was just for fun. Ultimately the best way of getting even with Carrie is to have her boxed up with all the Lulu Lytle tat and carried downstairs and out of No. 10 when Boris himself gets evicted.

Over eight hours of gloriously vindictive and staggeringly selective testimony, Cummings did his level best to bring this desirable object about. Johnson, he said, was unfit for office, smashing around between bravado and panic like a wonky-wheeled shopping trolley. Boris, a mere Prime Minister, even thought he didn’t have to defer to Marcus Rashford.

A certain amount of what Cummings had to say was right. The Government made a complete Horlicks of track and trace. Procurement of PPE early in the pandemic was a shambles. There was no plan for shielding, and Covid-positive patients were released to let the virus run riot in care homes. The Department of Health and Social Care is useless, and Health Secretary Matt Hancock is a shower.

But the basic thrust of Cummings’ criticism of the Government’s handling of the pandemic is that we weren’t ruthless enough in locking the country down. Boris, he claimed, was happy for Covid to let rip. He prioritised the economy over people’s lives. The Government, Whitehall and scientific advisors were guilty of groupthink, assuming voters wouldn’t put up with a lockdown. It would have been better to have some sort of dictator in charge.

Cummings, peering at the pandemic through Hubble Space Telescope-sized lenses of hindsight, believes Boris should have locked down earlier and harder; ideally some time last January before the Communist Party of China had ever owned up to the existence of Covid-19. And locked down earlier, and harder, the second time round. This despite the Welsh Government (remember October’s ‘circuit breaker’?) doing just that and it being demonstrably sod all use.

If Boris Johnson’s instinct was to allow the 99.75% of people who aren’t at much risk from Covid to catch it (ideally while protecting the vulnerable), he had the right idea. Whatever Dominic Cummings’ love of lockdowns, there has been little correlation between the severity of anti-Covid measures that countries have introduced, and the number of deaths.

Two strategies probably work; the blunt Australian/ NZ model of shutting the doors, and the more sophisticated Taiwanese strategy of having a properly effective test and trace system; finding and containing individual clusters of infection before community transmission takes hold.

Britain didn’t have the option of slamming the doors shut to keep Covid out at the start of the pandemic. It was all over the country and community transmission was rampant before the scale of the problem became apparent. We then failed dismally at tracking and tracing infections. The UK and devolved Governments (and a sceptical public who aren’t prepared to put up with Chinese-style intrusions into their privacy) share responsibility for this.

This didn’t mean that lockdown was inevitable, or justified. Boris was right to balance the interests of personal liberty and the economy with the effects of the coronavirus. The overwhelming majority of those who died from Covid-19 were older than the average UK life expectancy. However sad for individual families who lost relatives, their deaths are not a national tragedy. We don’t put up mawkish monuments to the half a million people who die every year from other –sometimes more avoidable– causes, and shouldn’t treat every Covid death as a martyrdom.

The real scandal isn’t that Boris wanted to do everything he could to avoid imposing a lockdown; it’s that he lost his nerve.

The main thing we learned from Dom’s testimony is just what a good thing it is that Dom is no longer at the heart of government. In January last year, Cummings blogged at Tolstoyan length to the effect that the country needed more weirdos and misfits involved in the decision-making process. Now, he rails against political parties who selected misfit Boris and weirdo Corbyn as their leaders.

If anyone hadn’t sussed out before Wednesday that Boris is a shambolic, impressionable baby, they weren’t paying attention. Cummings’ spite says more about him than about his old boss. His jabs don’t matter nearly as much to the public as the jabs going, every day, into their arms. See less