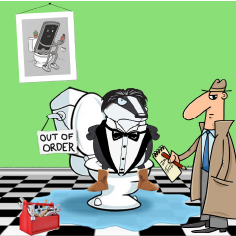 BADGER doesn’t think much about retirement.
It sounds so final, and he can’t afford it.
Yes, readers, you’d be surprised that working for an independent newspaper is NOT a path to personal wealth and luxury.

Forget your ideas of indulged journos racking up the il vino collapse on expenses and enjoying long lunches at the publisher’s expense.
If you’re lucky, you’ll get a piece of cold pizza after the sales team has finished with their incentivised snacks.

It’s not that the design team and writers live on lemon juice and rice crackers, as only one look at the circumferences and gravitational pulls of several of the same will attest. However, for writers and designers – including the lovely people who make Badger’s page look pretty every week – it’s pretty much head down and work until you’ve run out of words to type, grammar to correct, and photographs to place and caption.

And occasionally – as a side benefit – we get to insert the odd snarky remark in the full knowledge that Our Beloved Leader and Great Helmsman Kim-Jong-Tom spends very little time checking everyone else’s work because he’s fixated on his own copy and the newspaper’s financial performance.

With this in mind, Badger’s message to aspiring journalists is much the same as his advice to aspiring lawyers: train as an electrician or a plumber. You’ll need the same skills: connecting things together and investigating mysterious leaks.

Badger makes this observation from a position of experience and his doubt that indebting oneself to the tune of tens of thousands of pounds chasing illusory higher-paid jobs is no way to prepare for real life.

When Badger was younger, he received career advice from a kindly gent at his school: “First, you’ll go to Oxford and then make your mind up from there.”

It was well-meant and sincere, but as Badger considers how some of his contemporaries have fared, he doesn’t half envy them going to the old Pembrokeshire Technical College and learning trades that have allowed them to live in comfort, mortgage-free, and have regular overseas holidays.

Lately, the publication of exam results gave Badger reason to ponder why parents, schools, and education authorities fixate on sending 18-year-olds to universities to continue their learning.

The UK lives in a low-wage economy where the paths to the top-paying jobs rely on luck, connections (especially familial ones), and a preparedness to sacrifice every aspect of a balanced life to get on.

The top executives of the top companies and the top civil servants come from a narrow cadre with upper-middle-class backgrounds.

Suppose you’re Joe Soap from Monkton, the Mount, or Bush Camp. In that case, your chances of getting to the top of the tier in a large corporation or government are effectively zero.

The UK isn’t the land of opportunity for all; it’s the land of life chances for the few.
Think of it as a foot race.

There are 100 metres to the finishing line, and you’re Usain Bolt.
95 metres down the track is Boris Johnson, Jacob Rees Mogg, or any other privileged unathletic halfwit and an affected drawl.

By the time you’re closing in on them, they’ve already collapsed in a heap over the finish line.
If you’re lucky, one of them might clap a patronising hand on your shoulder and tell you, “it’s not the winning, it’s the taking part.”

If a competition is worth anything, it’s always about winning.
And if you think that applies only to England and Westminster and not Wales and the Senedd, you’re having a laugh!

If you can get by in Welsh, are glib, have half a brain cell (i.e., have a degree from Cardiff Uni or Aber), and are prepared to act as a fart-catcher for the Welsh Government, you’re as mediocre as most Senedd members, and probably far more able than most Welsh Government ministers. The worst you’ll end up with is being appointed to a third sector think tank to think approved thoughts in the approved way.

It’s not that the game of life isn’t worth playing, but you need to know the unspoken rules before you take part.

In Badger’s opinion, an eighteen-year-old is better off learning transferrable work and life skills before going to university.

Getting into the habit of work makes university far easier.

Live life outside the shelter of education, and you’ll find coping with higher education a breeze.

Even better, you might discover that you don’t need to go to university to get where you want to go and find a career that suits you.

That means while your contemporaries are getting up to their ears in drugs, drink, debt, and the disappointment that comes with attending uni (it’s hit and miss, to say the least), you’ll have hard coin in your pocket, probably a driving licence, and maybe a halfway decent motor.
And – as Badger says – you might find a rewarding career that pays you actual money while you learn a trade or profession.

The average graduate salary is, sad to say, peanuts compared to what an experienced person with a trade can earn.

You leave university with memories, a degree, a debt mountain, and a summer job paying minimum wage. Unless, of course, you have those precious family connections and money to grease the wheels.

The graduate premium – the added value that degrees add to a lifetime’s earnings – has disappeared as more and more people go to uni and get degrees.
It’s as basic as supply and demand.

More graduates competing for jobs drives graduate wages down. Only in disciplines where there is a shortage – for example, in the sciences and medicine can you get close to cashing in your investment before you get to forty and wonder where your life went.
Suppose at 18, you go on apprenticeships and learn a trade.

In that case, you’ll qualify with a wage that outstrips the graduate average and also have something that a freshly minted graduate doesn’t have: years of experience.
Badger doesn’t know whether career advice is any better now than it was when he was in school, he suspects it is, but one thing is certain.

If “university” is always the answer, we’re asking the wrong questions.

Boris is in deep trouble for partying last Christmas, and serve him right

Badger looks for levelling up