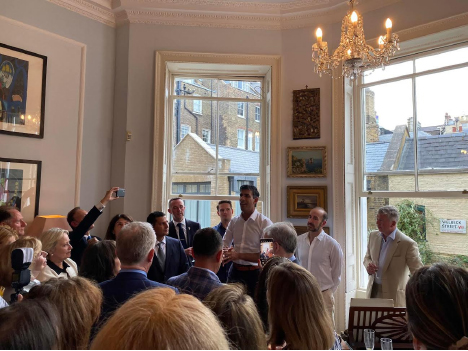 Being among the privileged class of people who read The Pembrokeshire Herald, you knew (from this column back in July 2019) what was coming:

‘Anyone in possession of a Conservative leadership ballot paper and a conscience should vote for Hunt, rather than letting an amoral semi-competent self-absorbed bluffer loose on No. 10 Downing St. But, being realistic, Boris is going to win this and become our Prime Minister, Gawd ‘elp us.’

This bleak judgment of the outgoing Prime Minister wasn’t entirely discredited by subsequent events. In 2019, the Tory Party elected a leader who, however charismatic, was morally unfit to lead the country. Mutatis mutandis, a similar sort of feeling may be overtaking readers in the closing weeks of this year’s Conservative leadership contest.

Boris was bad. Just as bad as expected. But he was at his best a captivating, inspiring, funny sort of bad man. He was a bad man who realigned British politics and won his party an enormous Parliamentary majority. And Jeremy Hunt, being honest, was and is a bit of a dreary old vacuum. Hunt would still have beaten Corbyn hollow, because no-one in their right mind wanted Corbyn in charge, but the cartoonists would have had a tedious few years of it. Now, they’re sharpening their pencils because it looks as though the Conservatives might be about to mess things up all over again by selecting Liz Truss to succeed Boris.
Liz Truss, whatever her strengths and it’s fair to say they haven’t made themselves widely apparent yet, is widely perceived as a bit of a weirdo.

We shouldn’t hold being a weirdo against her. You probably have to be either a weirdo or a wannabe World King to want to get involved in politics in the first place, and by and large the weirdos are more trustworthy. But weirdos don’t do well with the public: look at William Hague, an absolutely brilliant man who could have been one of our greatest Prime Ministers, and a show-winning weirdo. Opposite Tony Blair’s World King, Colgate-grinning glitz, he was a hopeless failure.

Liz Truss is a bit similar to Hague but without the brilliance. Her first tweet after getting onto the ballot alongside Rishi proclaimed she was ‘ready to hit the ground’; an unusually astute prediction. Another astute prediction, back in 2016, was that Brexit would lead to ‘a world where [her daughters] need a visa or permit to work in Europe; or where they are hampered from growing a business because of extortionate call costs and barriers to trade.’
‘Leave,’ she blasted, ‘cannot name one country we would get a better trade deal with if we left the EU.’ Spot on, and Truss went on to prove herself absolutely correct by failing, as Secretary of State for International Trade, to negotiate any deals better than the ones we had before leaving the EU.

Among the Brexity orthodoxies of 2022’s Tory party, you might have thought this an awkward place to be coming from. Not for Liz Truss. If you can slough off the skin of being a former LibDem who called for the abolition of the monarchy, you can disembarrass yourself of being a Remainer too. When Leave won, Truss grabbed a trident and reinvented herself as Brexit Britannia personified. The party have lapped it up, and although Sunak (perhaps opportunistically rather than out of principle) actually campaigned and voted for Leave, it’s Truss who’s getting the Brexit vote.

To deal with the threat of Sunak’s advantages over Liz Truss in metrics like competence, intelligence and electoral appeal, Truss’s Ayn-Randian enthusiasts struck on the very slightly hypocritical but mercilessly effective expedient of attacking ‘Rishi Rich’ because he is wealthy and successful. After all, the British people can forgive many things, but they rarely forgive success. Boris got this and always went out of his way to look like a shambling, dilapidated wreck. He ruffled his hair and crumpled his suit before going on telly; combing it again when he was back inside the Downing St flat and being Alex not Boris.

Some commentators have got the party’s problem with Rishi spectacularly wrong. Jo Maugham QC –preening vulpicide and the self-promoter behind the absurd Good Law Project– overcame fierce global competition to utter the crassest tweet of the year: ‘Do you think the members of your Party are ready to select a brown man, Rishi?’

Well yes, Maugham, you Kimono-clad cretin, they are. And in Kemi Badenoch, they would probably have been ready for a leader several shades further along the Dulux colour chart.
The problem with Rishi Sunak isn’t his ethnicity. It isn’t what he looks like, but what he represents. He stands for the party of Cameron and Osborne, rather than the post-2016 party of Boris. Brexit changed the Tory party utterly: Poujadist populism displaced globalism, and Rishi looks like the candidate of the globalist ancien regime.

Rishi’s other problem is the Curse of Heseltine: the oft-repeated aphorism that he who wields the knife never wears the crown. However impossible and infuriating he was to keep, lots of Tories loved Big Dog, and the way Rishi had him put to sleep looked just a bit too ruthless.
The Conservative and Unionist Party has demonstrated an apparently limitless capacity to make the wrong choice in leadership elections. The last two saddled the party with a robot, followed by a rogue.

This time round, anyone in possession of a Conservative leadership ballot paper and a conscience should vote for Rishi, rather than letting a gormless, semi-sentient weathervane loose on No. 10 Downing St. Unfortunately, the strong indication at present is that the Tories aren’t ready for Rishi. Let’s hope the country’s ready for what we get instead.

Good riddance to the (English) Covid regulations: Now Wales must do the same.