Home » Vaccine passports are the first step to a digital Stasi 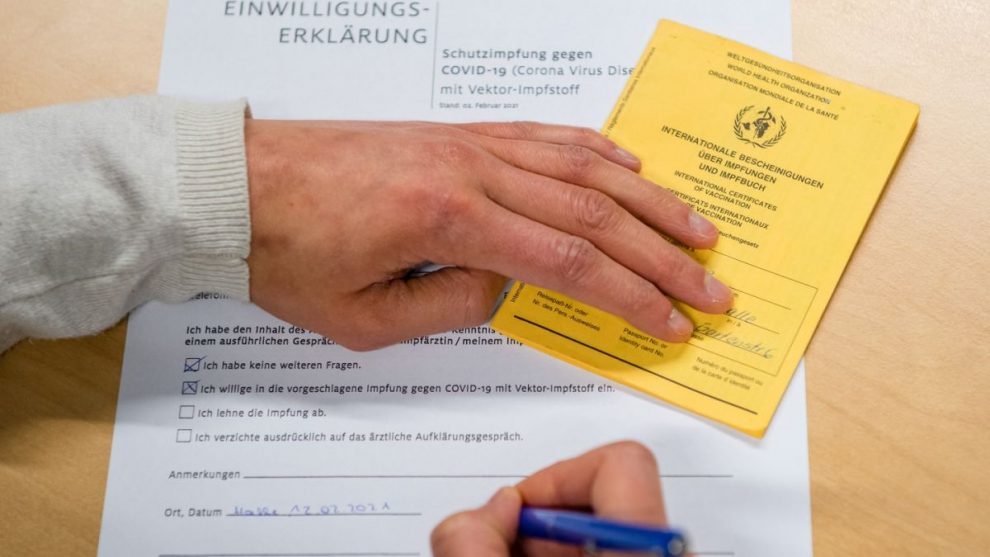 If being in power rather than in opposition changes a politician’s view of any one subject, it
tends to be the subject of identity cards.

Take Boris Johnson. As shadow arts Minister, it fell to him in 2004 to attack Tony Blair’s government for its plan to introduce universal ID cards. In his Telegraph column in November of that year, Boris related how well his efforts to oppose the measure went down with the public: “So what!” yodelled my audience, “We want ID cards! We had them in the war! If you’ve got nothing to hide, you’ve got nothing to fear!” And they started gurgling and drumming their feet like the impis of Chaka, and I hung my head and gave up.” Boris berated people who would toss their freedom away for the promise of a little more security, and resolved –if he himself were ever challenged by authority to produce an ID card– to “take that card out of my wallet and physically eat it in the presence of whatever emanation of the state has demanded that I produce it.”

It should, in the light of that comment, be a surprise that Boris’ own government is now suggesting we all submit to measures far more intrusive than anything Blair and Blunkett ever planned. It is bad enough when emanations of the state are going about demanding to see your papers; far worse when the state contracts this duty out to the private sector. If plans for a domestic ‘vaccine passport’ go ahead, not only emanations of the state but prospective employers, bus drivers, leisure centre staff and even the barman at your local pub will be calling for “your papers, please.”

This appalling idea has been warmly received among the Coronazi community, for whom no restriction of liberty could ever be excessive, if imposed to protect whatever miniscule percentage of the 0.5% of people who might otherwise die from the Covid who haven’t yet been vaccinated. The concerns of bedwetting liberals at human rights watchdog Liberty (that it would create a two-tier society of the vaccinated and unvaccinated) and of trade unions (that it would lead to unlawful discrimination) count for little against ‘safety’ from the Covid.

But their objections have force. While it’s right that there has never been any presumption of liberty in foreign travel –and foreign governments can demand travellers be vaccinated against diseases like yellow fever before entering their territory– it is completely different to allow business, employers or our own Government to pry into our medical records. People may have perfectly sound reasons for avoiding vaccination, and should not face the prospect of becoming second-class citizens as a result.

Pregnant women are advised not to have the vaccine. A woman who wants to become pregnant may avoid it for the same motive. There are good reasons why employers are not allowed to ask women whether or not they intend to have children. Allowing employers to see an employee’s vaccine status, let alone refuse work to people who aren’t vaccinated, drives a coach and horses through these protections.

Even if people refuse vaccination because of their own fathomless idiocy, or because of something Piers Corbyn posted on Facebook, we still shouldn’t discriminate against them with this kind of coercion. The high levels of herd immunity that will follow from mass vaccination will protect those who can’t take the vaccines, and even those who wilfully refuse to take them.

The Government should do everything it can to increase uptake among people who –either through misconceived fears around the safety of vaccines, or because they are stupid enough pay attention to Piers Corbyn– are reluctant to have the jab. Trying to force compliance through vaccine passports will have the opposite effect. It will intrude on everyone’s privacy and freedom, and only give the paranoid something else to be paranoid about.

Boris was stung by an initial perception that he had been cavalier about the Covid, and is now grotesquely overcompensating by keeping the country locked down for months past any semblance of the original purpose of the restrictions. The lockdown has softened the public up to expect and accept almost any degree of state intrusion. The 2004 crowd who gurgled and stamped their approval of ID cards dismayed Boris then, but are cheering him on to adopt a thoroughly bad idea now.

ID cards failed last time round because, in the early 2000s, the Government wasn’t up to the
technical challenges of producing a viable national ID database. Its lamentable efforts to set
up a workable track and trace system during the pandemic suggest that’s still true.

The private sector does things differently. Most of us carry a database of information that Blair
and Blunkett could only have dreamed about, everywhere we go. Elsewhere, governments
have already co-opted private tech companies to turn personal devices into a digital Stasi.

China is able to track and trace its citizens with terrifying efficiency because it tracks and
traces them all the time anyway.

Vaccine passports for domestic use are a superficially attractive answer to our immediate
problem. But vaccine passports are not like wartime ID cards, which people delightedly
burned when emergency regulations expired. Smartphones are too big even for someone of
Boris’ size and appetite to eat. If we once allow this kind of intrusive use of technology into
public life, we will never be rid of it.

Leafleting isn’t a crime
A Call to Arms
Comment