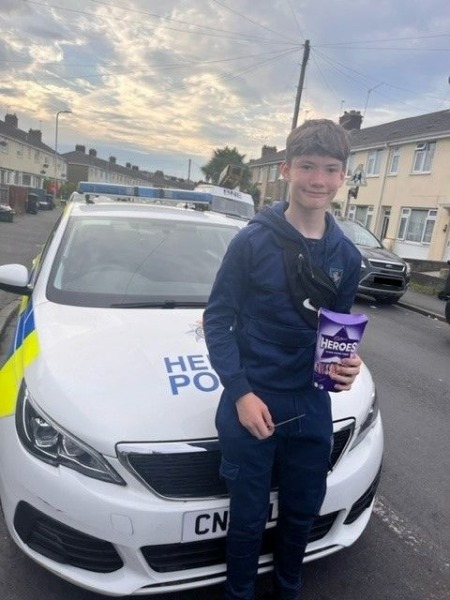 A NEWPORT tennager has been hailed a hero after tending to a young vulnerable boy and alerting authorities.

Gwent Police received a report of concern for the welfare of a young boy on Thursday, June 23, in the Duffryn area of Newport.

Kyron Powell, 14, came across a vulnerable and distressed child on Thursday afternoon while he was walking home from school.

He contacted his mum to let her know that he would be home later than planned and asked her to call the police.

Kyron stayed with the boy to keep him calm and safe until officers arrived.

Inspector Hannah Welti said: “Kyron is an absolute hero. His actions allowed police to get there quickly and ensure the child’s immediate safety and get him the support he needed at that time.

“To say thank you, I visited Kyron and took him some chocolates and a Just Eat voucher after I heard that his amazing actions meant that he had missed his dinner.

“We were all extremely impressed by Kyron’s mature and sensible response to this situation and wanted to thank him.”

Outstanding work from a young member of the community.

Caru Ceredigion – Caru Cymru – Be a lover, not a loser