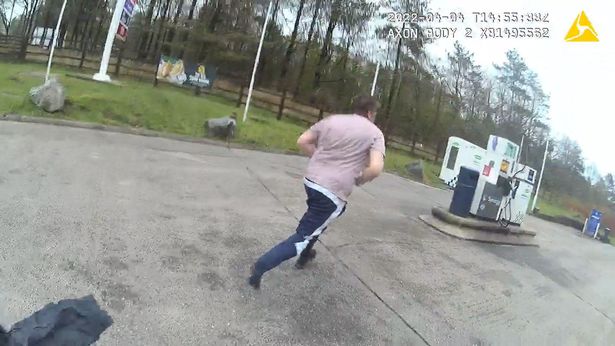 A HERMES driver was apprehended at Pont Abraham services in Cross Hands with over £17,000 worth of heroin in his van. Recently released footage shows Thomas James, 35, attempting to run from the police.

James, of Heddfan, Llanddarog, Carmarthen, used the same van he used to deliver parcels to transport heroin between west Wales and Newport six times before being caught by the police on his seventh trip.

On April 4, he was found to be carrying more than £17,000 worth of heroin, as well as £140. Police attempted to detain him at the scene, but James resisted and injured one of the officers.

When stopped by PC Grant Limebear, James appeared nervous and attempted to walk around the back of his Ford van before using force to try and get away from the officers. He wriggled free of his jacket, causing the officer to fall and injure himself.

Other officers arrived on the scene, arresting James and taking him into custody.

Once detained, James refused to provide the police with the pin number for his phone. An investigation using automatic number plate recognition revealed he had gone on six separate trips to transport the drugs.

He later admitted to police officers that he had transported smaller amounts on those occasions. Judge Paul Thomas stated that the previous trips would have still produced a significant amount.

James was a heroin user at the time. He was approached by a third party and decided to enter into a “commercial arrangement” to transport money to Newport and return to west Wales with the drugs.

In exchange for his services, James would be paid £200 and half an ounce of heroin. He claimed he had no involvement in the drug dealing after delivering them.

James appeared in Swansea Crown Court for sentencing having pleaded guilty to possessing a quantity of diamorphine with the intent to supply, being concerned in the supplying of diamorphine, and assaulting an officer in the execution of his duties.

After being sentenced to three years and six months in prison, Judge Thomas commented: “You physically resisted and caused injury to the officer’s elbow and finger. I have no doubt that you acted in panic, but that is no excuse.

“Heroin brings untold misery to users and their families. You come from an affluent, supportive family and you went into this enterprise with your eyes wide open.”

Have you seen this Pontypool man?

Cardiff, the city built from coal – How black gold shaped a capital