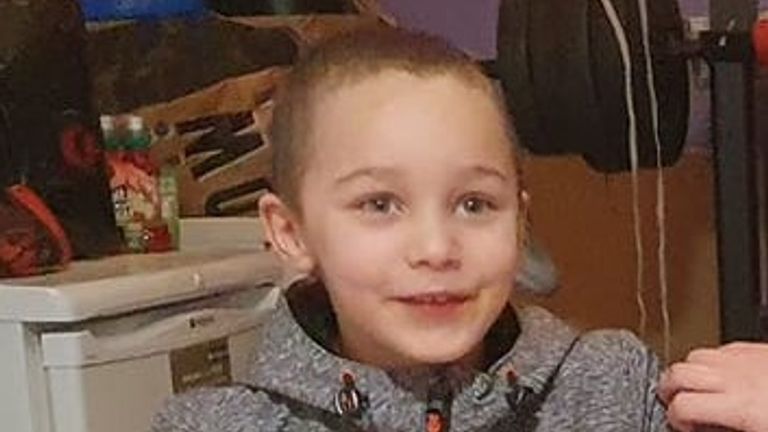 A JURY has heard that a five-year-old boy, was brutally murdered before being tossed in a river like rubbish.

Logan Mwangi was found dead on in the Ogmore River in Bridgend on July 31, 2021.

Logan had suffered injuries a pathologist described as “so extreme you would expect to find them as a result of a fall from a great height or a high-velocity road traffic collision”.

Logan’s mother, Angharad Williamson, 30, of Sarn, Bridgend, and stepdad John Cole, 40, of Ynysawdre, Bridgend, entered not guilty pleas in relation to the charge of murder.

A third defendant, who cannot be named for legal reasons due to his age, has also entered a not guilty plea.

The trial, which started on Monday at Cardiff Crown Court, heard from prosecutor Caroline Rees QC who said Logan “was described by those who knew and loved him in his short life as a lovely little boy and chatty, polite, and kind”.

“He was just five years old when his lifeless body was found by police in the River Ogmore in Sarn on July 31, 2021.

“The prosecution’s case is Logan was murdered and each of the defendants in the dock played their part in killing of the five-year-old child.

“Having killed Logan behind closed doors…each of the defendants played their part in a cover-up of the true circumstances of his death.

“Each were desperate to save themselves and each prioritised their self-preservation over everything else, in particular over the needs of Logan.”

Ms. Rees said Williamson, around the time of Logan’s death, “found him challenging to parent” and said Cole was “a person [Logan] should have been able to look up to and trust”.

Cardiff Crown Court heard that Williamson made a 999 call to police in which she reported Logan was missing at 5:46am on July 31 .

Ms. Rees said to the jury: “You’ll hear a recording of that call. The demeanour at first was distressed and upset but you should not allow yourselves to be fooled by that.

“She said she found Logan to be missing from his bed and shouted ‘Logan’ as if she was shouting for him. She also said the back garden had been left open…

“Angharad Williamson continued to behave distressed and hyperventilated, begging the police to find Logan and told them John Cole and [the youth] were out looking for him.

“Police officers were sent to Lower Llansantffraid, Sarn. At the time of the phone call John Cole and [the youth] were seen walking around the area purportedly looking for Logan, shouting his name and as though they were looking for a child.

“The prosecution say the defendant John Cole accepts the search together with the 999 call made by Williamson was an elaborate charade to cover up the fact Logan had died behind closed doors and knew full well where his body was.”

Ms. Rees told Cardiff Crown Court that: “All three defendants acted as though Logan had gone missing and as though they had no explanation.

“The prosecution say this was a concoction of an elaborate performance they had decided upon to throw police off the track and avoid their own behaviour coming under the spotlight.”

The prosecuting QC said Cole had subsequently admitted removing the dead body of Logan from the house and attempting to dispose of it in woodland near the home.

“His body was found on its side in the River Ogmore near Pandy Park dressed in mismatched pyjamas. His body was not covered in any way.

“Sadly, despite best efforts of police and paramedics, Logan could not be saved and he was pronounced dead at the Princess of Wales Hospital at 7.15am on July 31.”

A post mortem was required to ascertain the cause of Logan’s death and, Mr. Rees told the jury that: “The examination revealed Logan had suffered catastrophic injuries to internal organs and his brain which had caused his death – injuries of such severity an expert described them as so extreme they would expect to find them from a fall of great height or a high-velocity road traffic collision.”

The five-year-old’s injuries included 56 injuries to his head and face, trunk, arms and legs, a fractured shoulder, bleeding to the scalp and back of his head and a significant trauma to the brain.

Three sentenced for ABH in Bangor

Clocaenog Forest Man: Did you know him?

Clydach Murders: “A lot of people have a past, but that doesn’t make them a murderer.”