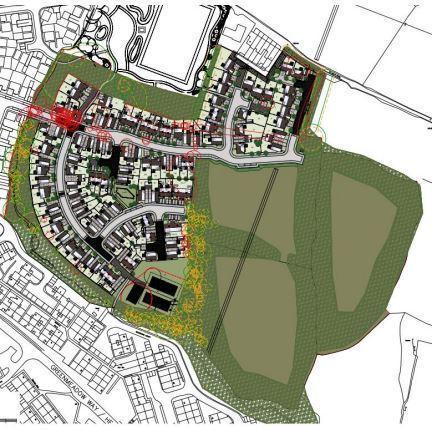 A FINAL phase of the redevelopment of a former police training college for housing has been approved with 70 more homes getting the go-ahead.

But a councillor who raised concerns over flooding, following two earlier phases of the housing redevelopment in Cwmbran, was told the site isn’t at risk.
Upper Cwmbran councillor Steve Evans told Torfaen Borough Council’s planning committee he had witnessed flooding in the area and asked: “The area is prone to existing flooding what are we doing to make sure the area does not suffer severe flooding again?”
The council’s planning consultant Duncan Smith replied there had been no objection from the drainage authority and said: “This site isn’t prone to flooding.”
Mr Smith said there had been flooding at Greenmeadow Way, following phase one of the site’s development, which he said had been resolved and that the plan also involves a sustainable drainage application.

The former Police Training College in the St Dials area was the first purpose built police academy of its kind in the UK when it opened in July 1974 and trainee constables from across Wales were drilled there before its closure in 2005.
Councillors were told the third and final phase follows the approval of 327 homes with the second phase of 108 nearing completion. Though the local plan had earmarked the site for 350 homes in total the latest approval means there is permission for 397.
The two, three and four-bedroom houses in a mix of terraced, semi-detached and detached properties, and one block of two storey apartments, will be built on fields which formed part of the grounds of the college.
Mr Smith told councillors when the planning blueprint was approved the site was considered to be in a sustainable location and the need for more housing could be balanced with protecting the ecology of the fields within the former college site.
He said as the latest phase has been reduced from 84 homes initially proposed the development would be kept to two of four fields with only a small part of the third developed.

Pontnewydd councillor Stuart Ashley asked about future management of the site as the fields were previously designated as Sites of Importance for Nature Conservation, which areas recognised for their biodiversity but which do not meet the requirements for statutory protection.

Planning officer Steve Williams said the site was designated as of one of importance previously but said “without appropriate biodiversity management sites tend to lose their value.”
He said retaining the fields was considered a “sustainable compromise” and there will be wildlife protection plans and ecology management plans agreed with developer Barratt David Wilson Homes.
Llanyrafon councillor David Williams said he worked at the former police training college and asked to be updated on some of the planned affordable homes which a report said did not meet the required standard.

Mr Smith said their design had been replaced with a style which meets the standard and the requirement for affordable housing has now been met.
Cllr Williams said: “I’m pleased to see 30 per cent affordable housing on this site, it is much needed.”
The application was approved unanimously.