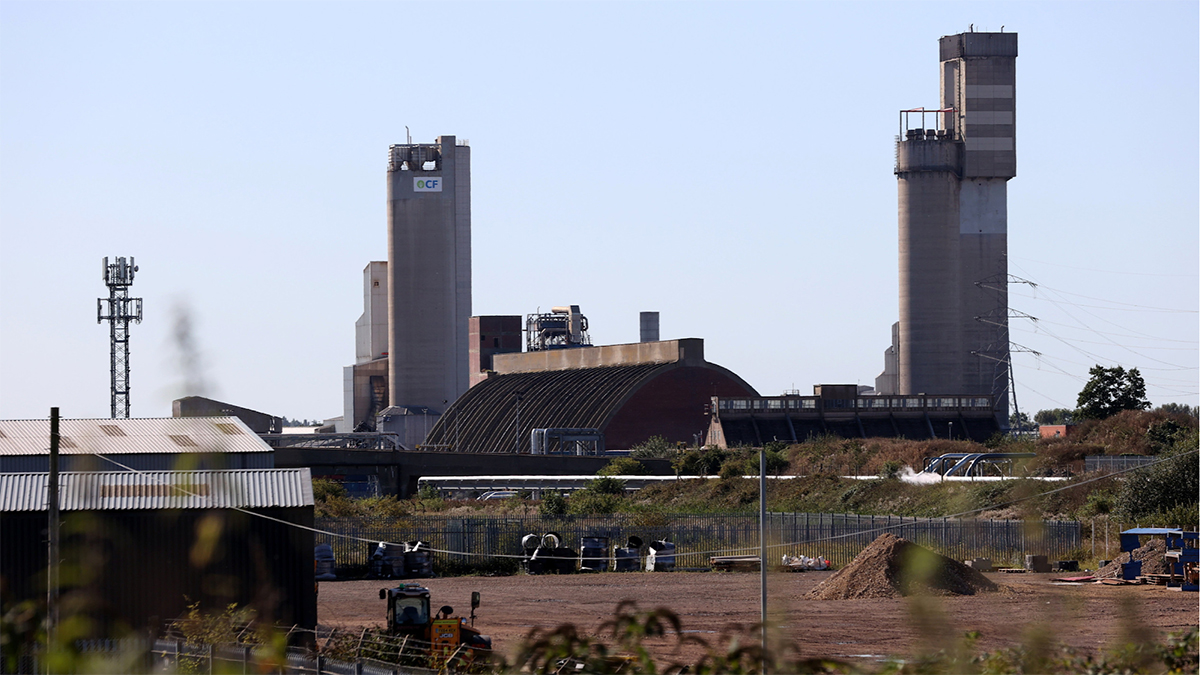 ON FRIDAY afternoon (August 25), CF Industries announced that they would ‘temporarily halt’ ammonia production at their Billingham site, citing uneconomical market conditions as the reason for the closure.

The company will import ammonia to continue running the ammonium nitrate (AN) and nitric acid upgrade facilities. Therefore, CF anticipates they will be able to fulfil all contracted orders of AN in the coming months.

UK natural gas futures are nearly five times higher than last year’s.
Given the rapidly increasing cost of gas, anecdotal information suggests that if current gas prices were used to produce fertiliser, we could see AN’s price doubling from the contracted prices of between £650-£850/t for AN trading earlier this summer.

This will place greater reliance on imported Urea and liquid UAN products for the foreseeable future.

This closure will significantly impact the availability of CO2 domestically.

CF has notified its CO2 customers of the intended shutdown, with no specific date given, but CO2 production will halt at that point.

This will significantly increase the need for imports at a time when fertiliser plants across the EU are also closing, in light of high energy market prices.

The UK’s other major CO2 producer, Ensus, is due to close for routine maintenance in September for several weeks. This will further tighten the availability of CO2 for agricultural, food and industrial purposes.

Given the time of year, with the run-up to a busy Christmas period being exacerbated by the FIFA World Cup, this will significantly further strain an already exhausted food supply chain.

Arable farmers across the UK have already been experiencing soaring fertiliser costs over the past six months due to increased natural gas prices due to the war in Ukraine.

With CF ceasing production completely at its Ince plant this year, domestic fertiliser availability had already been tightened.

Fertiliser manufacturers across Europe are also struggling with the rising costs of production. This begs the question, where will the required ammonia be imported from and at what cost?
With the tight European supply, domestic fertiliser prices will likely remain high for at least the mid-term.

We also need to question the potential for lower physical availability of fertiliser impacting applications in spring 2023.

As well as this closure having an obvious impact on fertiliser prices for arable producers, the shortage of CO2 domestically will also impact the slaughter of poultry and pigs.
In turn, this will affect the demand for cereals for animal feed.

PORK
Over the past year, abattoir staff shortages led to pigs being rolled and kept on-farm longer.
Rising feed and energy costs will heavily impact producer margins, with some producers exiting the industry altogether.

While those backlogs have abated, the cost of production remains high.
If slaughter capacity was to be compromised, this would put producers back into an incredibly challenging situation.

With soaring costs, this situation may not be sustainable anymore for many and will likely lead to further reductions in pig numbers and potentially more leaving the industry altogether.

The poultry sector is already struggling with rising input costs and the impact of inflation on consumer demand.

Therefore, a shortage in CO2, or a rise in the cost of it for slaughter, may well lead to a further reduction in poultry production.

With poultry the largest consumer of cereals out of all the feed sectors, this will also impact cereal demand.

Forage availability and quality this year are lower than usual due to the hot, dry summer we have seen. Due to the rising cost, some producers did not apply typical levels of fertiliser to pasture this season.

As with arable farmers, the closure of the CF plant will continue to impact the price of fertiliser for livestock producers. Given those challenges, there will likely be a heavier reliance on substitute feeding livestock compounds/straights.

In turn, margins for producers will be squeezed further.

In addition, the shortage of CO2 that this closure brings with it will also affect processing, with it being used in meat packaging and preservation processes.

In the short term, we will see a tighter CO2 market, which may impact the ability of abattoirs and processors to flow animals and products through the supply chain.

Longer-term, the impact of high energy markets and the potential of even higher fertiliser prices – or a lack of availability – puts 2023 UK food production at significant risk.

As we have seen from this summer, our weather is getting even more variable.

The market impact, coupled with another severe weather event in 2023, would lead to a significantly negative cost outlook for levy payers and increased consumer prices.