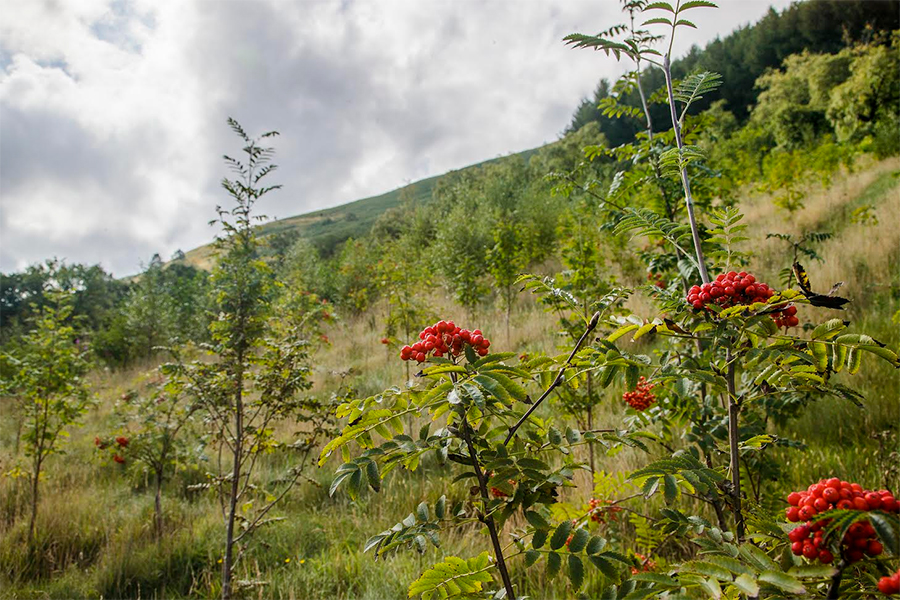 The announcement followed a short, intensive review by the Deputy Minister for Climate Change, Lee Waters, which looked at removing barriers to woodland creation.

The Welsh Government says it must plant 43,000 hectares of new woodland by the end of this decade to make the country net zero by 2050.

Its plans are hugely controversial, with many farmers concerned about the potential loss of productive agricultural land during what is little more than a “green-washing” exercise.
Julie James claimed: “Planting more trees will play a fundamental role in helping Wales to avoid some of the worst effects of climate change.

“Woodland creation can also provide a wealth of benefits to local communities from green jobs to places for nature.”

Using words that will shock Rural Affairs Minister Lesley Griffiths, Ms James said: “We want farmers in Wales to be central to our plans.”

She continued: “They know their land better than anybody else so, to ensure the sustainability of their business, we will leave decisions around where trees should be planted entirely with them.

“As long as they meet the UK Forestry Standard, we are on hand to offer the support they may need.

“We know they, like many others, are keen to reduce their carbon footprint and help us on our Team Wales mission to tackle climate change head on.”

Derek Morgan, who farms in Llangurig, Llanidloes, has planted around 58,000 trees after wanting to diversify his holding from being primarily a sheep farm.

Mr Morgan said: “I had a rethink on my strategy for the farm just a few years ago, deciding to plant on 17.5 hectares to create woodland that sits comfortably into the local landscape.

“I am very proud of what we’ve achieved because it will allow me to produce sustainable timber to supply local markets and means there will always be a business here. It is also lovely to see the wildlife and new habitats it has brought to the land.”

Ceri Davies, executive director of evidence, policy and permitting at Natural Resources Wales, said: “Increasing the tree canopy across Wales as part of the Woodland Creation Scheme is a crucial part of the effort to tackle the climate and nature emergencies and to help achieve the nation’s net-zero ambitions.

“Natural Resources Wales will play a key role in this ambition, working with local stakeholders, landowners, farmers, and the forestry sector to understand the barriers to tree planting and how they can be overcome.

“We also help ensure all schemes meet the UK Forestry Standard, ensuring that any new planting safeguards wildlife and the environment, enhance the local landscape and carefully manages our natural resources.

“We look forward to continuing this work with the Welsh Government and our partners to further the extensive tree planting ambitions in Wales and to deliver the many benefits it can provide for us all.”

SCHEMES MUST NOT HIT FOOD PRODUCTION

NFU Cymru has again reiterated that Welsh agriculture recognises the industry’s role in tackling the effects of climate change. The union has emphasised that farmers are best placed to identify areas for planting at an appropriate scale on less productive land that is unlikely to hinder food production.

In response to the Welsh Government’s announcement, NFU Cymru Rural Affairs Board Chairman Hedd Pugh said: “We are still awaiting further detail of the schemes and how they will operate in practice, how the funding will be allocated between them and over what time period, as well as what the payment rates will be.

“Without that detail, it’s very difficult to comment on whether this scheme will deliver the outcomes the Welsh Government wishes to see.

“With the growing rise in costs of planting trees and fencing out woodlands, payment rates will need to properly reflect these costs – something which hasn’t happened in recent years.
“We welcome the fact that the announcement refers to simplifying funding for farmers, which needs to address the union’s long-held concerns around the administrative burden associated with access to and compliance with previous grant schemes.

“In 2021, NFU Cymru released its Growing Together strategy, which outlines a plan for sustainably increasing tree cover in Wales, integrating trees into existing farming systems rather than replacing them.

“We need to see how these new schemes align with our own vision for sustainable tree planting in Wales.

“Many farmers are receptive to the notion of increasing tree cover at an appropriate scale on areas that they identify as their less productive land.

“We hope these schemes will make it easier for farmers to do this.

NFU Cymru is clear that approaches to increase tree cover in Wales should not impact our ability to produce food and properly safeguard our communities, culture, and language.”

The two new schemes are:
The Small Grants Woodland Creation scheme simplifies funding for farmers and other land managers to plant small areas of trees on land in Wales under two hectares which is agriculturally improved or of low environmental value.
The Woodland Creation Grant offers to fund tree planting and fencing for farmers and land managers with a woodland creation plan approved by the Welsh Government.
Both schemes will provide grants for tree planting, fencing and gates and 12 years of maintenance support.
The indicative budget for the two schemes is £2m for the first application window this year, with £30m available for the following two years.

The schemes have been designed so there is no loss of the Basic Payment Scheme provided SPS (Single Payment Scheme) was claimed in 2008.