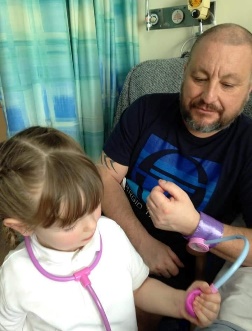 A MAN who discovered he had terminal brain cancer after watching Channel 4’s 24 Hours in A&E, is the inspiration behind his family’s 10,000 Steps a Day in February Challenge.

Glenn Farley, from Newport in South Wales, was just 51 when he died in November 2019, 19 months after being diagnosed with a brain tumour, which turned out to be an aggressive glioblastoma multiforme (GBM).

Affectionately known as ‘Granchie Glenn’ by his grandchildren, Maise, seven and Lilly, three, he never got to meet youngest granddaughter, Ella, who is one.

The keen Newport County A.F.C fan and steelworker at Orb Steelworks in Newport, began to experience drop foot – a condition which affects foot and toe mobility – causing Glenn to drag his leg as he walked.

Concerned he may have suffered a stroke, along with his wife, 54-year-old Tesco employee, Thomasina, he phoned the doctors’ out of hours helpline who told him to present to A&E at Royal Gwent Hospital in Newport.

A scan of Glenn’s body from the neck down found nothing unusual and he was kept in overnight for monitoring.

The next day on his return home, Glenn suffered multiple seizures.

After watching Channel 4’s popular medical documentary, ‘24 Hours in A&E’, Glenn mentioned to his wife about a brain tumour patient on the show who had the same symptoms that he was experiencing, prompting the couple to go to Royal Gwent A&E again, and a scan of Glenn’s head revealed the devastating news that he had a fast-growing tumour on his brain.

Thomasina said: “I’m not very good at watching anything medical on TV as it makes me squeamish. After Glenn mentioned about the patient on 24 Hours in A&E, we went straight to the hospital, instead of phoning the doctor.

“It was incredibly shocking to hear the diagnosis and we were told that the average survival rate for someone with a GBM is just 12-18 months. We were heartbroken.”

In March, surgeons at Heath Hospital in Cardiff removed most of the tumour, during which time a further two tumours were discovered and would be monitored for any changes. Over the next nine months, Glenn underwent gruelling radiotherapy and chemotherapy treatment which successfully shrunk what was left of the GBM.

However, the operation left Glenn in a wheelchair, and doctors thought he may never walk again.

Thomasina added: “Our family really rallied around for us at such a hard time, especially my sister’s husband, Chris. He took him every day to his treatment, physio and the gym, he even took him when Glenn was ready to go back to his first football match. They were more than family, they were best friends and they even worked together.”

After months of physiotherapy, the determined father-of-two walked unaided for the first time on the final day of his chemotherapy treatment and in July 2019, Glenn lived out his wish as he walked daughter Katie, 31, down the aisle.

A month later, whilst awaiting a knee operation, Glenn experienced a pain in his chest and when he woke up the next morning, he fell to the ground having lost the use of both of his legs.

He was taken to Royal Gwent Hospital, where doctors were unable to determine the cause of why his legs stopped working.

At the time he was waiting for his latest scan results and after a phone call to the Velindre Cancer Centre, Glenn was told the cancer had spread to his spinal cord.

After two weeks of radiotherapy on his spine, he was referred back to Gwent Hospital where he caught sepsis three times and was eventually discharged to receive palliative care at home. He died surrounded by his family on 16 November, the same day as his son, Luke’s 33rd birthday.

Thomasina said: “Whilst Glenn was at home he had lots of visitors from work, plus friends and family who brought with them such positivity. We had a flag made with his picture on and his friends, Gary and Darren still take it to every Newport County home game to remember him, that shows you how loved he was.

“You wouldn’t have known he had a brain tumour to look at him. He kept saying: ‘should I have a headache or something?’ because he felt well in himself and he didn’t look poorly.”

Four years after he was first diagnosed with the disease, Thomasina and their eldest granddaughter, Maisie, will be walking 10,000 steps every day in February in memory of their beloved ‘Granchie Glenn’ to raise money for Brain Tumour Research.

Thomasina took part in the event for the first time last year and raised more than £1,000 for the charity. This year she is hoping to raise even more.

Thomasina said: “Maisie and I have been loving the challenge so far, with all of our family cheering us on. Glenn would have loved it and I know he’d be very proud of what we were doing to help other families going through something similar.”

Brain tumours kill more children and adults under the age of 40 than any other cancer yet historically just 1% of the national spend on cancer research has been allocated to this devastating disease.

After a successful first challenge a year ago which raised nearly £1 million to support vital research and campaigning, Brain Tumour Research’s 10,000 Steps a Day in February Challenge is back. The charity is calling for people to step up to the Facebook challenge and make it even bigger and better in 2022. Participants will receive a free emoji t-shirt and fundraising pack when they receive their first donation and a special medal if they raise £274 or more.

Mel Tiley, community development manager for Brain Tumour Research, said: “The best part of the 10,000 Steps a Day in February Challenge is that you can fit your steps in with your everyday life. That could be having a coffee and catching up with friends at your local park, walking your commute or school run instead of driving, getting off the bus a few stops earlier or walking around your house whilst on the phone. You could even team up with friends or colleagues and complete your steps together!

“We are very sorry to hear about Glenn’s diagnosis and passing. We are very grateful to the family, including Thomasina and Maisie for their ongoing support and for signing up to take part in 10,000 Steps a Day to fund vital research to find a cure for brain tumours. Less than 12% of those diagnosed with a brain tumour survive beyond five years compared with an average of 50% across all cancers.”

Brain Tumour Research funds sustainable research at dedicated centres in the UK. It also campaigns for the Government and the larger cancer charities to invest more in research into brain tumours in order to speed up new treatments for patients and, ultimately, to find a cure. The charity is the driving force behind the call for a national annual spend of £35 million in order to improve survival rates and patient outcomes in line with other cancers such as breast cancer and leukaemia and is also campaigning for greater repurposing of drugs.

To join the Facebook challenge group, go to www.facebook.com/groups/10000stepsadayinfebruary2022

In It Together Festival: First wave of event line-up announced