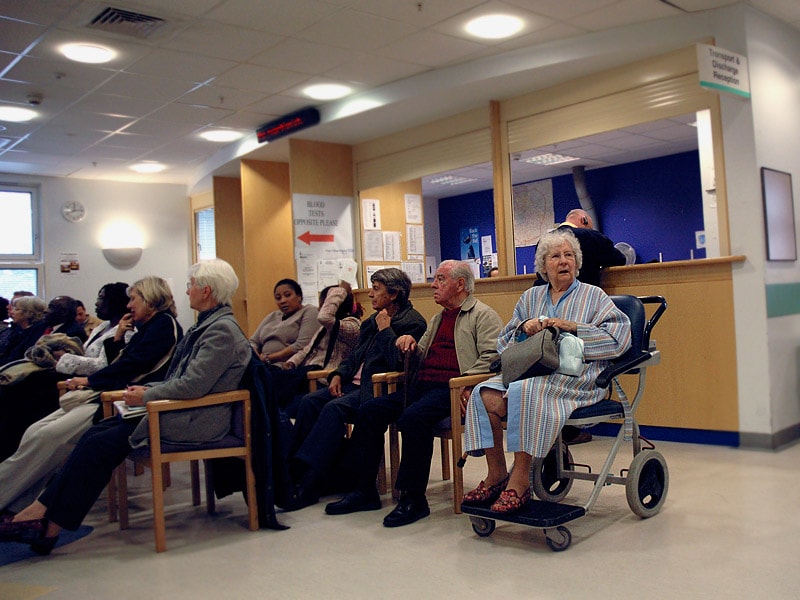 LATEST Welsh NHS data for December showed the highest-ever number of patients waiting for treatment with 683,331 on patient pathways – over 14,000 more than September – leaving 1-in-5 Welsh people on the waiting list.

The number of people waiting over two years increased has jumped over 22,000 in just three months to nearly 50,000.

The figures are likely to get worse as the postponement of elective surgery across several health abords due to the Omicron variant is still being counted.

Additional figures showed a third (31.8%) of patients had to wait over the four-hour target. This is the fifth-worst month for the Welsh NHS on record. The target to get 95% admittances seen in four hours has never been met in its 12-year existence.

8,998 patients waited over 12 hours in Welsh hospitals’ A&E departments, 444 more than in December.

Those aged over 85 spent an average of over eight hours to be seen in A&E – the longest average wait since comparable data was first recorded in April 2012.

Only 28.9% of amber call patients – which include strokes – were reached within 30 minutes.
Commenting, Welsh Conservative and Shadow Health Minister Russell George MS said:

“Every month, these figures only go to show how much work there is to be done to get our national health service into a fit state that works for patients and staff.

“It is undeniable that emergency and elective care waits have reached these heights because of the pandemic – showing there were plenty of harmful health consequences to restricting healthcare services – but we cannot just go back to what it was like before Covid either. Performance against targets was also dismal then.”

A Welsh Government spokesperson said: “We only saw the waiting lists increase by 0.2% in December, the lowest increase since the start of the pandemic, despite the fact that so many staff were diverted to the super-fast roll out of the booster programme during that month.

“Demanding winter pressures, the Omicron wave and the need to support the vaccination programme continued to place considerable strain on the NHS in December 2021.

“These challenges led to the postponement of a number of appointments and planned treatments across Wales and some people were waiting longer for treatment than we would like.

“The number of patients waiting for treatment increased again in December 2021; however, it was at the slowest rate since the start of the pandemic.

“Our ambulance data shows that January 2022 saw a decrease in the total number of calls made to the ambulance service on the previous month. However, there remain high numbers of life-threatening calls with more than 100 recorded a day.

“We have provided £248m so far to support our NHS recovery plan. In April, we will publish a detailed plan on how we will tackle the waiting times for patients whose treatment has been delayed by the pandemic.”

“When faced with such a time-sensitive task as getting the NHS back on track, there is no time to waste.

“The waiting times are beyond shocking. But they weren’t good enough before the pandemic.

“The Welsh Government should be ready with a recovery plan now, just as they should have had a plan in place before the pandemic.

“April is too long to wait for such an important matter.”

In November, the NHS in Wales recorded its worst ever A&E waits and slowest ever ambulance response times.

“It is undeniable that emergency and elective care waits have reached these heights because of the pandemic – showing there were plenty of harmful health consequences to restricting healthcare services – but we cannot just go back to what it was like before Covid either.

“The treatment waiting list was already at a record high two years ago, the longest-ever pre-Covid A&E waits were in 2019, NHS beds have been cut year-on-year by a third of what they were when Labour entered power, and there are still thousands of staff vacancies to fill.

“Under Labour, business as usual would be failure as usual.”

It stops here. Ending the physical punishment of children in Ceredigion