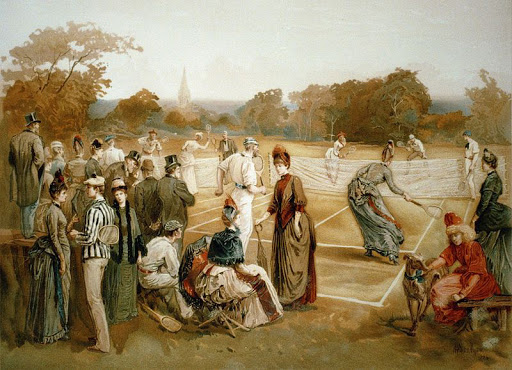 IF YOU were asked to name a sport synonymous with Wales, you would probably say rugby.

However nearly 200 years ago modern lawn tennis was invented in the country, and this is a fact that has been long forgotten by most.

On October 16th, 1833, Walter Clopton Wingfield, the man who invented the game of lawn tennis in 1874, was born in Wales.

Born at Rhysnant Hall, Montgomeryshire on 16 October 1833, he was the eldest son of Clopton Lewis Wingfield.

He had a successful military career before returning to his mid Wales estate where he was also a Justice of the Peace and a major in the yeomanry cavalry.

He subsequently married Alice Cleveland, with whom he had three sons and a daughter.

Although he didn’t know it at the time, his invention would replace the ancient game of tennis, known nowadays as real tennis.

Major Wingfield was never a great player at his own sport, and he didn’t even compete at the first Wimbledon Championships in 1877.

The game of lawn tennis was inspired by the ancient game of real tennis, a game that was very popular among European aristocracy for centuries, but which could only be played inside.

When Charles Goodyear came up with a new ball made from rubber, which could bounce on the lawn and replaced the old leather balls, many real tennis players started to find a way to play an outside version of their favourite game.

While Harry Gem and Augurio Perera were experimenting with a new game they called Pelota, Major Walter Clopton Wingfield came up with his own rules in the early 1870s.

His idea was to create a portable court for playing the old-fashioned tennis and he imagined the game being constructed on croquet courts.

He patented his game in February 1874 under the name of “Sphairistikè” (which was approximate ancient Greek for “the art of playing ball”), and in the spring of the same year, he started selling sets which included rubber balls, a net, poles, court markers, and an instruction manual.

However, his friends were none too keen on the game’s original name. Arthur Balfour, who would later become prime minister, suggested “lawn tennis”. Wingfield later added “or lawn tennis” to the title of his eight-page instruction booklet.

On top of that, Wingfield wrote two complementary books, The Book of the Game, followed by The Major’s Game of Lawn Tennis.

In its first version, the game was played on an hourglass-shaped court and the net was about 50cm higher than the one we know today. The service had to be made from a diamond-shaped box at one end only and it had to bounce beyond the service line instead of in front of it.

According to Honor Godfrey, the former museum curator at Wimbledon: “Wingfield had very good connections with the clergy, the law profession, and the aristocracy and he sent thousands of sets out in the first year or so.”

The game quickly gained in popularity, and the very first tournament was held in Birmingham in 1874.

The following year, he was invited to a meeting at the Marylebone Cricket Club (Lord’s) to discuss the standards of the game, and Wingfield then considered his sport was now entrusted to the MCC.

Around the same time, after the death of his three sons, the inventor of lawn tennis lost interest in his game.

In the following years, the rules evolved, and in 1877, the hourglass court was made rectangular for the first Wimbledon Championships, won by Spencer Gore in July.

After the authorities of the game analysed the results, it was decided to decrease the target area for the server, and to reduce the height of the net to make passing shots easier.

The official patent for the game is on display at the Museum at the International Tennis Hall of Fame, along with one of Wingfield’s uniforms.

Here’s some extra trivia: The world’s oldest surviving court (and the only outdoor one) was built in 1537 by King James V of Scotland at Falkland Palace, north of Edinburgh.

24 projects around Wales get funding to celebrate their local heritage

The history of Castell Coch

Manhattan: How 77 acres of New York are Welsh…..kind of

Jwmbi: The Elephant buried in a Tregaron beer garden