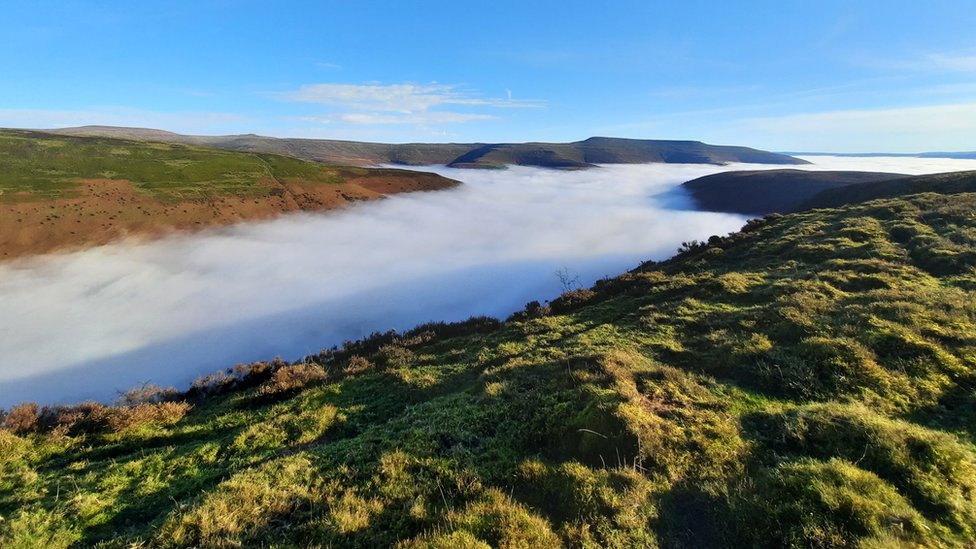 WALES is a curious land, deep misty valleys and tall peaks give our entire country a reputation for staggering beauty whilst preserving an air of mystery that calls to people all across the world…when we’re not in lockdown that is.

Stray from the beaten path though and you’ll discover that alongside well known sites like Castell Coch, Lake Bala or St. Govan’s Chapel, there are countless other sights outside of the popular gaze that we think are even more intriguing and easily as beautiful. Here are ten of our favourites:

This Carmarthen Bunker was rumoured to cost around £500,000, that’s £1.2 million in today’s money, and the bunker remains unused and empty to this day.

In 1986, several thousand people descended into Carmarthen town centre to form a human chain in protest at the bunker’s construction.

The natural blue lagoon of Broughton Bay is among the most picturesque sites on Gower attracting thousands of visitors every year (Pre Covid).

As it’s accessed on foot from Broughton Bay at low tide, no roads lead to its sheltered spot amongst the jagged rocky cliffs of Swansea Bay, it’s only normally visited by those who know of its existence.

Set at the end of a wooded valley near the village of St Ishmaels is a cove that is every bit as tranquil as its name – Monk Haven. This comes from a monastic settlement that existed here long ago.

Whilst no traces of the monks remain it is hard not to notice the high castellated wall that runs across the back of the beach. There are also the remains of a watchtower a little way along the coast path from here.

Today the estate is largely farm land and the manor house (which was actually a vicarage) is run as an amazing B&B.

With the only access to the general public being a walk along the footpath from St Ishmaels church Monk Haven is always a peaceful spot.

Looking like something straight out of ‘Alien’, Cwmystwyth mines are arguably one of the most important historical mining areas in Wales.

Steeped in history, these mines have been the site of mining activity for centuries. This visit took place in 2019 with Gwen Cavers.

Today the valley is remote and quiet, but it must have been a very different story during the 18th century when the mines were working at full capacity.

The little picturesque harbour and village of Porthgain are, without doubt, one of the gems of the Pembrokeshire coast, and one of our personal favourites, even on a cold winter day.

Set in a sheltered inlet this was once a busy port where slate, brick and granite were shipped from the local quarry.

In later years the slate trade was abandoned which set the way for its iconic coastal walks, beautiful food venues, a delightful art gallery and welsh gift shops.

In 1936, in view of the increasing likelihood of war with Germany, the British Government decided to build two new Royal Ordnance Factories, including one at Bridgend on the site.

The site, which is one of the most unusual RGHQs (Regional Government Headquarters), was extensively refitted in the early 1980s.

The accommodation comprised two adjacent tunnels, each consisting of two parallel passageways 8ft wide and 250ft long, lined with metal sections like the London tube tunnels. You may have seen this being used as part of the series ‘The Pembrokeshire murders’.

According to legend, the steep ravine was far too difficult to span, so the devil stepped in with an offer: he would build the bridge in exchange for the first soul to cross it upon completion.

The deal was struck, and the bridge built, but when it came time for the first person to step onto the crossing, a dog dashed out ahead, thus saving the citizenry from eternal torment.

Another detail of the fable is that when the devil realised he’d been outsmarted, he stormed off in a rage. Because of his embarrassment, it has been surmised that he has never returned for a visit to Wales.

Devils Bridge is internationally famous for its waterfalls and narrow gauge Steam Railway from Aberystwyth. The village is situated at the head of the Rheidol Valley in the heart of the Cambrian Mountains.

Pistyll Rhaeadr is often referred to as one of the Seven Wonders of Wales, and you can see why.

The waterfall is formed by the Afon Disgynfa stages over a 240-foot cliff, into the Afon Rhaeadr below. The tallest stage is estimated at about 40 metres with its own natural bridge.

Paxton Tower, Built by William Paxton during the early 1800s and erected in honour of Lord Nelson designed by Samuel Pepys Cockerell, this Neo-Gothic folly sits on a hilltop near Llanarthney with views of the Towy Valley and beyond.

The story suggests that Paxton’s Tower was built after Paxton stood for election as an MP for Carmarthenshire in 1802 but lost despite spending considerable amounts of money to convince the constituents to vote for him, £15,690 in total. A little bitter after defeat, Paxton wanted to make a bold statement. One of his campaign pledges had been to build a bridge over the river Towy.

Instead of doing this, he built Paxton’s Tower in a prominent position mocking the people for what they could have had.

St Cwyfan’s originally stood at the end of a peninsula between two bays, but has time has gone on the sea has eroded part of the land.

Its remains are visible at low tide, but even with the causeway, sometimes high tides prevented access. At those times services were held in a room in the nearby house.

Welsh Food Expo back as caterers gear up for busy 2022