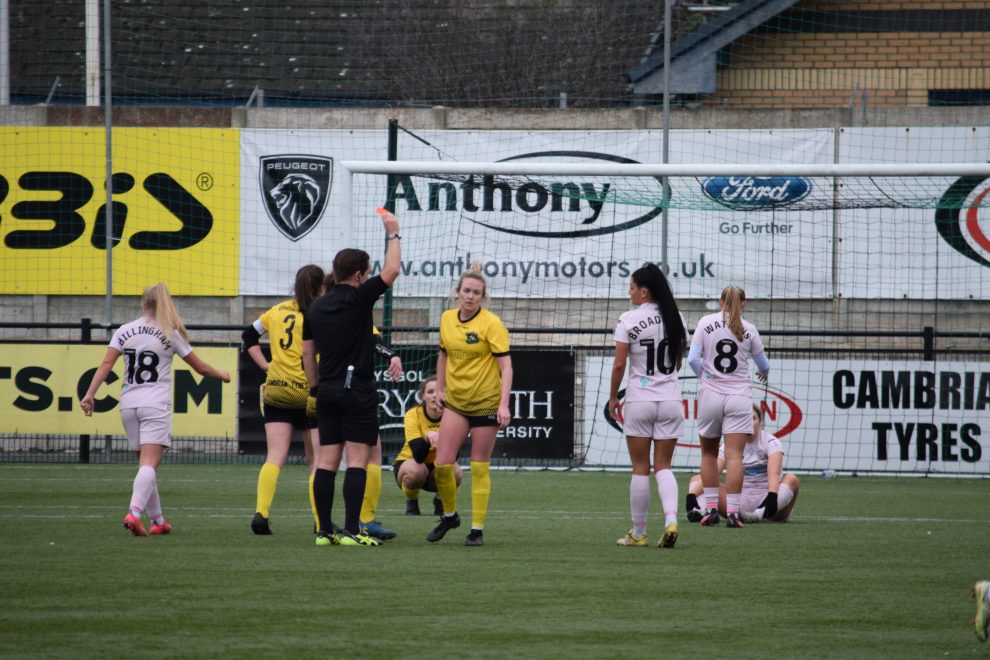 Aberystwyth Town Women put up a valiant fight against league leaders Cardiff City, despite a string of mid-match injuries and an early red card – but ultimately fell 1-5.Rhianne Oakley, Ffion Price, Phoebie Poole and two for Siobhan Walsh secured the three points for the visitors.

Aber had taken an early lead when Gwenllian Jones scored an exceptional goal direct from a corner, crashing it off the top of the crossbar and past Emily Roberts in the Cardiff goal.

But it was all downhill from there for the Seasiders. Centre half Elin Jones had been forced off after just 15 minutes having suffered a leg injury. Substitute Kel Thomas slotted into the defence – but it was she who slid into a challenge shortly before half-time and got a red card for her troubles.

It made the second half all the more difficult for Aber, who were racking up the walking wounded by full time, most notably with Shauna Chambers receiving treatment on the field for an ankle injury but limping through until the final whistle.

“It was a tough result to take in the end, really, especially after such a positive first-half performance,” said the day’s captain Rebecca Mathias. “I thought we started off really well and were on top for long spells in the first half, we created quite a few good chances, and I thought they looked lost for ideas.

“Losing Elin so early on was a huge blow for us and it’s always hard to readjust when you lose someone out of the back line. Going 1-0 up with Gwen from a cheeky corner – her speciality – I thought that was fully deserved. We kept them at bay and knew our roles and responsibilities. We looked solid defensively.

“But going down to 10 just before half-time was another blow. You know the second half is going to be a tough one and there’s going to be a lot of running, especially with Cardiff City wanting to come back and overturn that scoreline.”

She added: “It was just one of those days, and it’s a result we’ve got to dust ourselves down from because we’ve got more important games coming up. It doesn’t get any easier but in terms of our performance, attitude, workrate, desire, I think every single one of us was spot on. I’m proud of all the girls and how they stuck together and kept going.”