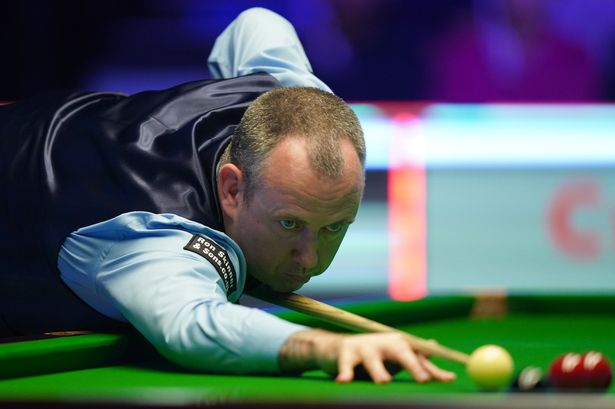 CARMARTHEN’S Mark Williams easily defeated David Gilbert to advance to the Masters quarter-finals, but only after the match devolved into complete mayhem.

Williams, a two-time champion, was leading 5-2 at Alexandra Palace when a wasp made its way down to the table and tried to attack him.

To the delight of the audience, the frenzied Welshman ducked and dove around the table in an attempt to evade the insect in his own slapstick comedy routine.

There was even a “it’s behind you” yell from referee Marcel Eckardt before the wasp took up residence on the bottom of Williams’ waistcoat, very close to his nether regions.

The Eurosport commentary team were understandably in hysterics with Philip Studd warning Williams: “You definitely don’t want to be stung there!”

“How is he meant to concentrate? It is such a crucial situation in the match but he has other things to think about,” commentator Dominic Dale added.

More comical dodging ensued, with the snooker pro compared to John Travolta in Dirty Dancing until the wasp redirected its attention to the camera team.

Following more swarming, referee Eckardt took matters into his own hands and began swatting the insect while riding on the back of one of the cameramen.

The German official managed to get rid as Dale then quipped: “He doesn’t like anyone. I thought Pantomime season was over. Where is David Attenborough when you need him?”

Williams returned to the table to applause from the audience after a little pause, but only after one final thorough search to ensure the wasp wasn’t nearby.

Fortunately for the Welshman, the event did not derail him too much, as he won the frame and advanced to the competition’s last eight.

Next up comes former world No.1 Ronnie O’Sullivan and Williams admitted: “I’m enjoying every minute of it. I don’t know how many times I’ll be back, so it’s extra special to be back with all these fans.

“It’ll be amazing, there’ll be two and a half thousand in here and I’ll probably have three people in the corner wanting me to win but that’s how it is when you play Ronnie.”

Swansea residents of all ages are being encouraged to get active this month – at low cost.
Images of how the new Tennis Centre in Bridgend could look