Home » Hunt steers the UK “into the storm” 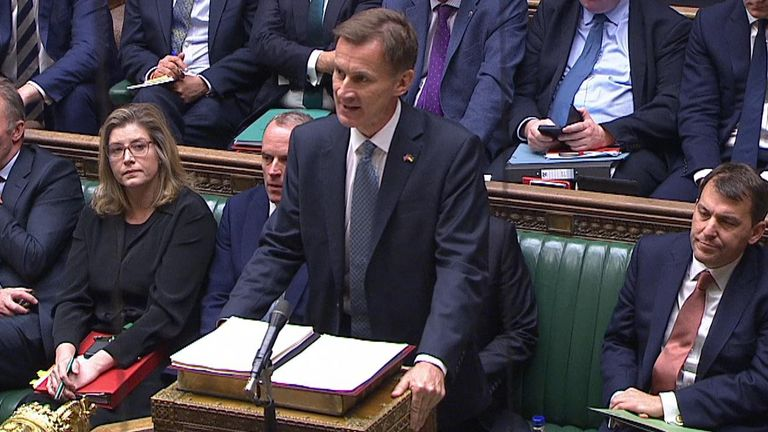 ON THURSDAY (Nov 17), the Chancellor of the Exchequer set out Westminster’s spending plans in light of the economic crisis engulfing the UK.

The UK is predicted to head into recession (see this week’s Politics section); inflation hit its highest level for forty years (11.1%) this month; meanwhile, industrial action looms across the public sector. All of which meant Jeremy Hunt had little room for manoeuvre.

Ultimately, his choices boiled down to cutting spending while increasing taxes. The only question was how he would sugar that pill.

A SPOONFUL OF SUGAR

To help the bitter medicine go down, Mr Hunt announced a couple of eye-catching spending pledges, claiming the government is taking action to protect the most vulnerable.

Firstly, benefits will rise in April in line with inflation, and the “pensions triple lock” remains in place. Benefits and Pension Credit payments will increase by 10.1% (the rate of inflation in September). Pensioners on the state pension will get the largest ever single rise in their state pension.

Those on means-tested benefits will get cost-of-living payments worth up to £900. Pensioners will get £300, and those on disability benefits £150. Those reliant on fuel oil will get £200 as a support payment.

The Chancellor capped social housing rent rises in England at 7%.

The Chancellor confirmed that, from next April, the minimum wage will increase from £9.50 to £10.42 per hour next April.

Mr Hunt announced an increase in NHS spending in England of £6.6bn over the next two years. He also announced a £7.5bn to support social care in England over the same period alongside additional money for English schools totalling £2.3bn.

Those measures mean £3.4bn in funding will go to the UK’s devolved governments – although they are not bound to spend the extra money on the NHS, social care, or education.

However, to offset that jam, the energy price guarantee, which limits household bills, will rise from an average of £2,500 to £3,000.

That might not be the blow it initially appears. Wholesale gas prices are falling in Europe. That means Westminster could spend less than forecast on capping energy prices, reducing future spending pressure. Lower prices in Europe might give the government a small cushion for a softer landing on energy prices. Also, if other economic forecasts bear true, inflation is likely to begin falling next spring.

The Westminster government will cross its fingers and hope for those relative upsides.

The Chancellor went about raising money in the new old-fashioned way. He ensured taxes would go up without changing the headline rates of income tax. To do so, he froze the tax threshold for basic-rate Income Tax and the 40% Income Tax rate. Those freezes mean more workers’ pay will be taken in income tax when wages rise over the next few years.

The combined effect of below-inflation pay rises and the freeze in Income Tax thresholds amounts to a cumulative real-terms pay cut for all earners. The measure will increase the Treasury’s revenue, restrict spending as disposable income falls, and help drive inflation down by reducing demand.

The Chancellor also targeted those on higher incomes by cutting the threshold at which they start to pay the top tax rate from £150,000 to £125,140.

Inheritance tax is paid at 40% on estates worth more than £325,000 for an individual and £650,000 for a couple. The Chancellor froze Inheritance Tax thresholds until 2027-28. That means that provided asset values increase, mainly property, more estates are likely to be pulled into paying the tax.

Incidentally, the pension tax threshold was a major consideration when the former IPPG administration in Pembrokeshire County Council entered into an unlawful arrangement with former CEO Bryn Parry Jones. The plan aimed to help Mr Parry Jones avoid tax on his local government pension as his pension pot was close to the upper tax threshold.

In an unexpected move, the Chancellor hit shareholders and asset owners with a double whammy. He increased the tax on dividend incomes and reduced the threshold at which dividend payments became liable for tax. On top of that, Mr Hunt cut the threshold for Capital Gains Tax, drawing more people into paying tax, from £12,300 to £6,000 next year and £3,000 the following year.

From April 2025, electric vehicles will no longer be exempt from Vehicle Excise Duty.

Mr Hunt announced that from Jan 1 to March 2028, the Treasury will increase the energy profits levy (the “windfall tax” on energy companies’ excess profits) from 25% to 35%. At the same time, the Treasury will introduce a temporary 45% levy on electricity generators’ profits.

As a significant sop to SME business owners who face being clobbered by stealth taxes, the Chancellor offered a lifeline by extending rates relief and transitional arrangements for business rates.

THE ECONOMIC STORM AND THE BITTER PILL

No matter who was Chancellor for this autumn statement, they would have faced the same problems.

Although Kwasi Kwarteng’s and Liz Truss’s brief flirtation with the keys to the banana plantation added to the UK’s financial pressures by driving up the cost of government borrowing, the underlying economic picture is the same.

Orthodox market economics suggests the best way to control inflation is by taking action to restrict the amount of money available for consumers to spend. The principal methods of achieving that end are to increase taxes and interest rates to restrict spending and the use of credit. Although the concepts underpinning those propositions are fiercely disputed, governments raise money through selling bonds on international markets which depend on confidence in government finances, so-called “market confidence”. The way bond traders measure the risk of lending money to governments almost always rests on governments’ economic orthodoxy and potential for economic growth.

So, to satisfy the markets, the UK Government – already mortgaged up to and beyond the hilt – must convince financial markets it can “get a grip”.