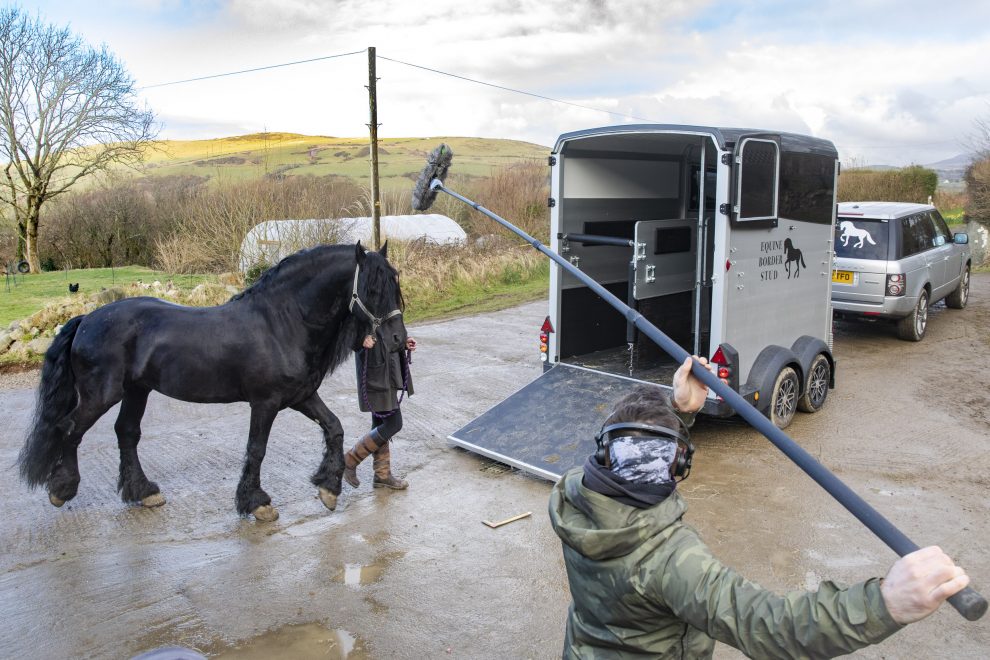 A trailer maker is celebrating after hearing that a gritty TV crime thriller featuring one of its horseboxes will be shown on Netflix UK.

S4C’s Dal y Mellt, hailed as a cross between Lock, Stock and Two Smoking Barrels and the Italian Job, will be the first Welsh language drama to be shown by the streaming giant and will air from April.

The HBX model provided by Ifor Williams Trailers, which has factories in Denbighshire and Flintshire, plays a key role in the six-part series.

The plot of Dal y Mellt, which will be called Rough Cut on Netflix, revolves largely around a magnificent, jet black stallion called Chief and a group of misfits as they come together to pull off a heist.

The show is based on the novel of the same name, written by Iwan ‘Iwcs’ Roberts, from Trawsfynydd, and set in rural Gwynedd, Cardiff and Soho in London.

The series made by Cardiff-based Vox Pictures was originally shown to great acclaim on S4C last autumn.

Among the stars is Mark Lewis Jones, originally from Rhos, near Wrexham, whose long list of screen credits includes blockbuster films like Master and Commander and Robin Hood alongside Russell Crowe, Game of Thrones and more recently, Keeping Faith, and the Welsh version of the hit TV drama, Un Bore Mercher (One Wednesday Morning).

In the series, Mark plays a shady character called Mici Ffin, who runs a garage and suffers from PTSD.

He added; “Superficially, he’s as cool as a cucumber but underneath, there are many problems. He’s a complicated man. That’s always good to play and he’s a lovable rogue which is always fun.

“The horse called Chief is like another character in the series. He’s pretty spectacular and that’s important because the character’s important and a big part of the story.”

Chief is actually a nine-year-old Friesian horse called Odysseus, named after the hero of Homer’s epic poem, The Odyssey.

The spectacular stallion will be familiar to millions of viewers from other TV shows and films like The Crown and Mary Queen of Scots.

He was supplied by Dolbadarn Film Horses which was based in Llanberis for many years but has now relocated to Abergele.

He said: To a large extent, Gronw drives the plot. Something quite tragic has happened in his family and he wants revenge. He wants payback.

“Although it’s a crime thriller, there’s also a lot of humour. The characters are warm and very Welsh.

“It’s like a cross between the Guy Ritchie film, Lock, Stock and Two Smoking Barrels, and the Michael Caine classic, The Italian Job, with a Welsh twist.

He said: “I am absolutely delighted that Dal y Mellt has been picked up by Netflix UK and is making broadcast history as the first Welsh language television drama to be shown by them.

“I knew immediately we were onto a winner when Iwcs sent me a copy of the manuscript which I read in one sitting because it was so gripping.

“I also want to pay tribute to the cast and the crew for doing such a brilliant job in translating the wonderful script into a compelling television drama series.

“The horse and the horsebox are central to the series. Gwyn Eiddior, our designer contacted Ifor Williams Trailers because he’d worked with them on a previous project, Prosiect Pum Mil.

“We’re very grateful that they agreed to support this production as well. It’s been a great experience for everybody concerned.”

The loan of the horsebox was arranged by Lois Wynne from Ifor Williams Trailers who was invited for a behind-the-scenes sneak peek during the shoot at Bryn Ifan Farm, near Clynnog, on the Llŷn Peninsula last summer.

She said: “We were delighted to have the opportunity to play a small part in making this flagship drama series happen and it’s wonderful news that the licence has now been bought by Netflix.

“Seeing the scenes being filmed gave me a fascinating insight into how everything works and it was great to see it all come together on screen.

“Importantly, the fact that the series is being aired by Netflix means that they are also providing a new platform and exposure for the Welsh language.

The news was revealed by Benjamin King, Netflix’s director of public policy, UK and Northern Ireland, when he was giving evidence to the Welsh Affairs Committee.

Mr King said: “I’m actually very pleased to be able to share with the committee this morning that we are soon to announce that we have licenced a wonderful show from S4C in the Welsh language – Dal y Mellt – which aired on S4C last year, and it’s coming to Netflix in April.”

He told Welsh MPs that content made in Wales and about Welsh culture “travels extremely well” to audiences across the world.

Mr King added Netflix could “play a helpful role in complementing the intent to promote and preserve the Welsh language”.