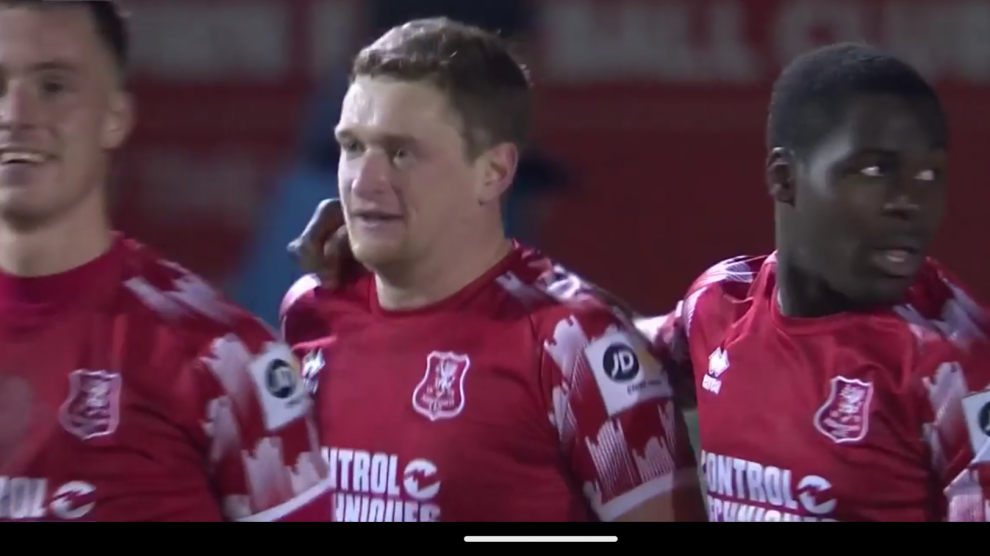 NEWTOWN all but guaranteed themselves a place in the top six for the second phase of the season on Friday night (Dec 30) as they thumped Aberystwyth Town 6-1.

The Robins have two games left to play but can still be caught by Haverfordwest County, if the Bluebirds win all three of their remaining games and Newtown don’t win their games.

Newtown won the Boxing Day fixture between the sides 2-1 thanks to two goals from Kieran Mills-Evans.

They enjoyed early possession on Friday night and went ahead in the fourteenth minute.

Nick Rushton cut back in from the byline and crossed to the back post. Aber’s Niall Flint attempted to clear the ball but only succeeded in thumping it into his own net.

It remained 1-0 until half time and Aber held hopes of getting something from the game.

However, the game turned in the space of 14 second half minutes.

Five minutes in the home side were awarded what seemed a harsh penalty. Aaron Williams sent the spot kick down the middle to double Newtown’s advantage.

Three minutes later it was three for the home side as Callum Roberts’ cross from the left was headed in at the back post by Nigel Aris.

The fourth goal was just another three minutes away. Louis Robles crossed from the right and the ball fell to Rushton on the edge of the box; he fired in to the top corner to all but seal the win.

In the 64th minute, Ryan Sears’ tame cross into the six yard box wasn’t cleared and it allowed Aris the time and space to run in and smash the ball in to make it 5-0.

Newtown were not done there and ten minutes later they added their sixth. From a free kick the ball fell to Rushton who saw an initial shot blocked but when the ball came back to him he took one touch to get himself around the defenders before firing home.

With ten minutes to go Aber pulled a goal back as John Owen’s cross wasn’t cleared and David Evans slotted the ball in.

It was just a consolation for Aber who must now be looking over their shoulder after a run of five straight defeats.

It means they are now just two points above the bottom two with games against Flint and Caernarfon coming up.

Aber’s next game sees them taking on Flint on Friday, January 6.

Newtown are in action on Saturday, January 7, as they host Connah’s Quay Nomads.