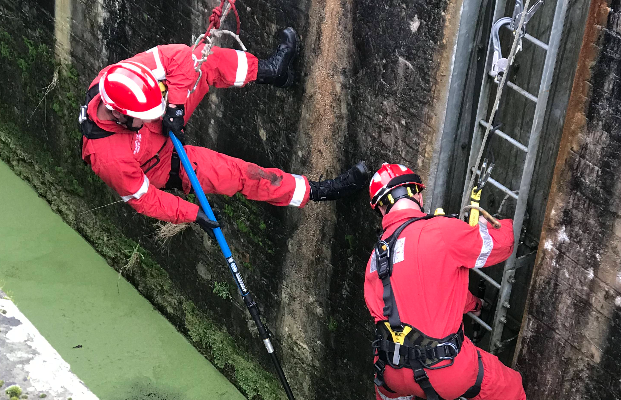 AN RSPCA officer has labelled helping two badgers trapped on a ladder in a Torfaen canal as “the most bizarre and unusual” day in her 15 years on the frontline.

The animal welfare charity teamed up with firefighters from the South Wales Fire and Rescue Service to help two badgers, who had – unfathomably – got stuck between metal steps and the wall, on Pentre Lane over the Monmouthshire and Brecon Canal in Cwmbran.

Video footage captures the badger’s plight and the moments they were saved.

RSPCA Cymru was called, with rescue officer Sian Burton and inspector David Milborrow rushing to the scene. They enlisted the support of the fire service as they sought to help the trapped badgers. The rescue took place on Friday (5 February).

A large animal rescue team from the South Wales Fire and Rescue Service attended, and abseiled down the canal wall, with their ropes tied to an RSPCA van for security. Inspector Milborrow got hold of one of the badgers using a grasper – while firefighters held nets below him for extra security.

The second badger jumped into the water as the first was rescued – causing “serious concern” for the RSPCA. However, the badger then, amazingly, climbed up the ladder and into reach of the grasper, where he was also pulled to safety.

Both badgers have now come into the care of the RSPCA for a period of rehabilitation before an anticipated return to the wild.

ARO Burton said: “Without doubt, this was the most bizarre and unusual day of my 15 years spent on the frontline for animals. These poor badgers were stuck fast between the ladder and high wall, with no route to escape and the canal waters below them.

“Fortunately, we were able to reach the badgers with a grasper, as firefighters abseiled down the wall and looked to usher the animals towards safety. After we got the first badger, the other fell in the water – which did cause us some serious concern. But he got out of the water – and climbed up the ladder, and we soon grabbed him too.

“Both badgers are a bit rough, and have some cuts – so have come into our care for some rehabilitation. We really hope we can release them back to the wild soon.

“We’re so grateful to the member of the public who spotted them – and the incredible firefighters and large animal rescue team from the South Wales Fire and Rescue Service. It’s a great advert of what we can achieve together for animal welfare.”

The badgers had initially been spotted by local resident Mandy Williams, who sounded the alarm after her dogs – Tara and Bella – showed an unusual amount of interest in what was happening at the canal wall.

Mandy said: “Last week, my dogs had spotted a squirrel at the canal – and when Tara went back there, I assumed she wanted to have another look. But then Bella ran over too, so I had a look myself – and was shocked to see two badgers staring back at me, trapped between the wall and metal ladder steps.

“They were wedged stuck and tightly together. I contacted the RSPCA – and waited with the badgers while they came. Occasionally, one would become loose and they’d fight a bit – so I did my best to reassure them.

“I don’t know if it’s because it is particularly slippy – meaning they’d fallen in, but both badgers were trapped and sadly without help there was no chance of escape from the canal.

“The fire brigade and RSPCA staff were absolutely marvellous – and I’m so happy to hear both badgers are doing okay and are now in safe hands.”

A spokesperson for the South Wales Fire & Rescue Service added: “It was lovely to work with the RSPCA on this rescue. It was a once in a lifetime experience, not only did we have the opportunity to save one badger, but two. We’re pleased we were able to support the RSPCA in rescuing them before they are returned to the wild.”

Should you wish to help the RSPCA with their rescue work, you can donate online.