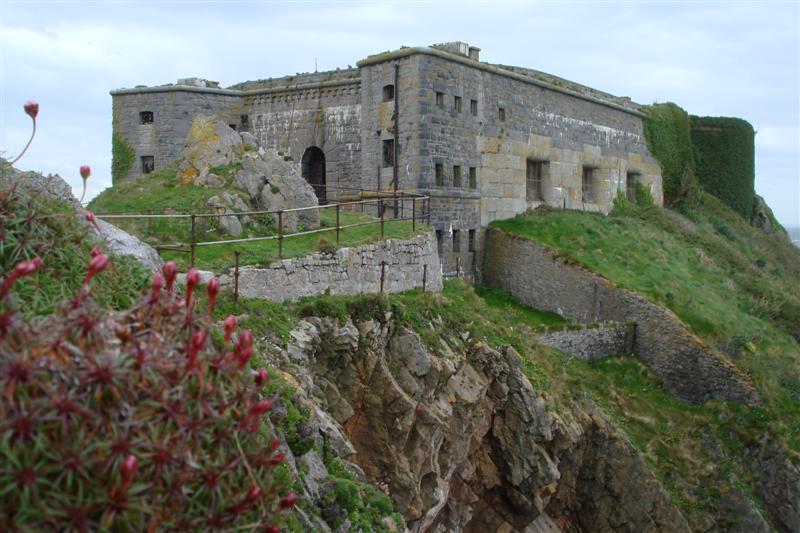 A special Pembrokeshire Herald report by Dennis O’Connor
SINCE becoming uninhabited in the late 1970’s, the corridors of one of South Pembrokeshire’s most iconic buildings are now once again beginning to echo with the ambitious sound of change.
Cutting through the red tape in order to progress plans to re-develop the fort at St. Catherine’s Island, located just off the foreshore at Tenby, is painfully slow but the Island project manager Pete Prosser remains hopeful that approval will be granted so that work may finally begin to open what would undoubtedly be a highly popular tourist attraction.
Built in 1870, the fort was constructed to repel foreign invaders, but its guns were not installed until 1886. It later became a private house before an anti-aircraft battery was installed at the front of the island during World War Two. Much later it became the unusual location of a zoo before the island was vacated in the seventies. It is the rich early history of the fort that the developer wants to once again bring to life.
After the breath-taking trek along the island, the vast granite and limestone fort is hugely impressive when viewed from the approach to the drawbridge. As you enter the building, senses are flooded with the history of the long narrow corridors and beautifully designed vaulted ceilings of the rooms. The tracks on-which the cannons moved are still visible and the significance of the positioning of gun slots throughout the fort provide rare snapshots of the town. Even in darkened recesses there is a real sense of safety within the old building.
Since becoming vacant, the fort has been plagued by trespassers, some of whom have accelerated the decay of this wonderful building by their selfishness. As a result, some rooms are in a pretty sorry state. However, despite this and being open the elements, the building remains defiant to these intrusions and progress can be made through the warren of corridors which reveal the sheer scale of the building. After climbing the steps which lead out to the top of the fort the natural instinct is to head for the nearest vantage point to take in the stunning views of nearby Caldey Island and the mainland and the views are truly magnificent.
Public access to the five-acre island and fort is strictly prohibited and it is not difficult to see why. After years of neglect and decay the area is not fully safe so this is the predominant issue which is being addressed by Pete Prosser and his team. They are dependent upon low tides and muscle power to transport equipment to the island and this means having to work a full shift whilst being cut off from the mainland but spirits are high and there is almost a tangible sense of excitement now that safety work is underway.
When full permission for the project is finally granted, visitors can look forward to an interactive experience which will bring the varied history of the fort to life through its themed rooms and characters.
Children will be able to explore the fort’s tunnels in safety while parents and grandparents enjoy the sense of history. There is even a plan for one room on the lower floor to be fitted with underwater camera controls to that unique access is given to the marine life around the island.
Over years, many people would have gazed at St Catherine’s Fort and would have longed to know what it would be like to see inside the garrisoned walls, so when the rare window of opportunity opened to meet Pete and his team on the island for a personal tour, it was the realisation of a little boy’s dream that has been many years in the making.
However, not everyone is happy with the proposal to save the building from total decay. If the plans were not sympathetic to the fort or its history then that would be understandable, but any opposition to the idea of preserving such an iconic historical monument should be viewed cautiously by the people of Pembrokeshire who also deserve to have the opportunity to be able to have their childhood dreams realised.