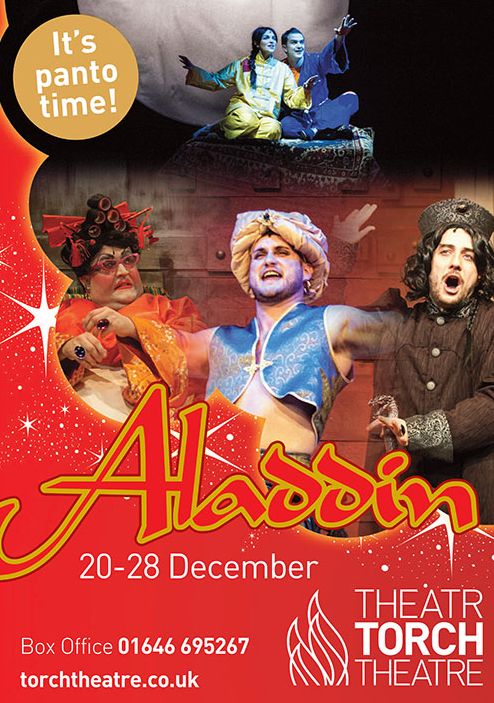 IT’S NOT Christmas until you see a pantomime, and where better to see it than at The Torch Theatre in Milford Haven?
Aladdin is yet another one of Peter Doran’s successful pantos, which is full of laughter, great songs and great fun. Aladdin begins with a mystical feel to it, where we are introduced to the ‘bad guy’ of the pantomime, Abernazer (Jordane Bernarde), who tells us that he needs to find “a male with an innocent heart who goes by the name of Aladdin” to fetch him a lamp from the Earth’s core.
We then have what we love about pantomimes with the “Hello boys and girls! I can’t hear you! I said hello boys and girls!”, which gets us screaming ‘hello’ at the top of our voices, creating the audience participation that we all love. Widow Twankey, played by Dion Davies, is the typical fabulous Dame and utterly hilarious. Jokes flying out left, right and centre keeping us all on our toes. A Welsh theme is held throughout the panto, with strong Welsh accents from some of the characters with a few jokes here and there and a few Pembrokeshire place names mentioned. Every musical number has been put together well. They fit the mood perfectly and have brilliant harmonies between the people singing them. A song between the Genie (Lloyd Grayshon) and Princess Samina (Kate Jarman) shows gorgeous harmonies between their two voices and complement each other very well.
The whole cast entertain the audience with classic panto sketches, with double meanings bringing ‘fork handles’ to mind. Abernazer sings of how he wants to abolish Christmas should his plans of becoming Emperor go smoothly, gaining a fair amount of boos and hisses from us – especially the children! The lighting is fantastic and sets the scenes beautifully with bright and vibrant colours throughout. All in all, Aladdin is a must-see pantomime and can be enjoyed by anyone, any age that will have you laughing all the way through.
Aladdin – Sion Ifans; Widow Twankey – Dion Davies; Abernazer – Jordane Bernarde; Emperor of Peking – Chris Morgan; Princess Samina – Kate Jarman; Genie – Lloyd Grayshon; PC Ping – Jimmy Whittaker.