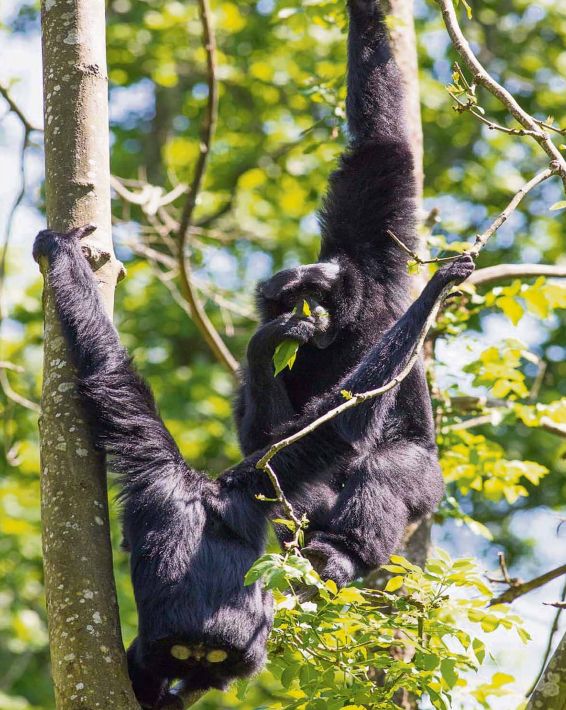 The fundraising efforts were part of the EAZA (European Association of Zoos and Aquaria) South East Asia campaign. Zoos across Europe work together to raise awareness and funds for conservation projects worldwide, and efforts in 2013 focussed on the plight of habitats and species in South East Asia.

Steve, Lisa and Bryn the gibbons, some of the most iconic residents of Anna’s Welsh Zoo, hail from South East Asia. Many of their fellow countrymen are at serious risk of extinction. The Western Hoolock Gibbon is one of the true ‘acrobats’ of the forest, but their population has declined by more than 90% over the past years, and it is now one of the 25 most endangered primate species in the world. Capture also presents a significant problem to the Siamang, which is one of the most heavily targeted gibbon species in the illegal pet trade. The mother is typically shot to obtain the young Siamang for sale. Zoos across the world are working together to maintain an ‘insurance’ population of Siamang gibbons, which could be used to strengthen the wild population if required.

The flagship species of the South East Asia campaign was the Saola. The Saola is also listed as critically endangered on the IUCN Red List, and can only be found in a thin strip of forest between Vietnam and the Lao People’s Democratic Republic. Scientists only found out about the Saola in 1992, and it is considered ‘the greatest animal find of recent times’. Photographed in the wild only three times, very little is known about the Saola. With its small range, it is threatened by habitat loss, hunting and snaring.

The zoo raised over £2900 for projects to protect animals like the Western Hoolock Gibbon and the Saola. This will go directly to fund things like field equipment for rangers, batteries for camera traps and snare removal by community forest guards.

The majority of the money was raised at the ‘Explore South East Asia’ event at the zoo in July. The event saw the zoo opened from 4pm – 9pm for a one-off low entry fee, and all takings at the gate went directly to the EAZA campaign. Nearly 500 people visited the zoo for the event and enjoyed keeper talks on the South East Asia campaign projects, lectures from experts who have visited the region, South East Asian specials in the cafe, and live music from local musicians on the Park’s very own Dragon Stage (formerly of Glastonbury fame!)

Anna’s Welsh Zoo is open weekends in December and January, and every day during the Christmas holidays (excluding December 2426 and New Year’s Day).

Special events for the Christmas holidays include Christmas-themed story telling in the Manor on Sunday, December 22 at 12 noon and 2pm, helping the keepers to make enrichment treats for the animals on Saturday 28 and Sunday 29 December and a family friendly introduction to artic animals by local naturalist and polar guide, Mick Brown, on Saturday, January 4 at 12 noon.