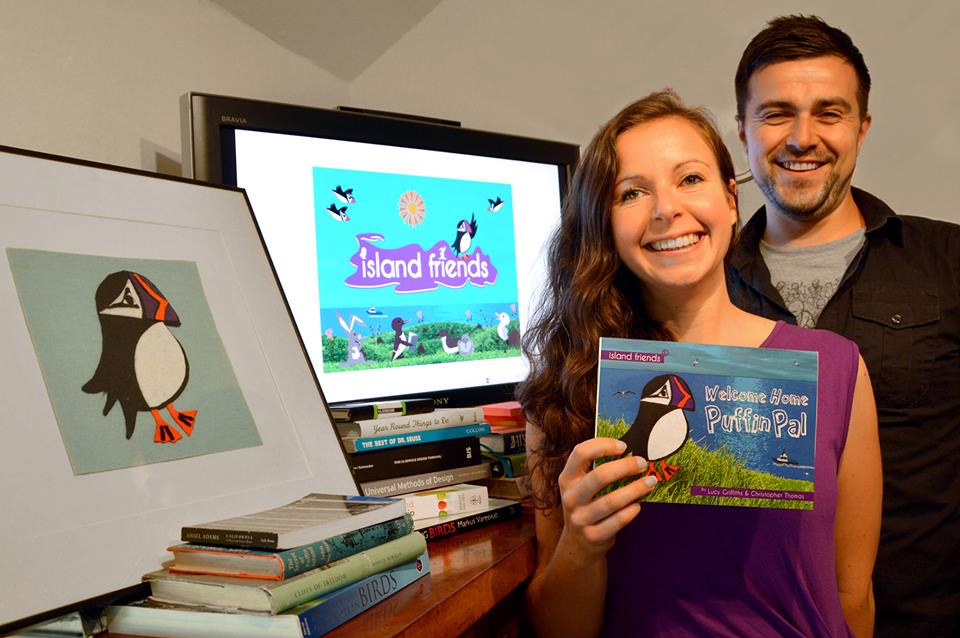 PEMBROKESHIRE’S famous puffins and the other island wildlife on our local islands are the lead characters in a new series of children’s books by Lucy Griffiths from Marloes and her co-author and designer Christopher Thomas.

The initial print run will be funded by a  ‘Crowdfunding’ campaign using the popular online site ‘Kickstarter’ which helps creative people get their projects off the ground by taking pledges from backers who receive rewards for their pledges.  The campaign which launches this week offers backers the opportunity to pre-order copies of the books via the site, and if it’s successful in achieving its £1000 target the books will be printed here in Wales and despatched in time to be sent out as Christmas gifts.

The pair created their first three books as a way of encouraging very young children to learn about nature whilst also developing an adventurous, enterprising and independent approach to life.

They are keen supporters of the Wildlife Trust of South and West Wales and are planning to create educational materials using the characters from their books that will help the Trust reach out to young children with their messages about conservation.

Lucy and Chris are both lecturers at the University of Wales Trinity St David, where they run enterprise education and career development workshops to encourage students to take an enterprising approach to their careers.  However, in order to reach beyond the students they work with at the University they set up their Social Enterprise ‘We Are Lucky’ to provide resources and experiences based on the principle that you ‘make your own luck’ in life.

Lucy says ‘I was born and raised in Marloes, so the puffins and other wildlife on Skomer and Skokholm have played an important role in my childhood.  Through these books I’d like other young children to learn about the amazing natural resources we have here in Wales, whilst also developing some of the wonderful  enterprising characteristics these birds show in adapting and surviving in difficult conditions.’

Chris said ‘We hope anyone who loves Pembrokeshire’s wildlife, and the messages behind these stories will back us by pledging their support to the Kickstarter campaign.’

Further information about the project can be found at: www.wearelucky.org